Today, 6th June 2017, marks the 73rd anniversary of the landings of D-Day. The largest amphibious military operation ever mounted, by the end of D-Day, the Atlantic Wall had been breached with the US Army's V Corps firmly entrenched on French soil.

Below is an extract from Campaign 100: D-Day 1944 (1) by Steven J. Zaloga, which also features excellent artwork by Howard Gerrard.

The four companies of DD tanks were supposed to be launched from LCT6s around 0530hrs to give them time to swim the 5,000 yards to shore by H-Hour – 0630hrs. The naval officer in charge of the eight craft carrying the DD tanks of the 743rd Tank Battalion was convinced that the water was too rough for the tanks to swim ashore and reached agreement with the tank commander to land the tanks directly onto the beach. The LCTs landed the DD tanks on Dog Green and Dog Red beaches starting at 0629hrs. Company B, coming into the beach at the Vierville draw (Exit D-1), came under heavy anti-tank gunfire. The LCT carrying the company commander was sunk immediately offshore and four other tanks from the company were disabled before reaching the beach. Machine-gun fire from the German pillboxes damaged several other LCTs but all withdrew safely. Company A with the normal M4 tanks with wading trunks landed about the same time, so that 40 out of 48 tanks made it to shore. 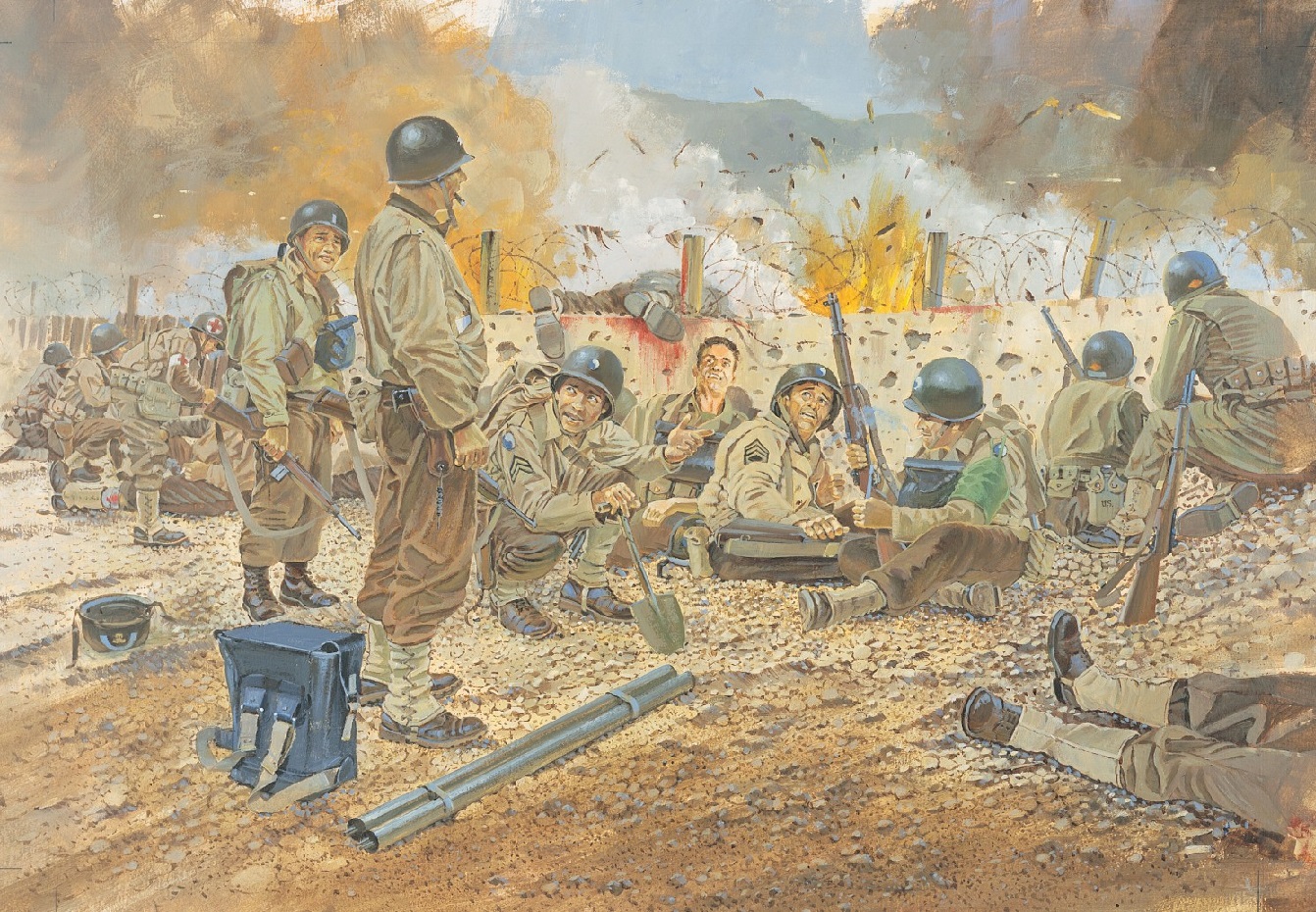 Dog Red Beach, 0740hrs - Brigadier General Norman “Dutch” Cota, and the 116th Infantry commander, Colonel Canham, land on Dog White with the second assault wave. They find the troops from the first wave leaderless due to the heavy losses among officers and NCOs.

To the west the situation was much worse. The two captains from the 741st Tank Battalion outranked the senior naval officers and insisted that the DD tanks be launched as ordered 5,000 yards offshore at 0540hrs. The DD tanks immediately encountered problems on entering the water, a few sinking immediately when their fragile canvas screens collapsed. They valiantly tried to swim ashore, but the combination of wind and sea conditions and tidal currents sank all but two tanks from Co. B. Of the tank crews, 33 drowned while the rest were rescued by accompanying vessels. Having watched the first of the four DD tanks on his craft sink immediately after leaving the ramp, the young skipper of LCT-600 decided to drop the remaining three on the beach. As a result, of the 32 DD tanks of the 741st Tank Battalion only five made it to shore on Easy Red beach. Following the two doomed companies of DD tanks was Co. A with M4A1 tanks with wading trunks; each LCT carrying two regular tanks and a dozer-tank. The luckless 741st lost two M4s and an M4 dozer-tank when their LCT struck a mine and sank. As a result, only 18 of its 48 tanks reached shore and three were knocked out by anti-tank guns almost immediately. In spite of their losses, the tanks attempted to carry out their mission and began engaging the various bunkers and defensive works.

The first assault wave, consisting of 1,450 men in eight infantry companies and the Gap Assault Teams, began landings at 0631hrs. Each LCVP or LCA usually carried 31 men and an officer, with six landing craft to a company. Few of the LCVPs made dry landings, with most grounding on sandbars 50–100 yards out. As the ramps dropped, the landing craft were subjected to a fusillade of machine-guns and gunfire. Some GIs had to wade through neck-deep water under savage fire the entire way. The troops in the assault wave had been issued much more equipment than normal infantry, including explosive charges and additional supplies, which made the passage through the surf especially difficult. Exhausted and sea-sick, when the survivors reached the water’s edge there was little refuge. The expected bomb craters were nowhere to be seen and it was a 200-yard dash to the only reliable cover – the shingle and seawall. Many troops simply collapsed, or tried to find cover behind the numerous beach obstructions.

The conditions varied from sector to sector. Company G, 116th RCT landing west of the D-3 Les Moulins draw faced far less gunfire than on other beaches as grass fires started by the naval bombardment helped obscure the landing area. Company F, landing immediately in front of the D-3 Les Moulins draw were partly shielded by the smoke, but the three sections furthest east were exposed and suffered 50 per cent casualties by the time they reached the cover of the shingle. Company A, 116th RCT and Co. C, 2nd Rangers, landing furthest west on Dog Green opposite the D-1 Vierville draw, were slaughtered by the most intense fire encountered in any landing area in the 116th RCT sector. Not only was there a concentration of fortifications in the draw itself but there 50 was enfilading fire from the WN72 and WN73 strongpoints on the Pointe-et-Raz-de-la-Percée promontory on their right flank. The first Co. A landing craft grounded about 1,000yds from shore in deep water and few men made it to the beach. One LCA was hit by four mortar rounds in rapid succession and disintegrated. Every single soldier in the company commander’s LCA was killed. Within moments most of the company’s officers and NCOs were dead or wounded and two-thirds of Co. A, 116th Infantry were casualties. The 1/116th Infantry lost three of its four company commanders and 16 junior officers before even reaching the shoreline. Leaderless and under intense fire, the survivors clung to any protection available, mainly the beach obstacles. The company from the 2nd Rangers lost 35 of their 64 men before reaching the base of a cliff at the eastern edge of the beach. (The slaughter depicted in the opening sequence of the film Saving Private Ryan depicts this beach.) 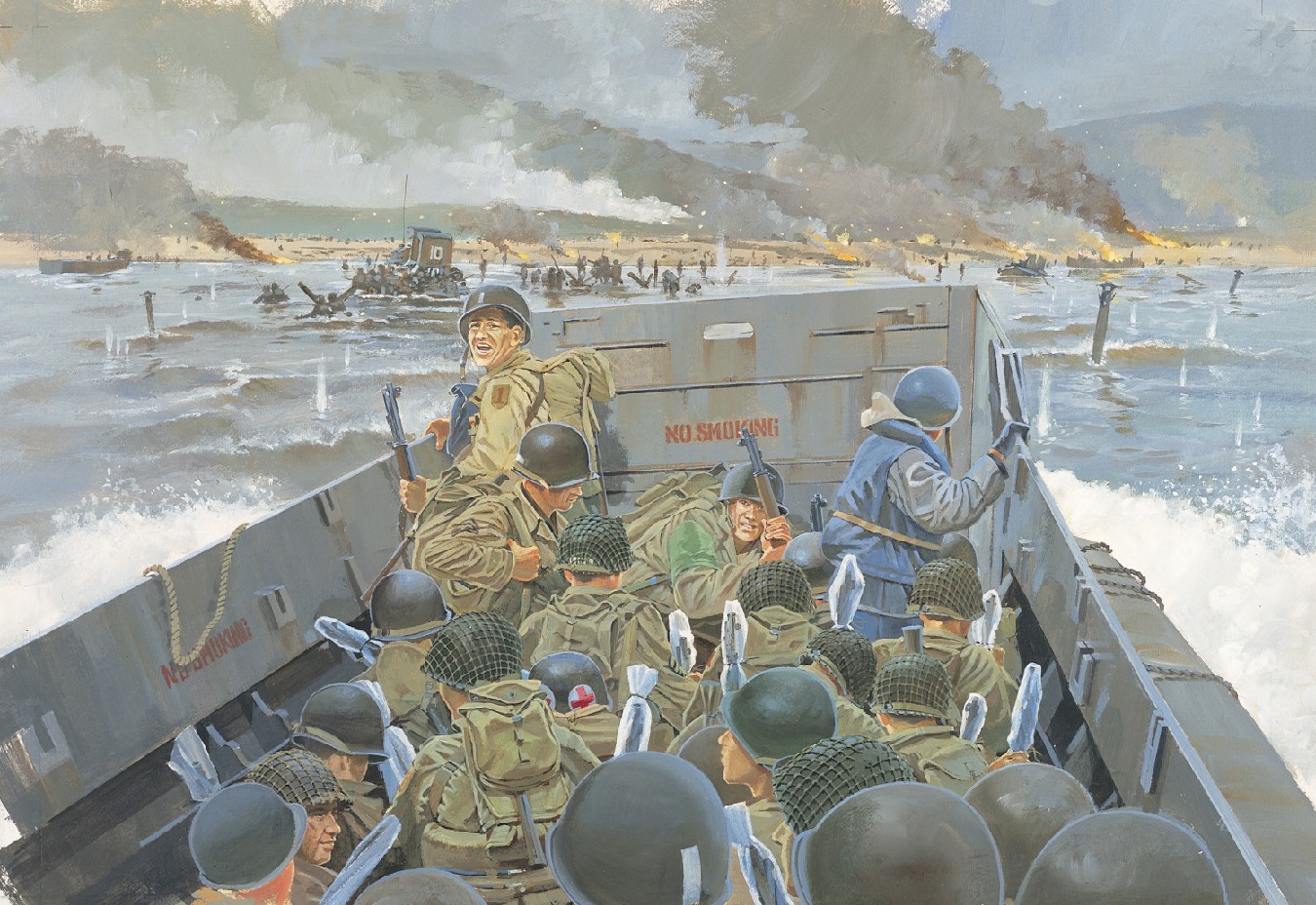 On the beaches to the east assaulted by the 16th RCT the situation was bloody chaos. Problems with the control craft and the strong current caused many landing craft to drift eastward and many units landed far from their objectives. The landings on Easy Red between the St Laurent and Colleville draws were the most weakly defended and two sections of Co. E, 16th RCT made it to the shingle with modest losses but with few items of heavy equipment, which were abandoned while swimming ashore. A section from Co. F landing further east came under heavy fire when disembarking from their LCVP in neck-deep water and only 14 men reached the shore. The fire was much more intense on Fox Green beach to the east where Co. F, 16th RCT put ashore, opposite the heavily defended E-3 Colleville draw. Most of the casualties occurred after the ramps were dropped when machine-gun fire from the bunkers cut a swathe through the disembarking troops. On one LCVP only seven of the original 32 GIs reached the beach. Within moments Co. F had lost six officers and half its troops. Company E, 116th RCT had the misfortune of being further from their assigned beach than any other, and landed on Fox Green. They lost a third of their men, including the company commander, before reaching the shingle.

The two other companies of the 16th RCT were also scheduled to land on Fox Green, but Co. L wandered too far east and arrived 30 minutes late at the eastern extreme of Fox Green. Although suffering 35 per cent casualties, it was the only company of the first assault wave to remain a coherent unit. Company I became even more disoriented and drifted much too far east before their navigation was corrected. They landed 11 /2 hours late in front of the cliffs at the easternmost edge of Fox Green.

The heavy losses amongst the infantry were also suffered by the critical Gap Assault Teams. Team 11 landed in front of the E-1 St Laurent draw and, while dragging ashore their rubber boat loaded with explosives, artillery hit the demolition charges, obliterating the team. Team 15 near the E-3 Colleville draw suffered the same fate and an artillery round struck the explosives of the neighboring Team 14 while still aboard the LCM, killing the entire navy contingent. Team 12 managed to plant their explosives on the obstacles on Easy Red beach but hesitated to detonate them due to the many wounded infantrymen near them. A mortar round hit some primacord, setting off the charges and killing or wounding most of the team and many of the nearby infantry. Team 13 was working on obstacles when German fire set off some of the charges, killing the Navy section of the team. Team 7 was ready to breach a set of obstacles when an LCM crashed into the outer barrier, setting off seven Teller mines. Although these teams were supposed to be supported by M4 dozer-tanks, only six of the 16 made it ashore safely and three of these were quickly knocked out. By the end of the day only one dozer-tank was still operational. In spite of the heavy losses in front of the E-3 Colleville draw, several gap teams landed further east than planned due to the tides and so helped blow four adjacent gaps along the beach between the E-1 and E-3 exits. This accomplishment would prove crucial later in the day, since this was the only gap wide enough to accommodate a large number of landing craft.

If you'd like to read more about the Normandy landings, we have a long list of titles that focus on D-Day:

Don't forget this month our General Military titles, along with General Aviation and Games, are 25% off, which includes the following D-Day Generals: