Thomas McKelvey Cleaver is a published author and Hollywood screenwriter with a lifelong interest in the Korean War. His latest book, The Frozen Chosen, is the product of 25 years of research into the legendary battle that would come to be known as 'the Corps' Finest Hour'.

The battle of the Chosin Reservoir, better known in history as the Breakout from Chosin, is one of the very few battles in history that have become truly legendary. Historians have compared it with the 2,500 year old story of the ten thousand Greeks, told in Xenophon’s classic The Anabasis.

Chosin has become mythological to Americans because it fits so perfectly within the heart of the national self-image: that Americans are at their best in the most difficult circumstances. 20,000 Americans - the cream of the United States Marine Corps - opposed by over 100,000 veteran enemy soldiers in a fight to the death. That Chosin occurred in the midst of what former Secretary of State Dean Acheson described as “the greatest defeat of American arms since the Second Battle of Bull Run” and historian Sir Martin Gilbert described as “the greatest defeat of a previously-victorious Army in recorded history” only adds to the mythology.

The facts differ from the myth, but they do not detract from the achievement. They enhance it.

On June 25 1950, when the North Korean People’s Army crossed the 38th Parallel that divided the peninsula, the U.S. Marines were at their lowest point in their history with their very existence in question. The Corps was a shadow of the force that had smashed the Japanese in the Pacific War a mere five years earlier; the overwhelming majority of the men who had accomplished that were long returned to their civilian lives. There was a very great possibility in the aftermath of “service unification” into the Department of Defense two years previously that the Marines might well be disestablished and made a part of the United States Army. Manpower was so low, with only 28,000 men in the active-duty force, that the third platoon of every company, third company of every battalion and third battalion of every regiment had been disbanded. Fewer than one man in ten in the hastily-formed First Marine Division had seen combat. A Marine and his dog
Photo: Donald Douglas Duncan

The Marines at Chosin were not “the cream of the Corps.” Over three-quarters of them were reservists who had been called up from their civilian lives in the wake of North Korea’s invasion of South Korea. Many had yet to go through boot camp when they arrived at Camp Pendleton in July 1950. Second Lieutenant Joseph Owen remembered them as “civilians in ill-fitting uniforms.” The training schedule they were subjected to included sixteen-hour days, seven days a week for the four weeks the First Marine Division had to assemble itself and prepare to ship out to Korea. Yet at the end of that time Lieutenant Colonel Raymond Davis, commander of the First Battalion of the Seventh Regiment, recorded in his diary that “They don’t look like Marines, but there is a good possibility they can perform like Marines.”

Ten days after receiving the initial activation order, the First Marine Regiment, reinforced with a tank company, engineers, and two squadrons of F4U Corsair fighter-bombers to become the First Provisional Marine Brigade, left San Diego for Korea. They arrived in Kobe, Japan, at the end of July 1950.

At the time, Korea was such a disaster that the top levels of the United Nations Command were thinking of a complete withdrawal from the peninsula. The U.S. Army units committed to oppose the invasion, softened by years of occupation duty in Japan where a private could afford a Japanese servant and where most men had not seen actual military training in the entire time they were in the country, melted like snow subjected to steam when they were sent into battle against the battle-hardened veterans of the NKPA, most of whom were veterans of the Chinese Civil War that had only concluded with a Communist victory a year before. By the time the Marines arrived, the UN forces were trapped inside the Pusan Perimeter, a shrinking defense line around the last port in the country in UN control.

The Provisional Marine Brigade entered combat on 7 August 1950, the eighth anniversary of the Marine invasion of Guadalcanal. In three hard-fought battles over the course of the month of August, culminating in the Second Battle of the Naktong, the 1,500 Marines, with the close air support of their beloved Corsairs, turned the course of the Korean War. In the process, they saved the Marine Corps; there has never since been any proposal to turn Marines into soldiers. The leading role of the Marines continued, with the rest of the First Division arriving in time to lead the invasion of Inchon on 15 September 1950, MacArthur’s brilliant move that reversed Western fortunes in the Korean War. Had MacArthur stopped at the 38th Parallel when UN forces got there at the end of the month, he would have fulfilled the objectives of the UN Security Council declaration; victory could have been declared and the result would have been a political world that likely looked much as it does today on the Korean peninsula.

However, MacArthur had a grander goal: a “rollback” of Communist forces through an invasion of North Korea. By now it was politically impossible for his civilian commanders back in Washington to stop such an event, since to do so would open them to charges of being “soft on communism” by the newly-hatched demagogue, Senator Joseph McCarthy. When Chinese Premier Zhou En-Lai issued a warning against UN incursion into North Korea, MacArthur ignored the warning and his headquarters continued to do so even as a force that eventually numbered over 250,000 soldiers of the “People’s Volunteer Army” entered North Korea without American intelligence taking notice.

The stage for the greatest American military defeat was set.

Nothing would stop MacArthur’s determination to “liberate” North Korea. When he was asked in a Tokyo press conference about the Chinese actions, he downplayed them and reminded his audience that “No Chinese army has ever been able to stand against a Western army.” Shortly thereafter, he issued his famous promise that “the boys will be home by Christmas.”

At the end of the month of November, the Chinese forces struck UN forces across North Korea in the immediate aftermath of the greatest blizzard to roar out of Siberia in a century, plunging temperatures across the peninsula far, far below freezing. The U.S. Eighth Army was forced into a retreat that became a rout, with millions of dollars of supplies set alight, and thousands of American, British and other troops wounded and left behind to be captured and become prisoners of war, with thousands more killed and their bodies left on the battlefields. This was the defeat that Secretary of State Acheson termed “The greatest defeat of American arms since the second battle of Bull Run.” 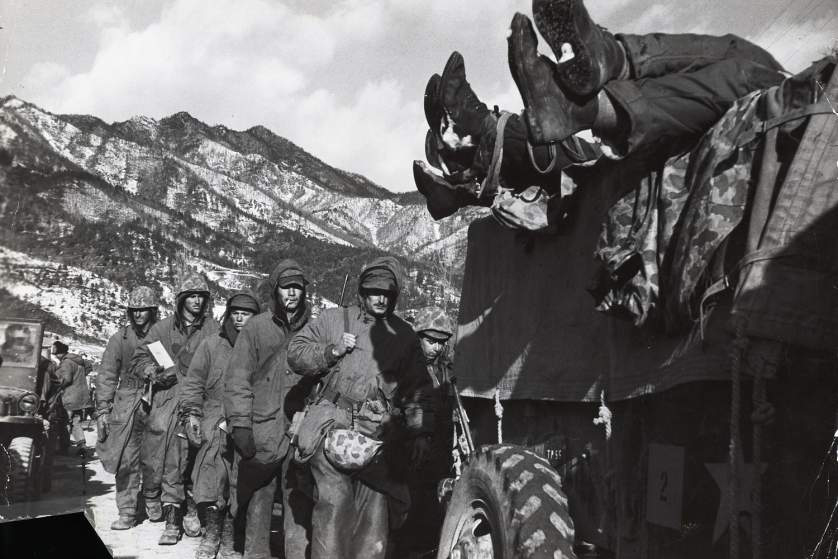 In eastern Korea, the Marines were stretched along the road through the Chosin Reservoir. By pure luck they had rearranged their forces and positions on the day in which the Chinese planned to attack that night. Chinese observers, lacking radios, were unable to inform their leaders of these changes. As a result, in a week’s continuous fighting, the Marines were able to hold their position at the reservoir, and then extract the Fifth and Seventh Marines out of the reservoir to Hagaru in a 96-hour battle in waist-deep snow that cost the Marines 100 men for each of the eleven miles they fought through Toktong Pass.

Eventually the Marines would make their way out of the mountains of North Korea to the port of Hamhung, where they were evacuated to Pusan. The Chinese troops had failed Mao Tse-Tung’s order to destroy the Marines “to the last man.” In the midst of American defeat, the Marines had created what has been known ever since as “The Corp’s Finest Hour.”

I began my research of this story nearly 30 years ago, planning to write a screenplay. I had the good fortune to be put in contact with many of the main players in the event and was able to interview them in depth. I asked questions the usual historian might not, like how the event known as “The Singing Marines of Hagaru” happened; if I couldn’t create that correctly, the event would bring any proposed movie to a screeching halt. General Ray Davis, who led those men, told me how it happened (as he put it, “nobody ever asked me that question before’), and it is here in the book.

Unfortunately, although everyone who read the screenplay liked it, the challenge of doing it (“You’ll need to shoot this in the eastern Sierra Nevada in mid-winter”) led to its demise. I kept my materials, and never forgot the story. In the years since, with the end of the Cold War, the other side of this battle have now published their information, and as well the records of the U.S. military regarding the campaign can now be found in searchable online databases. Thus, when I came to write the book, I had access to the complete story.

The full truth about Chosin only adds to the lustre of the Marines’ reputation. The Breakout from Chosin is indeed one of the epic tales of battle in world history.