On 31 January 1945 a reinforced Japanese infantry battalion launched a fierce surprise assault on the 3rd Commando Brigade, who had been tasked with holding Hill 170. Fighting continued throughout the day, with heavy MG and artillery fire raining down on the Allied positions and Japanese assault engineers undertaking suicidal missions to take out Allied tanks. Savage hand-to-hand combat raged as the British troops fought tooth and nail to maintain their position.

Victory at the Battle of Hill 170 would be a key factor in the fate of the Japanese 28th Army in Arakan, but it came at a heavy price. The 3rd Commando Brigade lost 45 officers and ORs killed and a further 90 wounded. Japanese dead exceeded 340.

The photograph below shows the 3rd Commando Brigade coming ashore during the Burma Campaign. 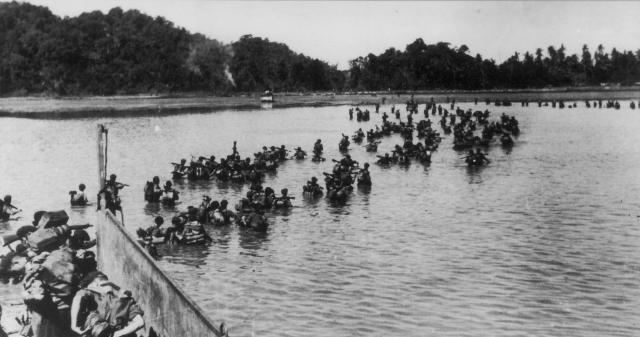 If you’d like to read more about this battle, take a look at Battle Orders 18: British Commandos 1940 – 46 by Tim Moreman.