Today is St Patrick's Day, a cultural and religious celebration commemorating the traditional death date of Saint Patrick. Obviously we at Osprey have to celebrate in our own way, so here is a glimpse into the military history of the Irish.

Please use the links at the bottom of each page to navigate through the pages. 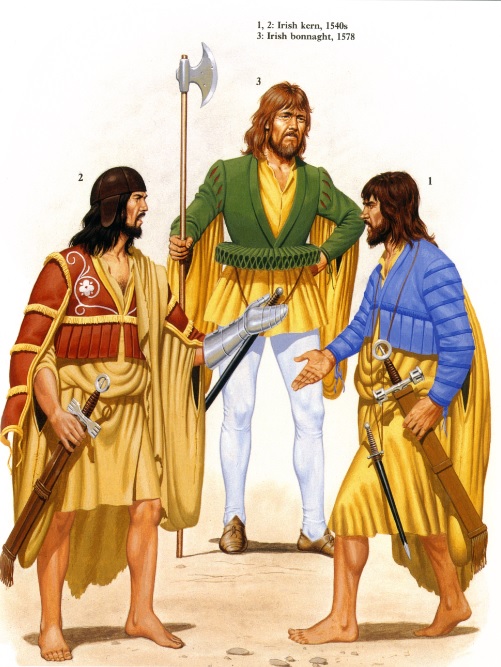 These wear the traditional voluminous baggy-sleeved, saffron-dyed leine under embroidered, fringed jackets, and the characteristic shaggy woolen mantle, the brat (not usually worn in battle). The hair is worn long, often hanging over the face, the English regularly attempting to ban such 'glibbs' as being a disguise 'to hide their thievish countenances'. Though 2 has an apparently leather helmet, most kern relied instead for protection on the 'thickness of their glibbs, the which they say will sometimes bear a good stroke'. Typical weapons were the sword, dagger (sgian or 'skein') and two to four darts, bow or axe. The darts were often fletched. Note that 2 wears an iron gauntlet on his left arm, used in place of a sheild to parry blows; others wrapped their cloak around the arm instead.

The leine is now shorter than before and heavily pleated - Edmund Campion described such shirts in 1569 as 'not reaching past the thigh, with pleats on pleats they pleated are as thick as pleats may lie'. His axe is of the traditional galloglass type, in whose imitation many native Irish hired soldiers appear to have adopted it.