On 2 May 2011 the ten-year manhunt for Osama bin Laden came to a dramatic end. Operation Neptune Spear saw a group of SEAL special forces storm the hideout and kill the world's most notorious terrorist in one of the most high-profile and complex raids in history.

The plate and extract below are taken from the Raid 45: Killing Bin Laden by Peter F. Panzeri Jr. 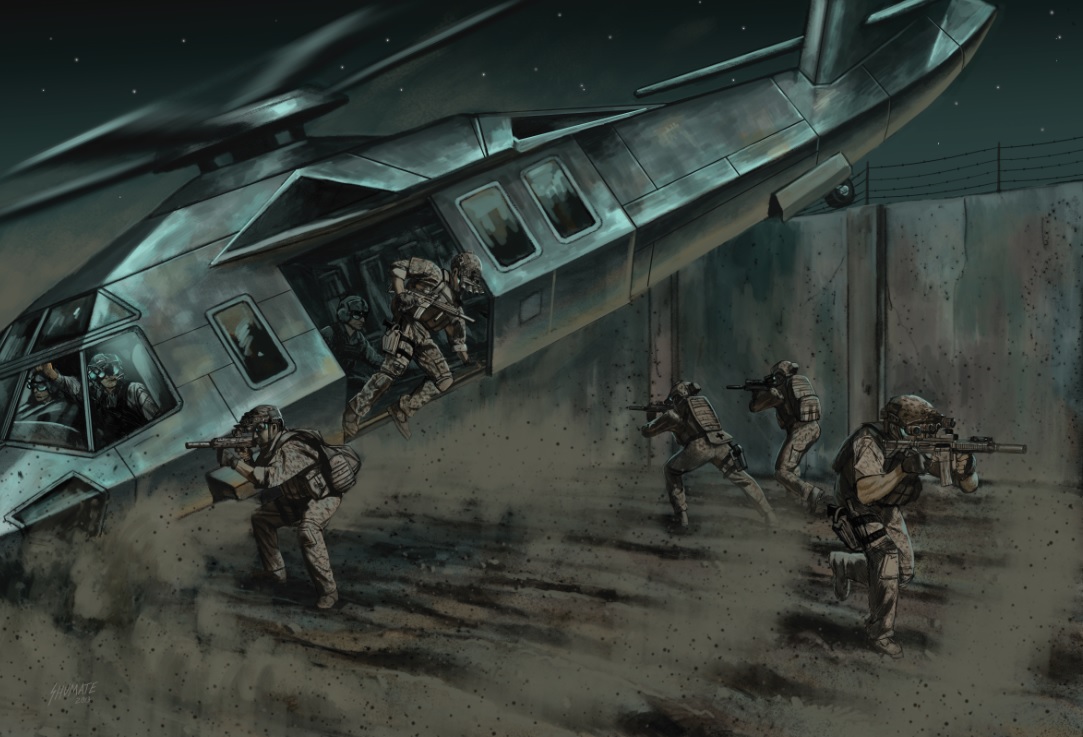 One night in Abbottabad

This scene depicts the recovery from the potentially disastrous mission failure that occurred just after 0057 hours, when the MH-X pilot avoided a catastrophic crash and made a hard landing into bin Laden’s garden, “E Courtyard,” and the aircraft’s nose dug into the soft dirt. The pilot can be seen quickly shutting down the aircraft’s rotors as he balances the rotor tail on top of the 9ft-high concrete security wall. Rotor blade tips beat into the courtyard dirt and kicked up a great deal of debris and dust. With no one injured, the crew chief shouted “GO! GO!” and the squadron assaulters jumped clear of the aircraft into an offensive tactical posture.

The first man to exit was SEAL “Mark Owen” (seen to the right, with sleeves cut off just below the arm pockets). He jumped out of the crashing helicopter and sprinted to the south corner of courtyard E without looking back. The other assaulters reached the ground and immediately began moving in the opposite direction toward the compound’s main buildings. Within seconds the helicopter was stabilized and shutting down. The team redirected focus toward the main buildings and the mission objective: Osama bin Laden. Some of the SEALs carry the Heckler & Koch (HK) MP7a1 submachine gun with 40-rougn magazine, night vision scope, infrared laser pointer, white-light torch and silencer. Other SEALs carry the HK 416 (5.56mm) assault rifle with 10.4in barrel. At least one SEAL sniper is on this team with a 7.62mm HK 417 with 12in barrel, sniper-scope and night vision adapter, Harris bipod and silencer. As seen here, every seal is packing a 9mm Sig Sauer P226 pistol with silencer in a leg holster, along with extra ammunition, as a secondary firearm.