Vesa Nenye, one of the authors of the recently released Finland at War: The Continuation and Lapland Wars 1941-45, took some time out to answer a few questions about the book.

Throughout the book there are a number of mini-biographies of high-ranking officers from the German, Finnish and Soviet armed forces. Did any of them stand out from the others as an individual of particular interest for you?

Some of the Finnish commanders and heroes like Lauri Törni (pictured left) and Börje Brotell were delightful to research, and to be honest the short biographies don't really do justice to all that they accomplished and went through. Personally Paavo Talvela was naturally interesting due to the family ties we share. We also enjoyed finding out about the Soviet Commanders, who in many cases were exceedingly difficult to track down and find details on. In the process we ended up going deeper into the histories of the Soviet Rifle Corps and Armies than we expected, which in turn gave us more a feel for all that those units ended up going through.

Your author biography mentions your family’s illustrious military tradition. Was your family directly affected by the Continuation and Lapland Wars, or the Winter War that preceded them?

My family was active during the Civil War and liberation movement, and remained active from there on. They were involved in the business and politics of the country, and here are some of their stories in brief. 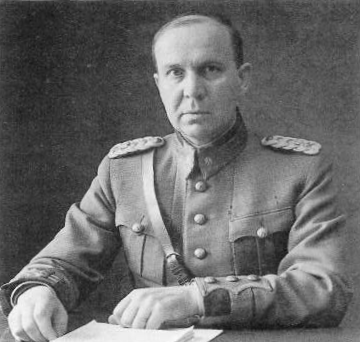 Undoubtedly the most influential was my Grandmothers uncle, Lieutenant General Paavo Talvela (pictured right). His military successes and bravery saw him made a Knight of the Mannerheim Cross, and his diaries from Hitler’s headquarters are an amazing read. Throughout the Continuation War his son Martti Talvela acted as his aide.

My grandmother’s brother, Heikki Talvela, was in the artillery, whilst my grandmother herself worked as a Lotta Medic in our family mansion, which had been converted into a military hospital during the Winter War.

My grandfather on my mother’s side was a scribe and messenger of the 7th Jäger Brigade. His religious views forbade him from carrying a weapon but he still wished to serve on the front lines. As the war came to an end other officers were pushing for all unarmed men to take up a rifle or be shot, and a list was written up that included my grandfather’s name. Before they could be executed, the unit commander Colonel Adolft Ehrnrooth personally amended the list by writing that each of these men had acted heroically under fire, thus saving their lives.

From my father’s side my grandfather was a military chaplain who narrowly avoided death. My grandmother’s brother, Lieutenant Pekka Talvela (nephew of Paavo Talvela) died containing the Soviet Motti at Karhumäki on 6.12.1941.

My grandmother’s  cousin Major Pauli Kontio died while reading a bible on a tree stump in 1942 near Kollaa. He had originally meant to study to become a priest, but had seen a Russian Cossack harassing a Finnish lady in Turku in 1915 and decided to pursue a military career instead.

Whilst researching the Continuation and Lapland Wars did you come across anything particularly interesting that did not make it into the final book?

There was a lot more detail on the politics of the war, especially from the many revelations of Paavo Talvela's diaries. Another book we may be interested in exploring in the future are the stories of the Mannerheim Knights, each of whom did something uniquely heroic to earn that rarest of awards. In Finnish their stories are well known, but for foreign readers most of their tales are like straight out of Hollywood.

What was the biggest challenge in writing this book?

To try to decide what the readers would find interesting and what to leave out, especially as the further we delved into a matter the more excited it made us.

In the introduction to Finland at War: The Continuation and Lapland Wars you mention difficulties with the recently opened archives of the former Soviet Union. How did you approach these sources as an historian?

The recently opened archives certainly made things easier. It made it at least possible to find some materials, and I believe over the next decade  we will see some extremely exciting military history from Russia's point of view should objective critical writing be allowed under Putin. The bigger challenge were the clearly eradicated records (especially for Winter War), or records that had been clearly later doctored. In these cases, we tried to evaluate what really could have happened, and often relied on Western sources as more reliable sources.

The period covered by Finland at War: The Continuation and Lapland Wars sees Finland fighting alongside Germany against the Soviets and then alongside the Red Army against Nazi Germany. How has this affected the way in which the Second World War is viewed in Finnish history?

Finns still generally view Germany as an ally and what happened to bring us to oppose each other as unfortunate. This view won't be shared as strongly in Lapland which was largely burned down. Many of the officers of the wars, who later turned to business, continue to uphold their good relationship with Germany. The hatred against the Soviets continued to run deep with the older generations, having seen the devastation of the wars and lost so much. Some refused to let go of these grudges, such as the Karelian population who were driven out following the conflict. To date, military exercises are aimed at defence against Russia which remains as the only likely threat to Finland's Independence.

Vesa Nenye authored Finland at War: The Continuation and Lapland Wars 1941-45 along with Peter Munter, Toni Wirtanen and Chris Banks. Click here to purchase a copy.