The second plate categories in a New Vanguard are the battlescenes or ‘technicals’. They are really one type of plate, although the focus of each is different. A battlescene is … well … a battle. A technical is an illustration of some aspect of operating the item highlighted in the New Vanguard. Loading the bombs into a bomb bay is a technical.  Dropping the bombs over the target is a battlescene. Regardless, I approach both the same way. 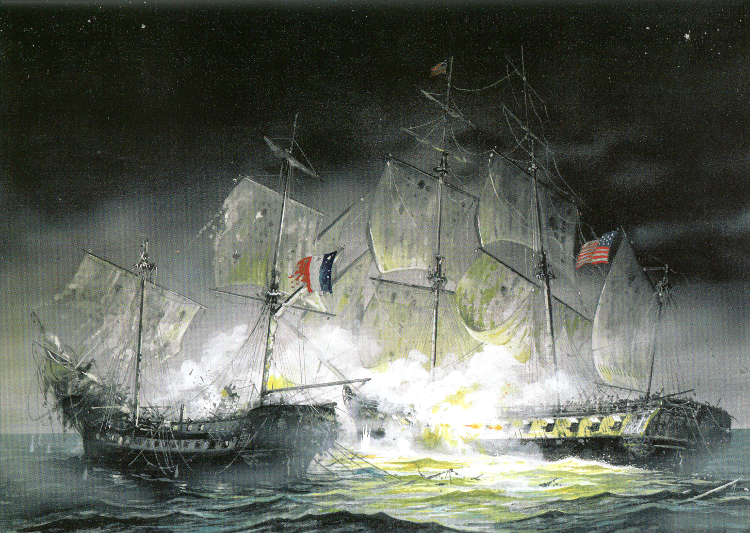 Constellation vs L'Venguer – the battle no one illustrates

In Great Lakes Warships one of my battlescenes involved the frequently-illustrated Battle of Lake Champlain. My different take was to show Saratoga as it rotated 150 degrees to bring its undamaged broadside to bear on the British. No one had ever shown that before. Part of the fun (for me) was figuring out how it was done. Any reader of C. S. Forester or Patrick O’Brian has read about anchoring on springs. I got to figure out how it was done and how it worked so I could instruct the artist on what it looked like. Neat stuff!

Seaplane carrier battle scenes can be a bit tricky. They were not supposed to mix it up with surface warships, and there were no WWI exchanges of airstrikes as was so common in in WWII.  One battle plate ended up showing aircraft launching for an airstrike. I could have used one of several strikes, including the start of the Cuxhaven Raid. An even better one was the Wakamiya’s attack on Tsingtao. It was the first-ever carrier airstrike. Plus, while the Cuxhaven Raid had been illustrated several times (in photos and artwork), even getting an illustration of the Wakamiya was a challenge. So, let’s put the Japanese in a plate. I showed the start of the strike: a Maurice Farman taking off with Wakamiya in the background. 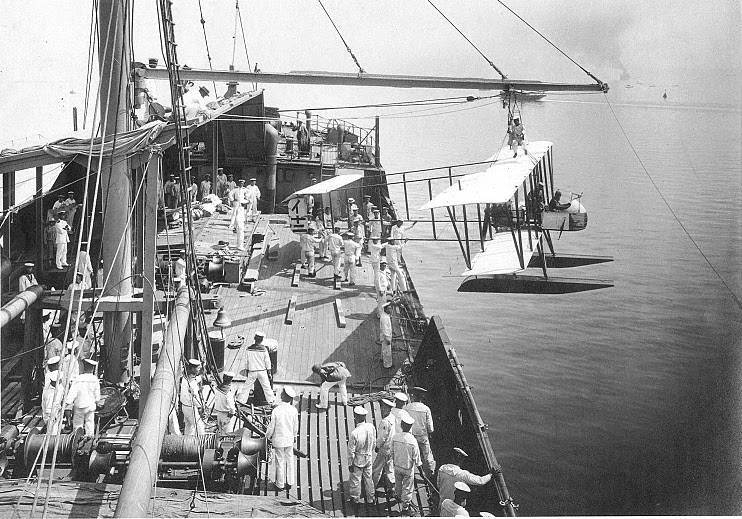 A Maurice Farman being lifted off Wakamiya

The other battlescene was a little more kinetic – for the seaplane carrier. HMS Ben-My-Chree was sunk by artillery on the Turkish mainland while anchored in a Greek harbor on an island off the coast of Anatolia. So how did I put together the scene?

I was fortunate to find a picture of Ben-My-Chree being shelled, and another one of the ship on the bottom. They were not publication quality, but were good enough for an artist’s brief. I also had plan drawings of Ben-my-Chree, overhead and side.

Good enough? Nope. If this had been on the open ocean I could have gotten away with it, but this took place in a harbor. I needed to depict the land around the battle scene, which was clearly visible in the photos. I needed a map of the harbor.

Three cheers for the Internet. In 1915 I would have needed to find a hydrographic map of Kastellorizo harbor. Today I can go to Google Earth. Sure enough, I found the harbor – and the area around it – and took a screenshot of the area. 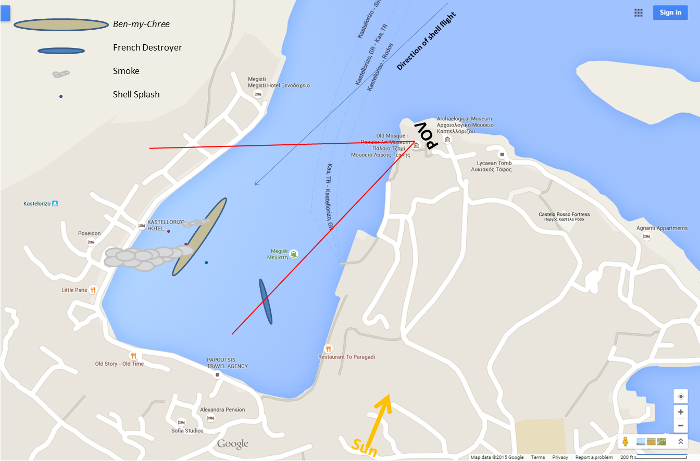 Better still, an Internet search uncovered pictures of Kastellorizo from 1922 and the present.  The 1922 photo was black and white and poor quality. The 21st-century photos were from photo sharing sites – vacation pictures. They showed the city was not much altered from 1917, when the battle was fought. I could use the modern pictures to show the artist what the town looked like – in color!

I think it should make a visually effective plate. The gray warships and grimy smoke will make a striking contrast to the cheerful colors of the town. It is the type of thing you live for as a Osprey author.