On 6 July 1917 Lawrence of Arabia captured the port town of Aqaba in perhaps one of the greatest coups of the Arab Revolt. He had left the Arab camp at Wejh on 9 May, embarking on an epic expedition across some of the worst desert terrain in Arabia. As they approached Aqaba their ranks swelled with friendly tribesmen, numbering over 1,000 men when they finally took the town.

The extract and illustration below are taken from Campaign 202: The Arab Revolt 1916-18 by David Murphy. The artwork is by Peter Dennis. 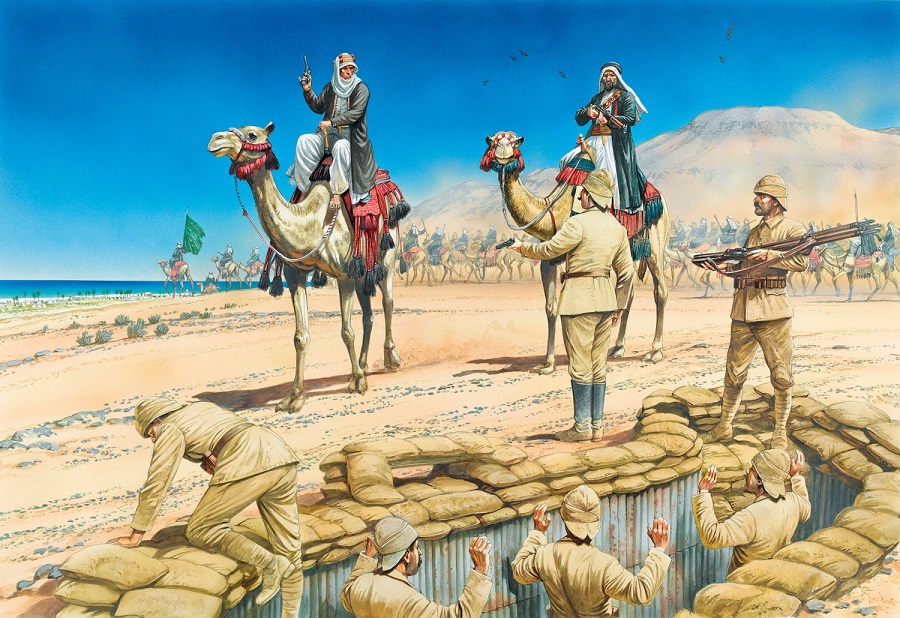 In the summer of 1917, T. E. Lawrence and the Arab leaders recognized the importance of seizing the port of Aqaba in order to secure a port and base on the northern Red Sea coast that could in turn facilitate further campaigns into Palestine and Syria. Accompanied by a party of tribesmen and Auda abu Tayi, the hereditary war chief of the warlike Howeitat tribe, Lawrence led a small force on an epic two-month march through the desert. After a clash with a Turkish battalion at Abu al-Lissan, the Arab force took the surrender of some of the outlying garrisons and finally took Aqaba on 6 July 1917. The taking of Aqaba represented a huge turning point in the orientation of the campaign and thereafter the Arab Northern Army could use it as a base for later campaigns in support of General Allenby’s push into Palestine in 1917 and 1918. Depicted here is the surrender of the final Turkish garrison at Khadra, outside Aqaba. The port town then became the major base of the Arab Northern Army, which was commanded by the Emir Feisal. In the months that followed, the Arab Northern Army was reinforced and resupplied by sea and in later campaigns it included an armoured car detachment and mobile artillery battery while the RFC/RAF provided further support. In the campaigns of 1918 this Arab force represented a considerable threat to the Turkish left flank while attacks on the railway continued along the length of the Hejaz Railway, further draining Turkish resources. All this was made possible by Lawrence’s daring expedition to Aqaba in 1917. The Aqaba raid became a model for later long-range desert operations and during World War II inspired the leaders of units such as the LRDG and the SAS to carry out similar raids during the North Africa campaign.

The battle inspired this incredible (although heavily fictionalised) scene from the 1962 film Lawrence of Arabia. A little trivia tidbit for you - Peter O'Toole and Omar Sharif were so nervous about falling off their camels that they got blind drunk and strapped themselves onto their mounts.