This description of the landings on Guadalcanal comes from Campaign 284 - Guadalcanal 1942-43, which is currently available to preorder and will be released later this month.

The landing on Guadalcanal on the morning of August 7 came as a complete surprise to the Japanese. Intelligence on the numbers and disposition of Japanese forces on the island was spotty. The best estimate was that there were 5,000 Japanese on Guadalcanal, including an infantry regiment with 2,100 men. In fact, there were only 3,700 Japanese personnel on Guadalcanal, Tulagi and Gavutu-Tanambogo, and of these only some 650 were fighting troops.

The Japanese garrison on Guadalcanal was centered on the new airfield just inland from Lunga Point. These men were awakened at 0614hrs by the sound of American naval gunfire. Since there were no Japanese beach defenses, and because there were only some 250 fighting troops on the island to oppose the Marines, the Marine landing went smoothly. The transport ships reached their designated positions offshore just before 0700hrs in preparation for the landings at 0910hrs. The site chosen for the landings was a beach 6,000 yards from Lunga Point. The beachhead would be seized by Combat Group A (5th Marines) and then Combat Group B (1st Marines) would move to the southwest to take the high ground. 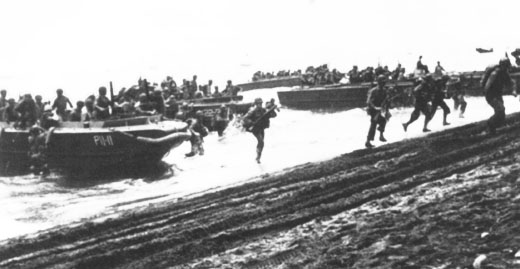 U.S. Marines debark from LCP(L)s onto Guadalcanal on 7 August 1942.
Licensed under Public Domain

The two battalions of the 5th Marines had no problem establishing the beachhead since there was no opposition. As planned, the 1st Marines passed through them to take the “grassy knoll” to the southwest. In fact, this was Mount Austen some eight miles (13km) away. It was soon apparent that this objective would not be taken on the first day, and in general the advance was slowed by rough terrain and the Tenaru River located to the west of the beachhead.

While no Japanese were encountered on the ground, a Japanese air response was not long in coming. The IJN dispatched 53 aircraft from Rabaul to attack the concentration of American shipping located off Guadalcanal. Beginning at 1315hrs, a brief but intense air battle began. The Japanese were able to score only a single hit on a destroyer in exchange for 16 aircraft lost. The only impact on the Marines was a three-and-a-half-hour delay in unloading the ships offshore. In spite of this delay, the beach was flooded with supplies that quickly impeded the ability of the beach party to cope. The situation became so chaotic that unloading was suspended at 0242hrs the next morning.

At the end of the first day, Vandegrift had all five of his infantry battalions ashore. The 1st Marines made only one mile inland before stopping for the night to dig in. The 1st Battalion, 5th Marines reached Alligator Creek some two miles west of the beachhead and dug in there. The eastern flank was covered by 3rd Battalion, 5th Marines.