On 13 August 1704 John Churchill, Duke of Marlborough faced a Franco-Bavarian army at Blenheim. He emerged victorious from the hard-fought battle, arguably one of the greatest victories ever won by a British commander.

The illustration below, taken from Campaign 141: Blenheim 1704, depicts the First Foot Guards crossing the Nebel Stream to attack the enemy. 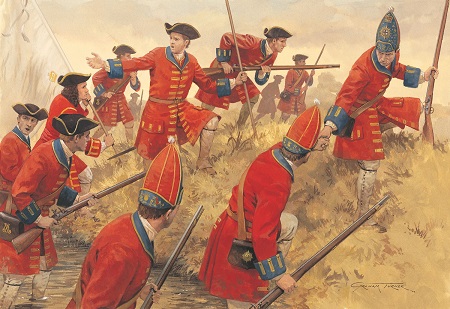 Grenadiers and musketeers of the First Foot Guards struggle to clamber up the marshy banks of the Nebel stream as they move forward to launch the first attack on the village of Blenheim and its surrounding defences. The Guards launched their assault against the barricades that linked the village on the banks of the Danube. The defences were held by dismounted French dragoons and bitter fighting continued until the end of the day. By the time of Belnheim the Grenadier was seen as an elite soldier rather than as a specialist armed with explosive bombs. Grenades still had an important part to play in siege warfare but they were not used in open battle. The Grenadier cap is often said to have been adopted to allow the Grenadier to throw his grenade without knocking his tri-corn hat off his head. Unfortunately for the veracity of this story, contemporary Grenadiers threw their grenades underarm...

For more information on the battle of Blenheim take a look at John Tincey's Campaign 141: Blenheim 1704, with illustrations by Graham Turner.