To mark the occasion we've decided to give you an illustrated history of Ottoman armies throughout the ages. 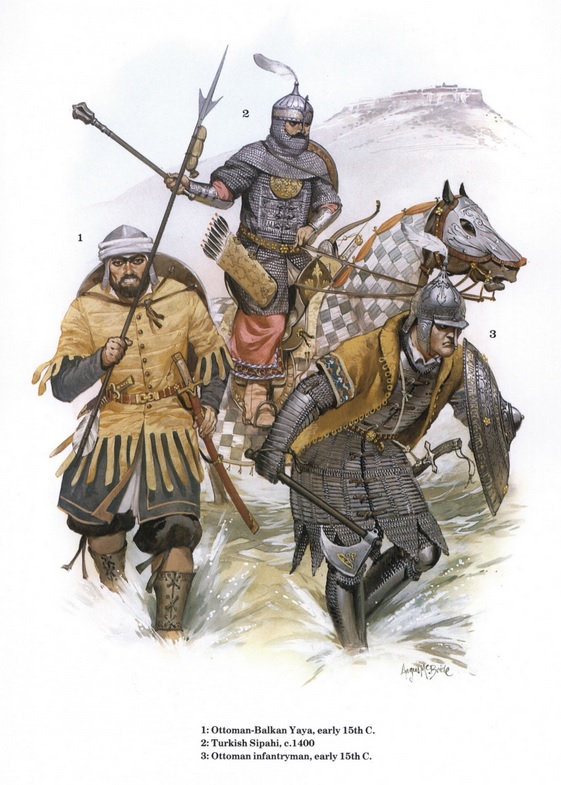 Many Ottoman infantrymen were of Christian origin and this seems to have been reflected in their equipment. This man wears an Italian-style reinforced 'jacket' over eastern dress. His feathered javelin with its bag of incendiary material was used against siege-engines, ships, wooden defences or simply to terrify the foe.

Feudal cavalry were the backbone of medieval Ottoman armies. This man wears a 'turban' helmet and wields the mace favoured by many Muslim warriors. The opening of his highly decorated mail-and-plate armour is protected by an additional chest-covering medallion, and his horse's lamellar bard has a cloth covering.

This man is clearly one of the Sultan's élite. He wears full infantry armour of mail-and-splints, probably designed for siege-warfare. Even his engraved iron shield could resist primitive firearms. His sword is slung from his shoulder, a style only used by foot soldiers. 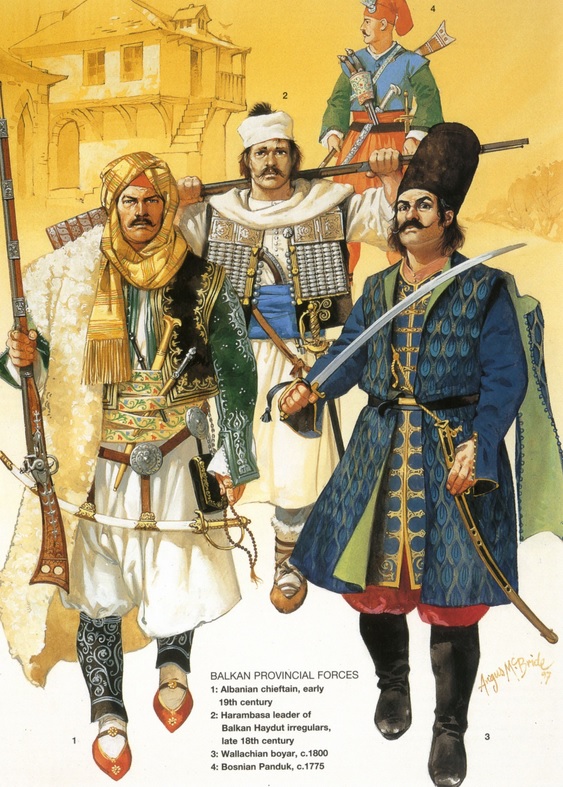 During the early 19th century the exotic Balkan costumes caught the imagination of western European artists and writers. None were more magnificent than those of the Albanians. The appearance and indeed the weaponry of the élite were highly decorated, and the Muslims generally carried more weaponry than the Christians. In fact non-Muslims were theoretically barred from bearing arms at all

Muslim and Christian Haydut or Haiduks living in the hills preyed on the towns and villages below, but also provided local powers with many of their best troops. The man shown here is a Christian bandit. He wears a Toke jacket decorated with embossed silver plates and embroidery, a feature of Haydut leaders. His pistol is a Balkan weapon, his enormous musket Turkish, while his sword has been taken from an Austrian infantry officer.

The indigenous Boyar aristocracy of Wallachia and Moldavia were described as wearing Ottoman Turkish costume except for tall lambskin Kalpak hats instead of turbans. This hat was itself of steppe origin from north of the Black Sea. The Boyars also dominated the Principalities and many of them maintained close links with the neighbouring Russian Empire. In fact this Wallachian carries a Russian cavalry sabre.

Unlike Haydut bandits, the Panduks or Pàndurs were largely recruited from ex-soldiers. Many had experience in Austro-Hungarian or Russian ranks while others were ex-Ottoman regulars. This man’s hat suggests that he had been a member of the Turkish Bostancis. In it he has a jewelled çelenk awarded for outstanding courage. In addition to his Balkan Yatağan, pistols and decorated musket, he is armed with an Italian straight-sword purchased on the Adriatic coast. 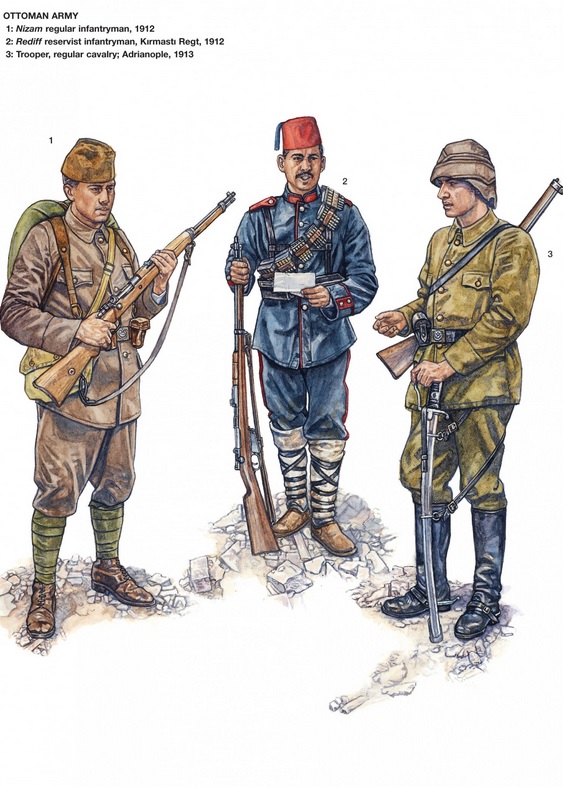 This Ottoman regular army soldier is wearing the M1909 uniform made of brown-khaki wool. In 1912 some Ottoman soldiers wore this khaki-coloured soft hat instead of the old pre-1909 red fez, but it was not in service for long, and was soon to be replaced with the familiar enver hat of 1914–18. Privates in the infantry had no tunic shoulder straps or collar patches. This soldier is in full marching order, with a knapsack and haversack in addition to his brown leather belt with ammunition pouches. The star-and-crescent device on his belt buckle was a common feature on most Ottoman uniforms of the period. His rifle is the 7.65mm Mauser M1903, the most modern of several Mauser models then in service with the Ottoman Army.

This local reservist infantryman is part of the defence force manning the Chataldzha defensive lines on the road to Constantinople. As a rediff soldier he has been issued with an old and well-worn M1893 dark blue tunic, with the red trim of the infantry. He wears the old-pattern red felt fez with blue tassel, which had been emblematic of the Ottoman soldier for generations. The 1893 pattern trousers have red piping down the outseam, and are worn with wrapped woollen leggings secured by leather straps. Shoes were in short supply; this reservist has acquired a pair of comfortable locally-made peasant shoes. His regulation equipment is the leather belt and pouches, but he has also been issued with a bandolier carrying extra ammunition for his Mauser M1890 – a model still in widespread service in 1912.

This Ottoman regular cavalryman is part of a detachment which rode into Adrianople during the Second Balkan War under the command of Maj Mustafa Kemal (better known by his title of Attaturk, adopted when he became the founder and leader of the modern Turkish state in the 1920s). The trooper is wearing the M1909 khaki uniform with cavalry boots, and a headgear first seen during the 1912–13 campaign. This kabalak was described as being improvised with strips of woollen cloth wound around a wicker frame. From photographic evidence it appears that it was often quite poorly constructed and presented an untidy appearance, with strips of cloth hanging loosely down. The trooper’s equipment is basic: a belt supporting an enlisted-ranks’ sabre and a single ammunition pouch. His carbine is the standard cavalry-issue 7.65mm Mauser M1905. 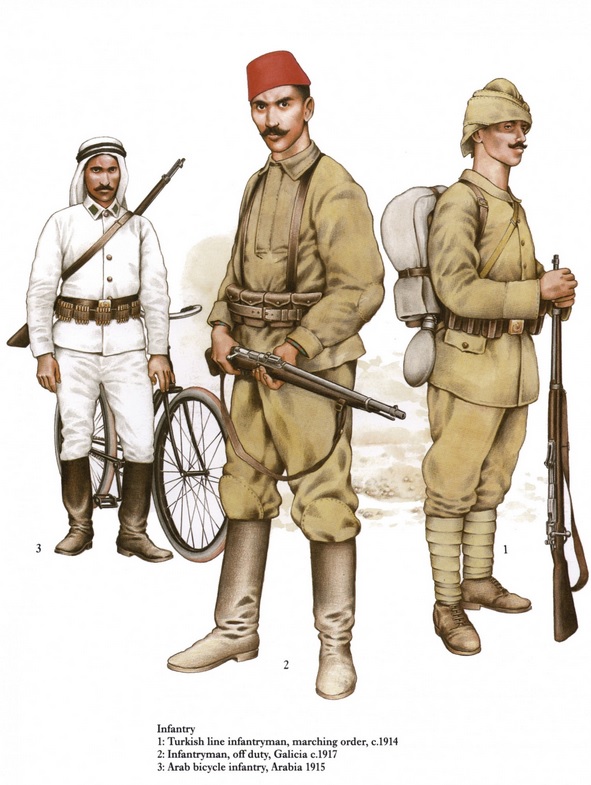 The ordinary Turkish infantryman of 1914 was well equipped and well dressed. Only when large numbers of reserves were called up did the standard of uniforms deteriorate. This man carries full marching equipment, as he might have appeared at the start of the Great War. While his simple but practical uniform is purely Turkish, the rest of his equipment is German in style. He is armed with a 'Turkish' (meaning made specifically for the Ottoman Turkish Army) Mauser rifle M.1893. By 1918 a variety of different rifles were also in use.

This man has been almost entirely re-equipped by the Austrians or Germans and has been issued with a captured Russian Mossin-Nagant M.1891 rifle. His tunic is one of several much cruder patterns introduced during the course of the war. Note the strengthening patches added on the knees and elbows. Towards the end of the war a variety of different, and perhaps locally made, cartridge belts were also in use. Surviving photographs show that the old-fashioned soft red fez, supposedly phased out before the Great War started, was sometimes still worn when men were off duty.

At the start of the First World War a large proportion of the Ottoman Armies in Syria and Iraq were recruited from the local Arab populations. They fought with distinction at Gallipoli but many later joined the Arab Revolt and fought as allies of the British. Others remained loyal to the Ottoman Empire until the end of the war. Most were uniformed and equipped in the same way as Turkish infantry, except that they wore the Arab kufiya headcloth and 'aqal camel hair ring instead of the Turkish kabalak hat. But some wore white uniforms like this man stationed in the Muslim Holy City of Medina. He is armed with the German M.1888 rifle. There were supposed to be four cyclists in each infantry battalion at the start of the war; but the only other complete bicycle-mounted unit in the Ottoman Army was an infantry company far away at Edirne near the Bulgarian border.

We have a wide range of books relating to the Ottoman Empire. Here are a selection of them to get you started!