Our destination today is Russia, with the selected piece of artwork coming from Campaign 148: Operation Barbarossa 1941 (2). The scene below shows a German vehicle speeding along the road towards the bridges as Russian troops scramble into positions from which they can fire upon it. 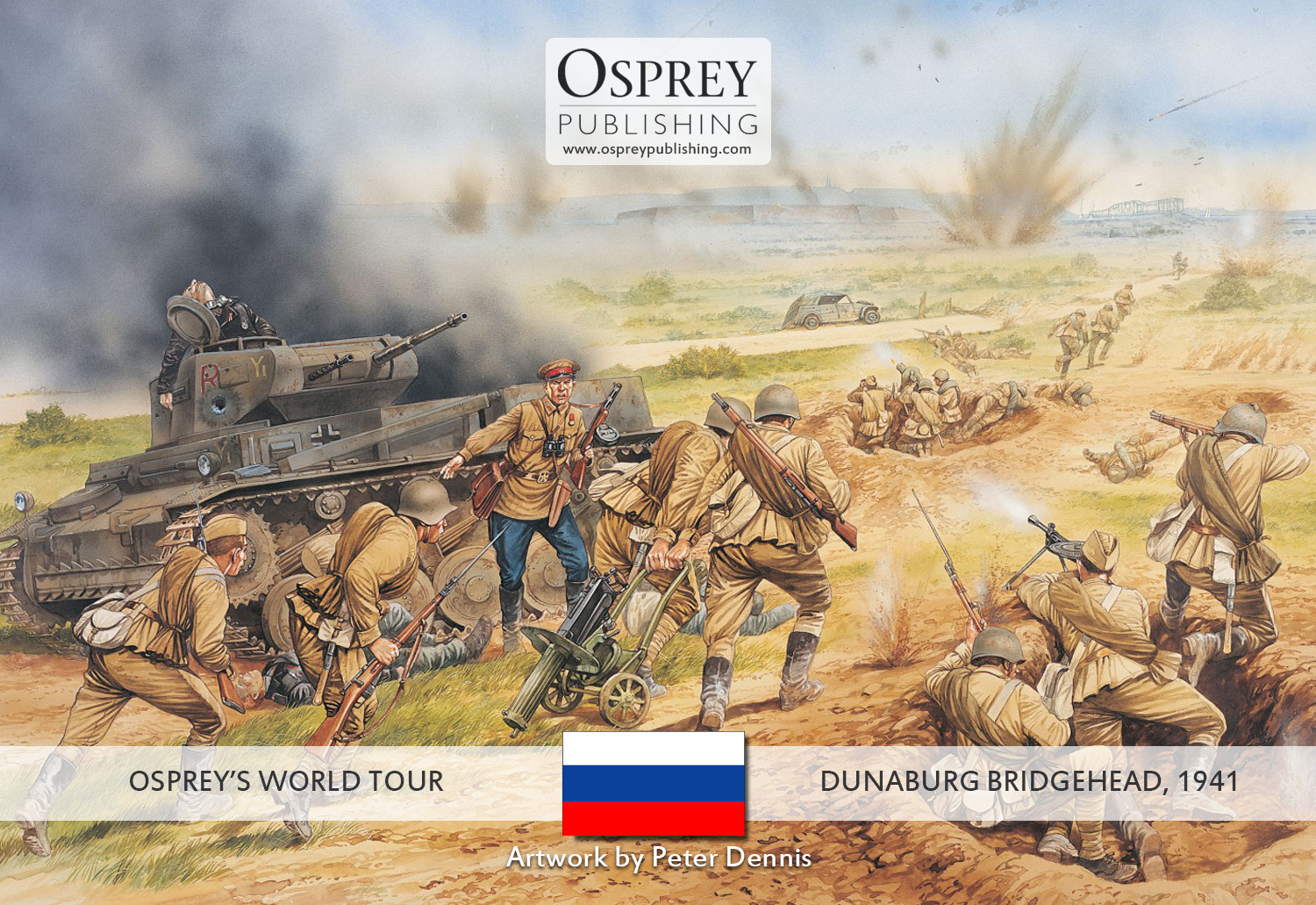 The Germans considered the Dvina–Dnepr River line the Red Army’s last, best hope at halting Barbarossa early. If their panzers could rush the rivers and establish bridgeheads on the far bank they believed they could unhinge the Soviets’ defenses and prevent an 1812-style withdrawal. In Army Group North’s area the Dvina bridges at Dünaburg stood tantalizingly close to the Nazi–Soviet frontier. General Hoepner calculated that his panzers could conduct such a daring “panzer raid.” With speed and flexibility in mind his Panzer Group Four was not subordinated to an infantry army. General von Manstein’s LVI Panzer Corps had the mission of Schwerpunkt for this raid.

For their part the Soviets were not prepared for the coming onslaught. They assumed German forces in East Prussia and the Government General would make generally for Moscow. General Kuznetsov’s Northwest Front initially did not have sufficient forces to hold Field Marshal von Leeb. Kuznetsov’s weak leadership compounded this problem as it withdrew from the border: his 8th Army pulled back due north and the 11th Army retreated toward the east with the Western Front. These moves, made without a firm hand from above, opened the road to Dünaburg to von Manstein’s men.

On the morning of Barbarossa’s fourth day a motorized infantry task force plus a company of Brandenburg commandos sped past Soviets too stunned to react. Red Army soldiers guarding the bridges failed to halt the Germans, could not respond effectively, and the Germans held Dünaburg’s three bridges after a matter of minutes. Teutonic Knights founded Dünaburg in 1278, but the massive seventeenth-century brick fortress faced toward invaders from Germany. It was from this direction that Kuznetsov’s escaping men came.

First von Manstein’s 8th Panzer then the 3rd Motorized Divisions occupied Dünaburg and now held the bridgehead. Soviet soldiers from the 21st Mechanized and 5th Airborne Corps trickled north to escape the pursuing Germans, not realizing the LVI Panzer Corps barred the way. Soon elements of the 27th Army’s 16th Rifle Corps, belatedly sent to fill the Dünaburg gap, were trapped as well. Overhead the 8th Mixed and 61st Fighter Brigades sought to destroy the bridges and help their comrades on the ground. Bf 109s of JG 53 Pik As and JG 54 Gruenherz created a holocaust of Red Air Force aircraft, shooting down 74 planes in one day. Members of 8th Panzer established a hasty defense as desperate Soviets pressed against them. German heavy weapons from the fortress fired down in support.

Soviets picked their way forward, in this case with a Maxim 1911 machine gun, trying to fight their way to the bridge and hopefully, re-establish a valid defense of their homeland. Here a Panzer Mark II has been destroyed by a shot to the turret. The battlefield is littered with death and destruction and the sky is criss-crossed with the smoke of falling Soviet airplanes. Unfortunately for the Red Army men their efforts were too disjointed and the Germans too well entrenched. Although many made it across the river, they did not reinstate a legitimate defense. However, neither could von Leeb exploit the brightest spot in Barbarossa’s opening few days; he thought and acted too slowly to exploit von Manstein’s gains.

Eager for more? Take a look at the list below - just a small selection of what we have available for Russian military enthusiasts!

What do you think is the most interesting element of Russian military history? Is there something we are missing? Let us know in the comments below.