Today Osprey's World Tour has taken us to Ireland, with a stunning piece of artwork offering a glimpse into the nation's military history. The scene below is taken from Campaign 180: Easter Rising 1916 and shows the occupation of the General Post Office on Sackville Street. 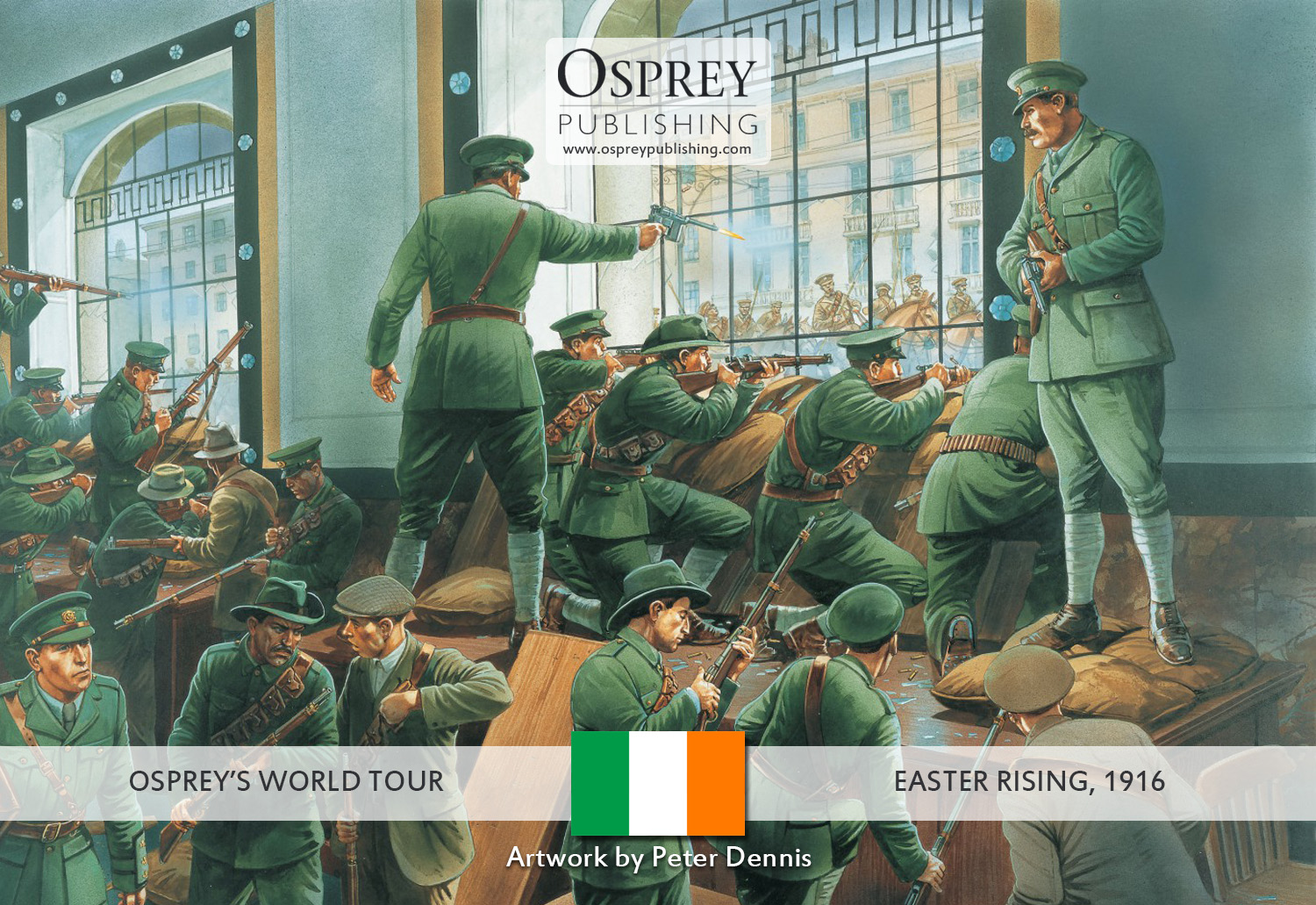 Almost as soon as they had occupied the General Post Office, the Rebels began to fortify the building using whatever materials came to hand – furniture, postal sacks, ledgers – any thing that would serve to block a window or provide a modicum of cover. As news of the Rising spread, a detachment of the 6th Reserve Cavalry Regiment, under Col. Hammond, was sent from the Marlborough Barracks, near Phoenix Park, to investigate and report upon the situation in Sackville Street.

Unsure of the situation, Hammond halted his command at the Parnell Memorial at the northern end of Sackville Street, and sent forward a small patrol to secure the information required. As the troopers passed the Nelson Pillar, many of the insurgents within the Post Office abandoned their attempts at building breastworks and armed with an eclectic mix of firearms, rushed to the windows to be amongst the first to strike a blow against the enemy. On the ground floor of the GPO, James Connolly, moved amongst the men encouraging them and cautioning them to await the orders to fire, being joined by Capt. Michael Collins, one of Joseph Plunkett's aides, who had come to the front of the building in order to observe and report on developments.As part of a training formation, the cavalrymen included recruits from four units, the 5th and 12th Lancers and two regiments of London Yeomanry. Contrary to many reports only a number of the men were actually armed with lances.

Despite Connolly's exhortations, many of his men – as well as those in the buildings opposite – fired early and the intended crossfire was not as effective as had been hoped with three troopers being killed and a fourth dismounted when his horse was shot from under him. Another British casualty was narrowly averted when a round fired from the positions across from the GPO, splintered the telephone booth in which Lt. Chalmers was being held prisoner. First blood had indeed been struck, but it was a double-edged sword. The British were now painfully aware that Sackville Street was being held in strength by the enemy and, until the situation became clearer, were more inclined to err on the side of caution whilst amongst the GPO garrison – and Connolly especially – there developed a belief that it would only be a matter of time before the British ordered a frontal assault upon the GPO, which would be bloodily repulsed by the defenders. This misconception on Connolly's part persisted throughout the week, only to remain unrealised when the burning building was finally evacuated late on the evening of Friday 28 April, although – ironically – the British had indeed planned to assault the GPO during the Saturday morning, but cancelled their plans when the building was found to be unoccupied.

Interested in delving deeper into Ireland's military history? Here are a few books to get you started!

Let us know what areas of Irish military history you are most interested in by posting in the comments section below.