The destination for today's instalment of Osprey's World Tour is Germany, with a fantastic piece of artwork drawn from Combat 6: Roman Soldier vs Germanic Warrior. It depicts the Germanic warriors holding off the attacking Roman forces, striking them down as they try to climb the hill towards the German defensive line. 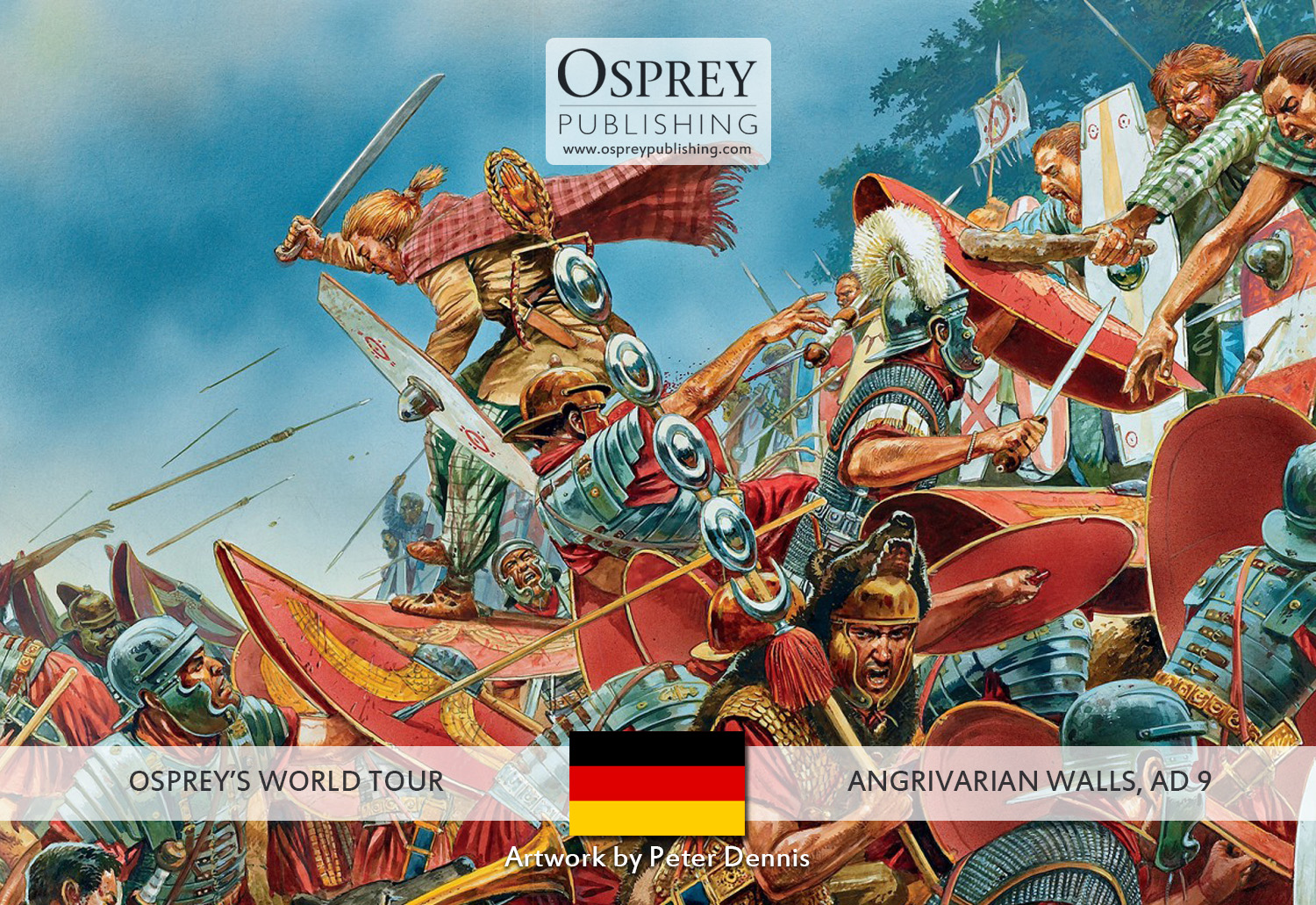 Seen through the eyes of a Roman soldier, a century of legionaries is shown the moment before the unit is ordered to pull back after their assault against the Angrivarian Wall fails. The plan had seemed simple enough. The legions positioned on the level ground under legate Lucius Seius Tubero would advance and storm the earthwork (agger) defended by warriors of the Angrivarii nation. The unit depicted here, led by its centurion, had marched up in close order. At his command, when within firing range the soldiers unleashed a volley of pila to clear the way forward or at least to push the enemy back so the legionaries could climb the rampart.

The Romans have seriously underestimated their adversaries. Smarting from their defeat at Idistaviso, the Germans are a motivated force. Standing closely side-by-side with their shields overlapping, the Germanic warriors form a dense wall of wood, iron, flesh and bone and are determined to repel the enemy. The Germans absorbed the opening enfilade. In front of them the massed ranks of legionaries have advanced, but the Romans must first cross a V-shaped ditch running the length of the entrenchment. The Germans’ plan is to repel the army of Germanicus Caesar before it can gain a foothold on their redoubt. Using their higher vantage point the Angrivarii use their long lances to stab at the enemy to keep them away, and swords to cut and clubs to bludgeon anyone who comes in too close.

Under a storm of sharp projectiles and deadly thrusts of Germanic frameae, the trench has become a killing zone. ‘Those who had to assault the earthwork encountered heavy blows from above, as if they were scaling a wall,’ writes Tacitus (Annals 2.20) a century after the event. The heavily equipped Roman infantry – some wearing chain mail shirts, others the newer segmented plate armour – have to hold their shields above their heads for protection, which reduces their forward visibility and makes the ascent harder. Trying to scramble up the steep side of the earthen bank, some of the men have to crawl on their hands and knees as the soil crumbles under their hobnailed boots in places.

Despite repeated attempts by the legionaries to climb up the embankment, the Germanic defence has proved too strong. ‘The legatus saw how unequal this close fighting was,’ writes Tacitus (Annals 2.20); in the next few minutes Tubero will order his men to withdraw.