On 2 October 1941 the main phase of Operation Typhoon began, with the Fourth and Third Panzer armies launching simultaneous attacks on the Soviets. After a positive start the German assault found itself battling against the harsh weather as well as the Russians as they marched towards Moscow.

The illustration below is by Peter Dennis, taken from Campaign 186: Operation Barbarossa 1941 (3). It depicts 137th Infantry Division assault through the Moscow Defenses near Vorovino, November 17, 1941 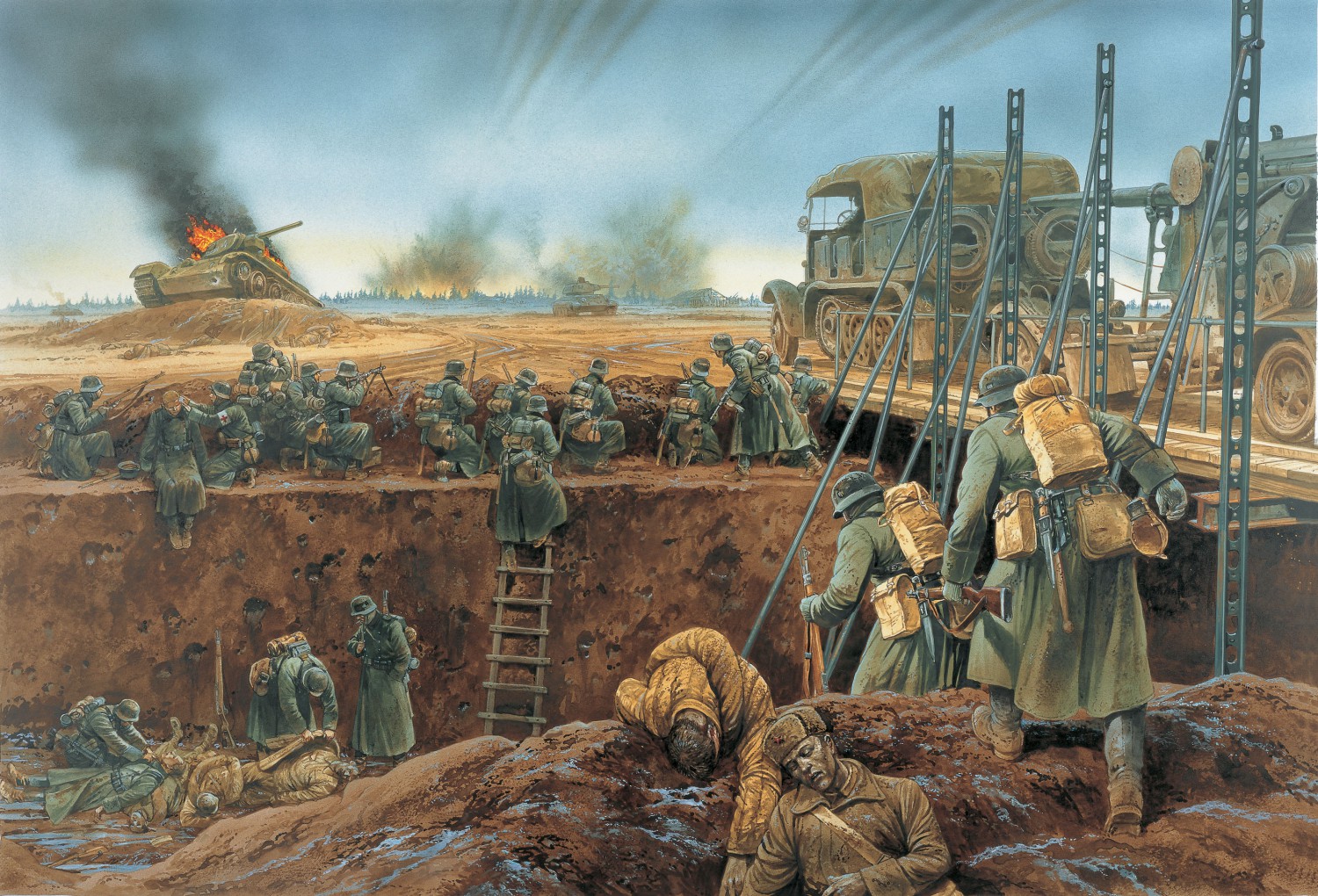 In August and September, Hitler had opted for firming up Barbarossa’s flanks while destroying huge numbers of Red Army forces; Moscow had to wait. In October, Operation Typhoon began with great promise, but then bogged down in the autumn rains and mud – the rasputitsa. The freezing weather of November added new miseries for soldiers of both sides, but at least it allowed continued German forward movement. Barbarossa’s last lunge would have to fight its way through hand-dug fortifications, Stavka’s last thrown-together reserves, and units newly arriving from the Soviet Far East. Despite heavy casualties and sheer exhaustion, neither side showed any sign of letting up. After marching nearly a thousand kilometers, the long-suffering German infantry would find the last hundred to Moscow among the hardest. Hitler, Halder and most of the Reich leadership expected glorious victory to await them in Stalin’s capital; and while the Landser fought for each new village mostly in hope of finding shelter from the next freezing night, the thought of Moscow did exert a powerful attraction. At the far end of a long and poorly-executed logistic tail, they did find some ammunition trickling forward, but in terms of food, fodder and clothing it was often a case of every man for himself. Defending their capital also motivated the Red Army. The massive Kessel battles of summer and autumn had swallowed up two whole waves of armies; the third and last – a combination of militiamen, barely-trained levies and untried troops from the Far East – would fight behind three main lines of defenses, mostly built by Moscow’s civilians under the harsh supervision of the Communist Party and NKVD. Soviet logistic problems eased as the front lines approached Moscow, with reinforcements and equipment going directly from the arriving trains to the front lines in a few hours. This scene shows infantry and engineers of the 137th Infantry Division negotiating the defenses near Voronino almost due south of Moscow, between Maloyaroslavets and Serphukov. The infantry first fought their way across a steep-sided antitank ditch and then through the primitive earthen field works beyond, losing many men to mines and machine-gun fire. The Soviets quickly launched counterattacks, often supported by tanks. Early on November 17, Soviet tanks overran two howitzers; the divisional commander, General Bergmann, asked for reinforcements, in this case 8.8cm Flak 36 guns of Corps Flak Abteilung 707, pulled by their SdKfz prime movers over a tactical bridge erected by the engineers. Overhead, Nebelwerfer rockets pound the Soviet lines.

If you would like to read more about Operation Typhoon then take a look at Campaign 186: Operation Barbarossa 1941 (3) by Robert Kirchubel and Campaign 167: Moscow 1941 by Robert Forczyk.