Having tacitly admitted to not playing with miniatures since my teens I was casually but firmly told by my colleagues that this Would Not Stand. Luckily for them, I took one look at Frostgrave and ran towards it with open arms. I was eager to play, but had neither the time nor the skill to get enough figures together. If only I had some other habit involving debilitatingly costly minis and borderline addiction. 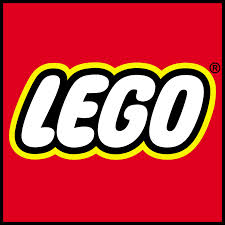 And on that day, Frostbrick was born. 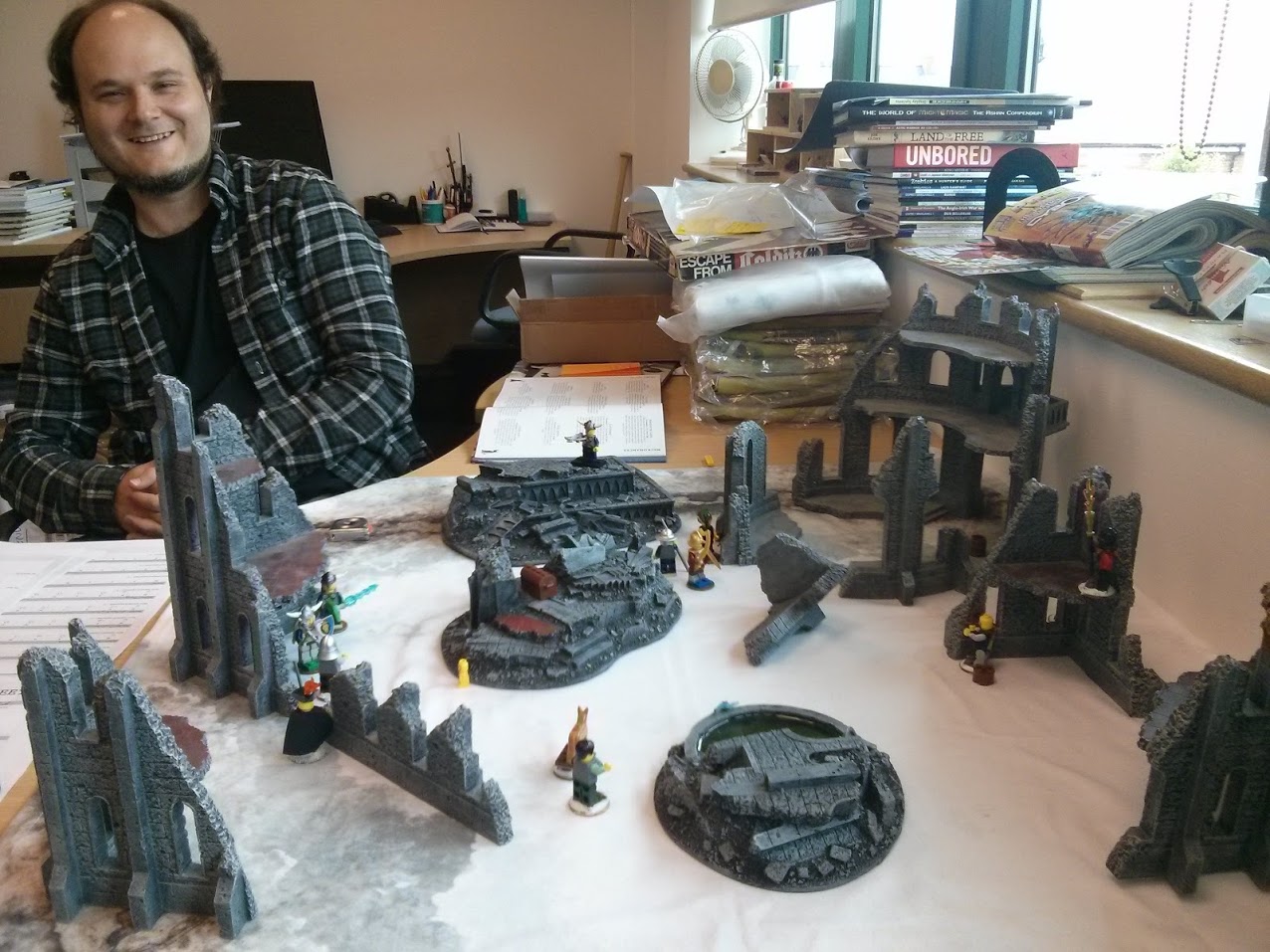 Joe, Frostgrave’s creator, approved of my flights of fancy on the condition that I set two Lego warbands against each other, rather than use mini-figs against miniatures. It didn’t take long to set up two warbands, initially based around the warbands in my short story The Colder Stars, but swiftly modified in favour of fun stuff that was to hand. 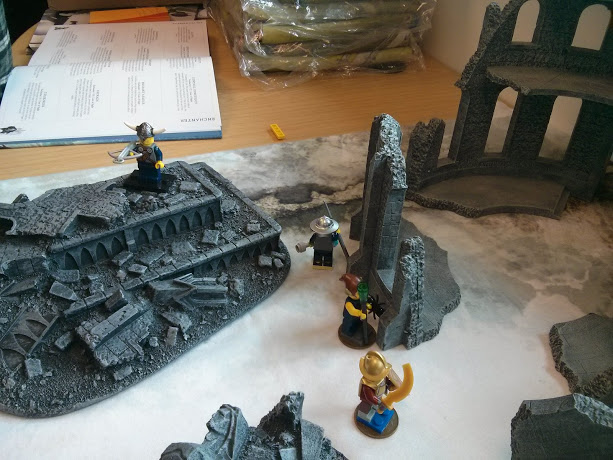 I donated a group to Joe and quickly set my elemental wizard and his ragged crew of bar-room brawlers against Joe’s summoner and his squad of knights. My strategy was a risky one - pick powerful, high-damage spells, and put my wizard on the front lines. My early rolling proved bad enough that I was akin to launching nukes and watching them float off into space, but it made for some tense die-rolls right from the first turn. 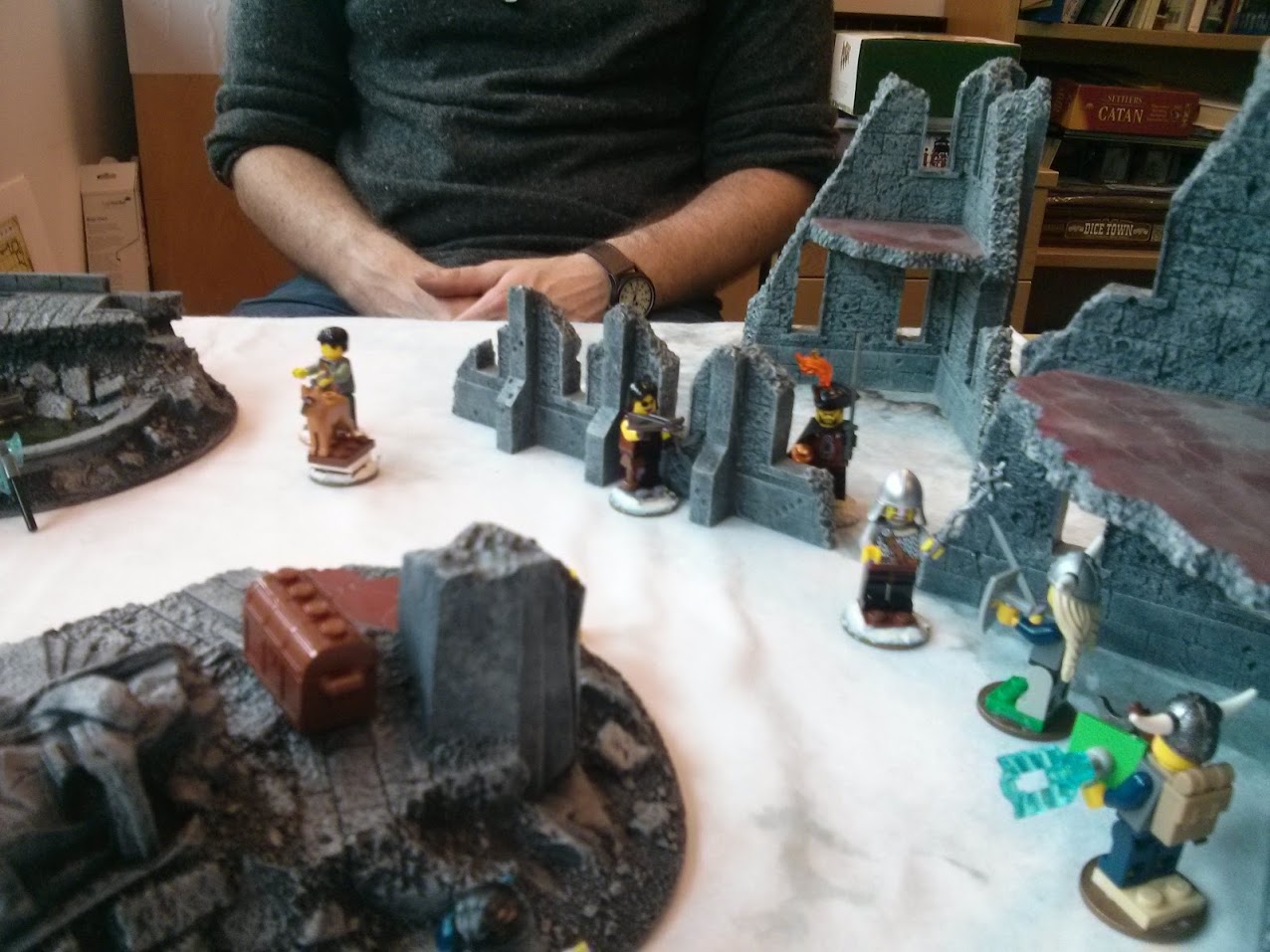 Joe staked an early lead through clever use of his crossbowman, staking out the high ground and forcing me to move very defensively. I foolishly tried to flank him with my crossbow-woman and wizard and ended up dealing with block line-of-sight and a steady stream of summoned imps. 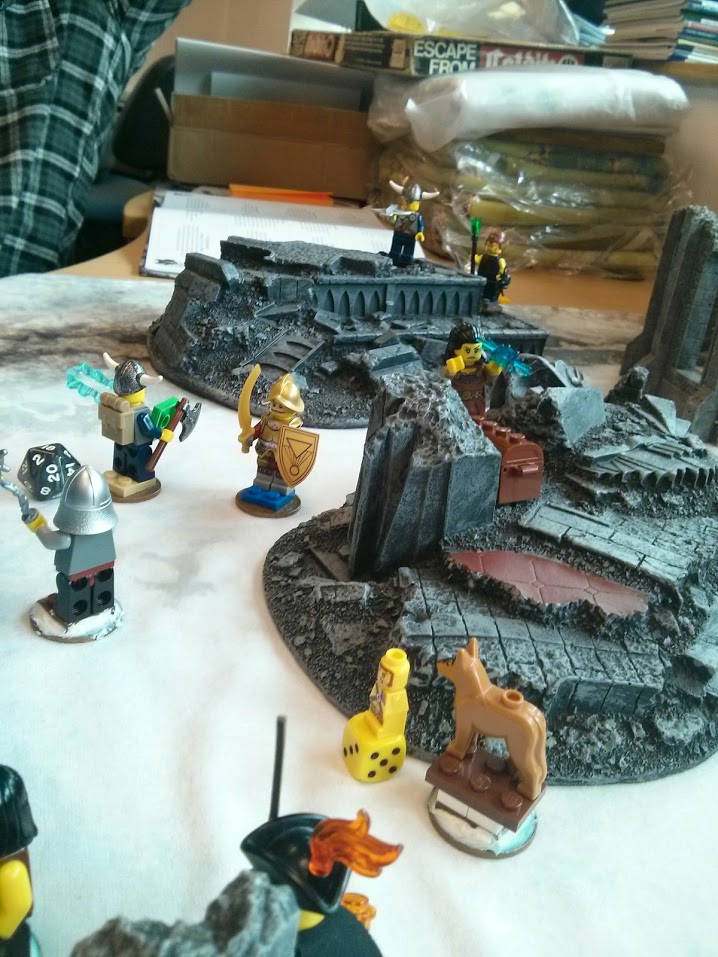 My apprentice had more luck, employing defensive spells to keep my thug safe and letting him steal treasure from under Joe’s nose. I was certainly on the back foot, taking hits left and right, and though I got two early pieces of treasure it left me looking pretty weak. Luckily I could count on Joe’s overconfidence to give me an opening. Gunning for the center of the board he left his apprentice exposed on high ground, where she promptly got taken down by a spell. He has also waded a man-at-arms into a poor position in an effort to take out my wizard, and the imp he intended to blockade me with got into a slow battle of attrition with my war hound. 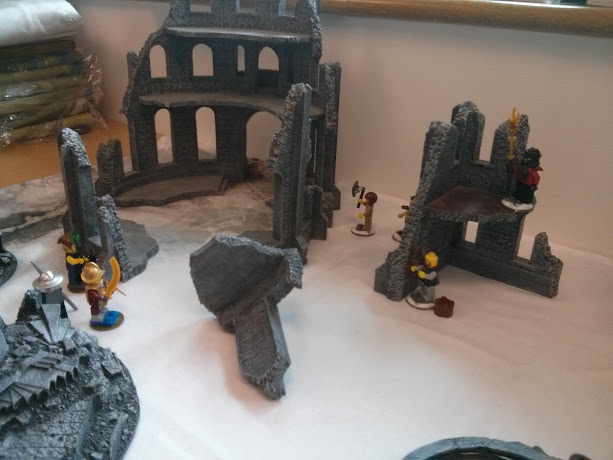 Joe then brought his wizard to bare, taking out my apprentice and joining his crossbowman in a sniping position. My wizard and warhound were bloodied, my crossbow-woman exposed, but my barbarian had had a relatively quiet battle and was ready to be brought into play. I decided to charge Joe’s position with my wizard and Imp-Eater, the newly christened hound, while my Barbarian ran for the treasure his apprentice had dropped. 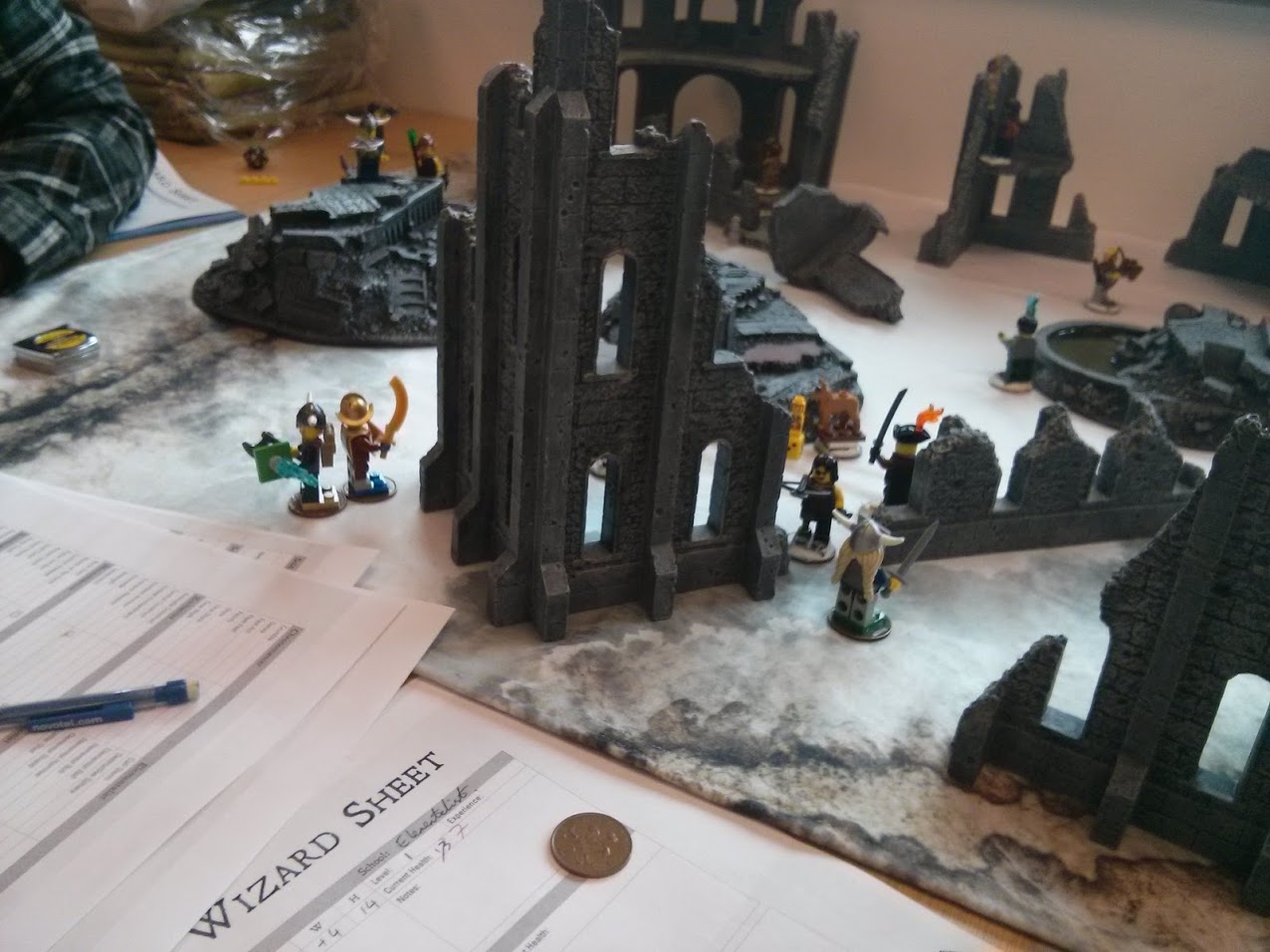 My wizard proved too tempting a target, and while he died quickly he allowed my barbarian to escape, and my crossbow-woman to hammer Joe’s wizard while he was exposed. In the end I managed to steal a win at 4-2, continuing Joe’s losing run at his own game. 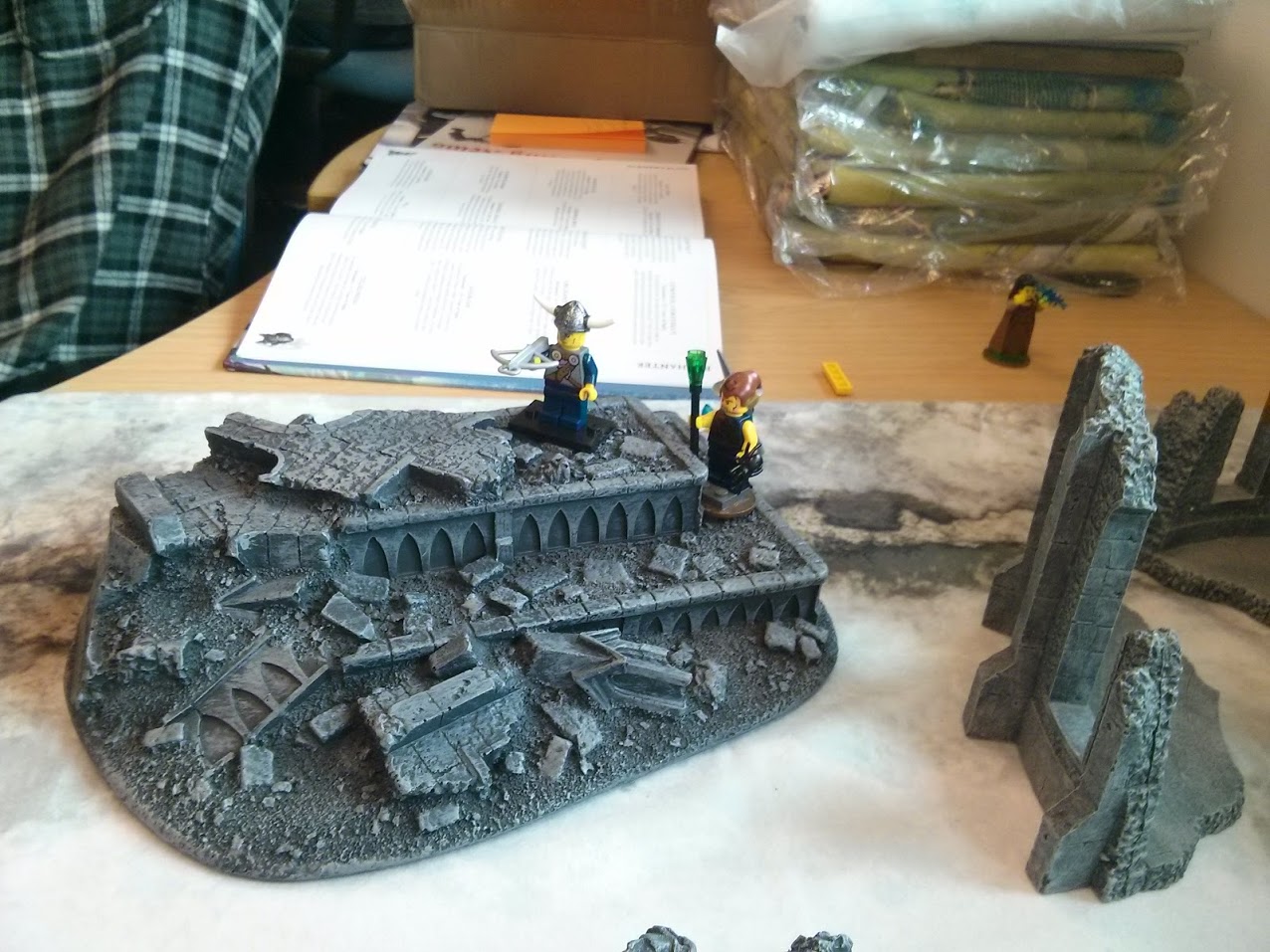 Lego men worked surprisingly well, and scaled perfectly to 25mm bases. We could arm characters accordingly, and actually pick up our treasures as we went. We enjoyed it so much that Phil has now started building his own warband, and Frostbrick (Brickgrave?) looks like it’s going to be an ongoing campaign! It’s not going to get me out of painting minis though... 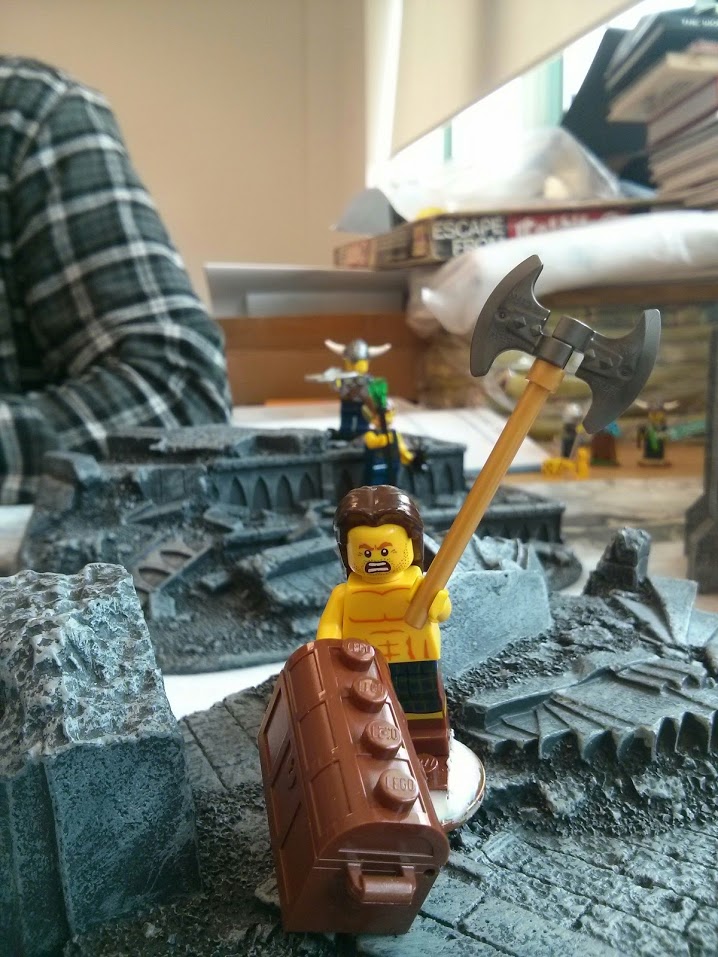