Today marks the 600th anniversary of the Battle of Agincourt. To commemorate this famous battle we have organized a day heaped with history for you. In this second part we join the narrative as the vulnerable and half-beaten French first battle march on towards their English opponents.

The arrow storm forced every man to keep his head down for fear that a shaft might penetrate the eye slits in his helmet. Furthermore the English stood with the low, winter sun behind them – another unnerving and disorientating factor. As the range shortened, there can be no doubt that the English bodkin arrows, designed for the job, began to go through even plate armour protection. When the French arrived at the English line, after three hundred yards of blind, muscle-wrenching foot-slogging, there can have been no impetus left. Perhaps they did push the English back a few yards, represented poetically as a ‘lance’s length’. But many of the French must have been stupefied with exhaustion. And they were so crowded together that even if they had the strength to lift their weapons there was no space in which to aim a blow. 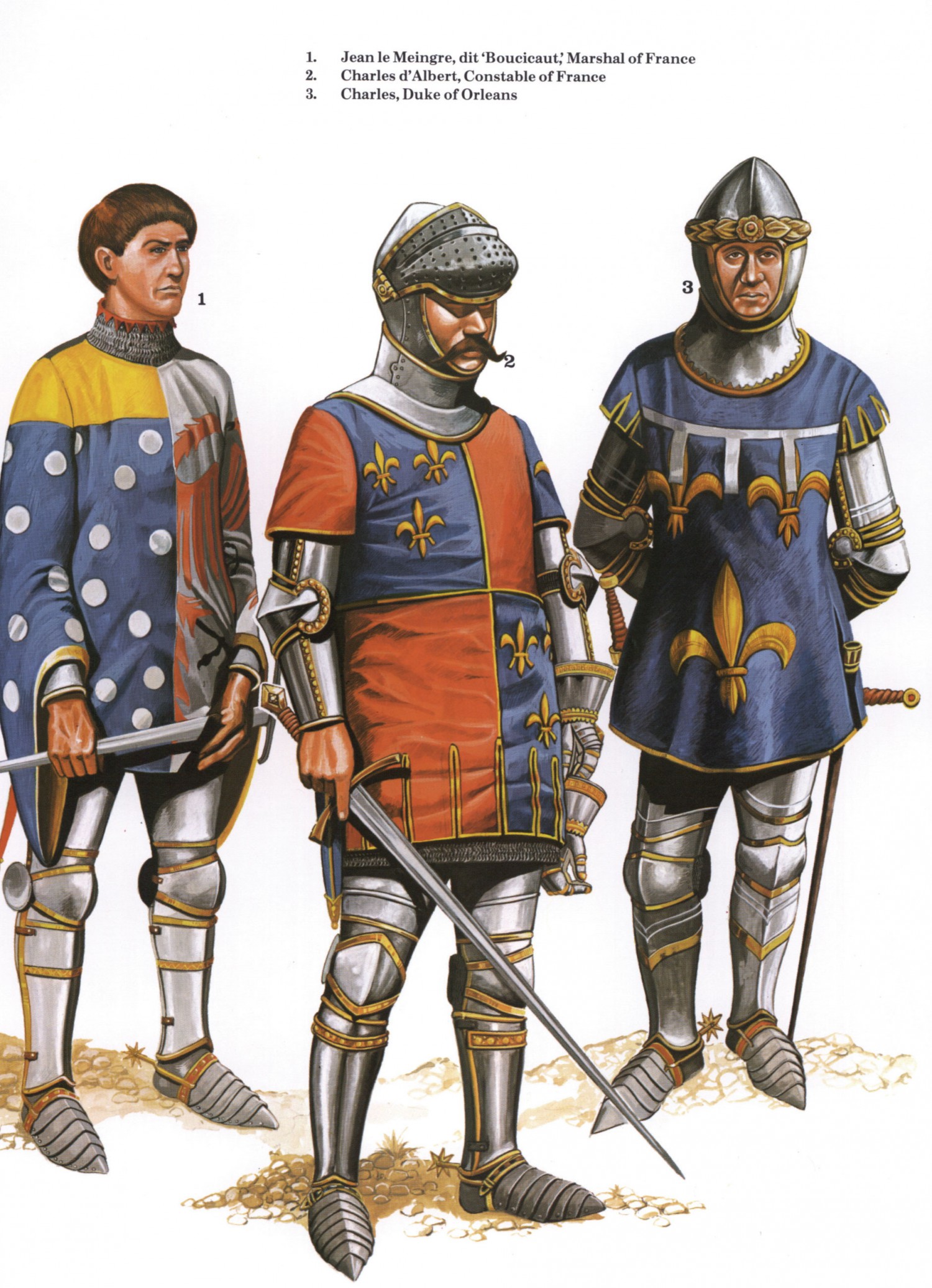 The Marshal of France, Constable of France and Duke of Orleans
Illustration taken from Men-at-Arms 85: Armies of Agincourt by Christopher Rothero

The fighting was nevertheless intense. The English did suffer casualties, the most notable of whom was the Duke of York. He probably was not suffocation under a mound of bodies as is usually claimed, but had his helmet beaten in so that it smashed his skull. The same fate nearly befell the King. All the eighteen squires who had supposedly sworn to fell Henry were killed, but somebody (perhaps one of them or possibly the Duke of Alençon) struck him a blow on the helmet which lopped a fleuret off the gold crown and left it heavily dented. Henry was certainly in the thick of the action. He stood over the badly wounded Early of Oxford and prevented him from being killed by the French. The battle between the men-at-arms seems to have been very close fought. Surprisingly, perhaps, the most effective intervention in the outcome of the fighting seems to have been provided by the lightly-equipped archers. All accounts describe them as throwing down their bows and engaging in the fray. They were equipped with swords, including the chopping falchion, axes and heavy mallets (used for hammering in the stakes and now for beading down the enemy). Their nimbleness, being so lightly clad upon the heavy ground, made them more than a match for the exhausted and bemused men-at-arms who opposed them – men, furthermore, who despised the low-born archers but now fell easy prey to them.

So the seemingly impossible happened. The small English force began to drive the French in front of it, killing, beating down and taking prisoner all who opposed them. Some chronicles speak of piles of dead as high as a man. While there were doubtless many bodies strewn around, some dead, some unconscious, some merely trapped, such a thing is a physical impossibility; but it captures the feeling of a massacre. The first French division was no forced back on to the second. But this strengthening of the French line seems to have had no effect. It merely produced the same results as before. On all sides French men-at-arms, including the most nobly-born amongst them, were giving themselves up. This was a risky business in the heat of battle. Too many Frenchmen seem to have seen the mêlée as a sort of joust between gentlemen, in which it was possible to hand over one’s glove as a symbol of surrender when a duel had been concluded with honour on both sides. The Duke of Alençon lost his life in this way, as doubtless did many others. We are told that after sparring with Henry but finding himself worsted he attempted to give himself up. As he did so, he was struck down by a battle-crazed Englishman, and so died.

The third division, looking on with horror at the defeat of the first two, made no move. Some indeed, being mounted, rode off in flight. Some of the luckier men-at-arms among the first two battles were also helped to their horses by their retainers and so escaped. But all the leaders of the French were killed or fell into English hands.