On 27 October 2014 British forces left Afghanistan, handing Camp Bastion in the Helmand Province over to the Afghan National Army.  It came the day after Britain’s war in Afghanistan came to an end, a 13-year conflict that claimed the lives of 453 British servicemen and women. 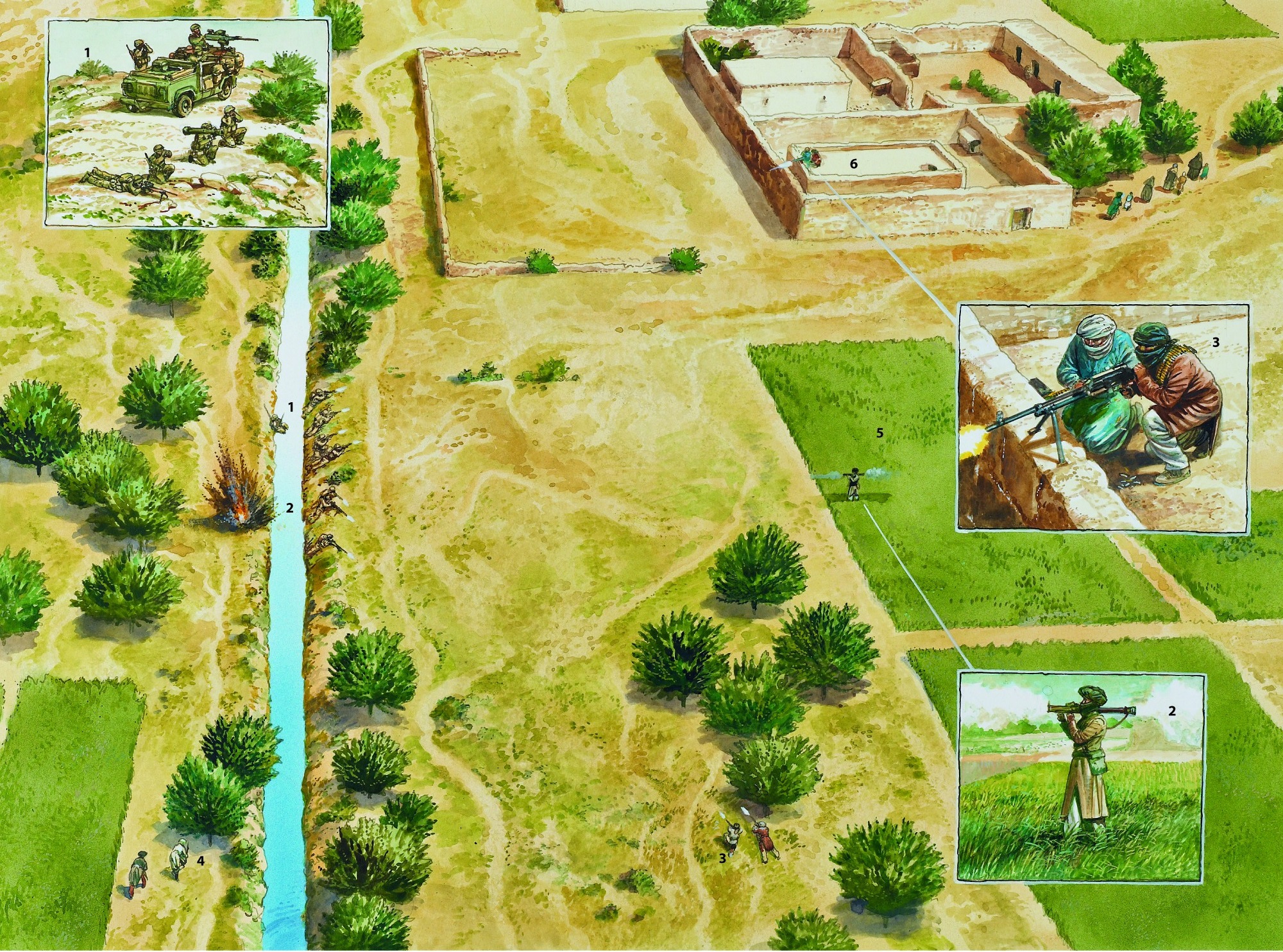 This representative image illustrates a typical ‘TIC’ with the enemy in the Green Zone adjacent to the Helmand River. Distances and scale have been compressed to fit the page; and for clarity, the details have been tidied up into a ‘wargames table’ – in reality the crop-fields would be much less neat, the water much murkier, and the vegetation along the irrigation channel very much thicker.

Typically, a company-level patrol usually consisted of two understrength platoons with their attached FST and FSG, who would venture out of a FOB for a patrol estimated to last 8–12 hours. ‘Dickers’ would inform local insurgents, who would flood into the area on foot using the irrigation ditches, or on motorbikes with their weapons hidden. They would then ‘shoot and scoot’, engaging the patrol from multiple firing points before caching their weapons and disappearing back into the civilian population – which they often achieved before the Apache gunships arrived. However, some larger contacts lasting up to 3 hours were still being experienced during ‘Herrick VI’ and ‘VII’, generally in areas where the insurgents were protecting a leader or a weapons cache.

Here, an eight-man British section (1) have been ambushed by multiple insurgent firing points. They have taken cover in an irrigation ditch, and are returning fire to suppress the enemy before attempting to flank them. The patrol commander at the rear is using his Bowman radio to send a quick contact report to the Ops Room (‘Contact, Out!’). The GPMG team and LMG gunner at the head of the patrol (2) are attempting to suppress the closest firing point (3), but other insurgents infiltrate through the cover along the ditch (4). At the edge of a recently harvested crop-field to the right, an insurgent stands up to launch an RPG; beyond him, others are firing a PKM machine gun from a rooftop (5 & 6, and insets 2 & 3).

Meanwhile, on higher ground at some distance to the left (inset 1), elements of an FSG try to positively identify both the enemy firing points and the location of ‘friendlies’ before engaging. We represent here a R-WMIK mounting a .50caI HMG, a Javelin ATGM operator, and a sniper pair of spotter and shooter armed with an L115A3 rifle. In the right background, civilians are streaming out of the compound. Civilians leaving or being unusually absent from an inhabited area was considered a strong ‘combat indicator’. However, insurgents would sometimes force civilians to stay in compounds that they used as firing points, in the hope that ISAF return fire would hand the Taliban a grim propaganda victory.

For more reading on the war in Afghanistan take a look at WPN 29: US Combat Shotguns, FOR 26: Afghanistan Cave Complexes 1979–2004, ELI 163: Special Operations Forces in Afghanistan, GNM: Helmand: Diaries of Front Line Soldiers and ELI 206: The British Army in Afghanistan 2006–14.