On 20 October 1944 the Philippines Campaign began with American troops landing on the eastern Phillipine Island of Leyte. They rapidly took control of the beachheads, allowing General Douglas MacArthur to make a dramatic return to the Phillipines following his escape in 1942. 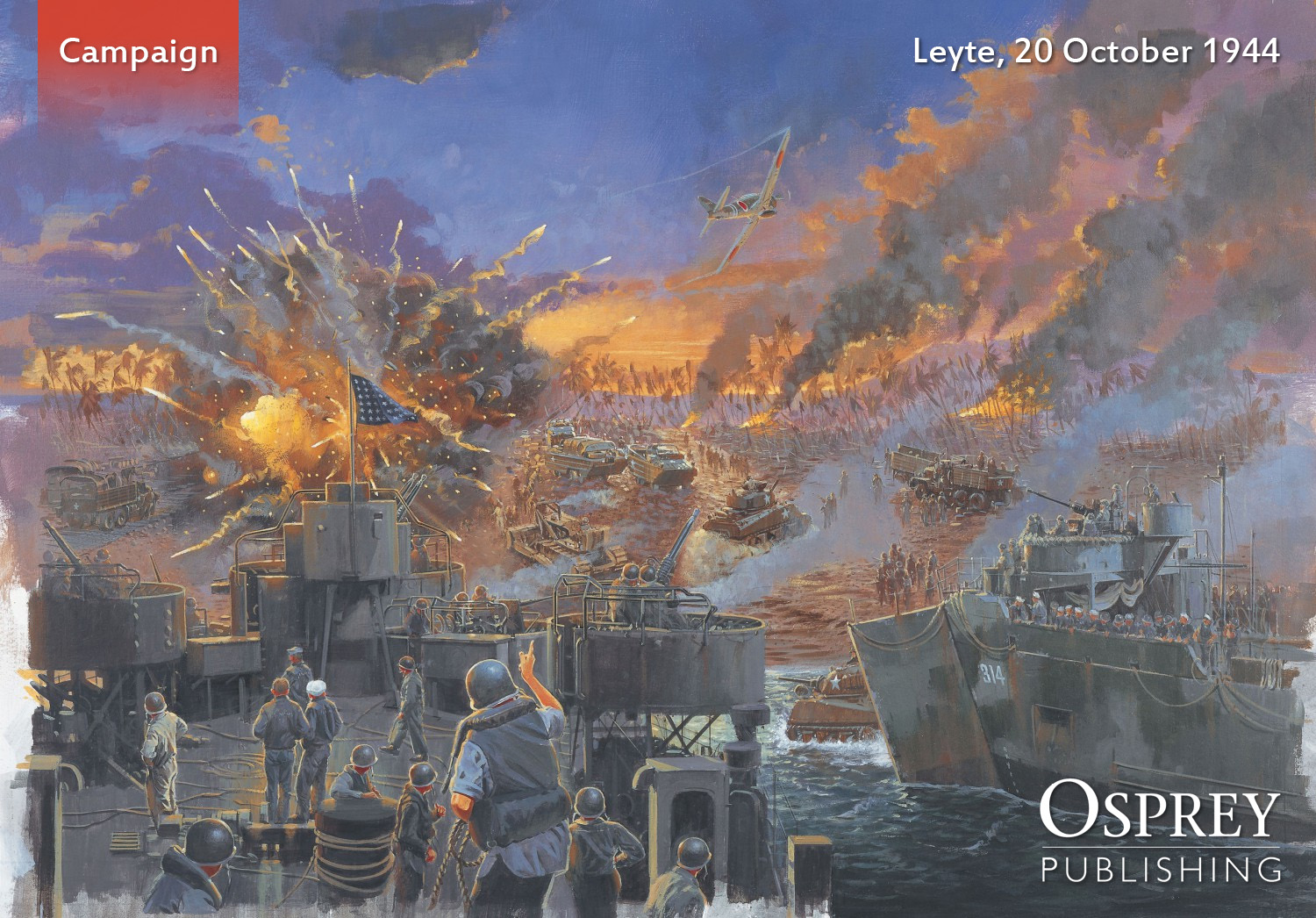 Such was the scale of the amphibious assault on Leyte Gulf that it was divided into Northern and Southern Landings, the two separated by about 11 miles. The latter operation was the responsibility of V Adm Theodore S. Wilkinson’s TF79, which put ashore XXIV Corps (7th and 96th Divisions) on a 5,000-yard front. On its far right were Orange One and Orange Two beaches, the latter having to its right the small rise of Liberanan Head, with the greater height of Catmon Hill looming beyond.

It is the evening of ‘A-day’. The initial assault went in ten hours earlier, successfully and almost unopposed. Sporadic enemy mortar fire from the high ground has caused some damage and casualties but has been quelled by the advance of forward units to their first-day objectives about three miles inland. The big transports laying offshore have been largely discharged and, the surviving assault craft recovered, the beach is now occupied by large landing craft. Early tensions have subsided and there is something of a relaxed atmosphere as the heavy equipment goes ashore in support of the 383rd Infantry Regiment of the 96th Division. Battered by days of relentless US carrier-based air strikes, Japanese airfields are, by now, almost denuded of aircraft but, although mauled, enemy air power cannot be assumed impotent.

Suddenly, over the organized chaos of Orange Two, there is the roar of a low-flying aircraft. From the direction of the town of Dulag, to the left, a Zeke fighter bomber banks steeply, its approach screened by smoke from fires still burning from the morning’s pre-landing bombardment. Its two 60kg bombs hit the crowded beach area and the incident is over in seconds, too quickly for the numerous, closed-up gun crews to react. With scarcely a valedictory shot being fired, at least one Japanese aviator lives to fight another day.

Our observation point looks across the foredeck of a Landing Ship, Tank (LST). In length 328 feet (100 metres), and displacing 4,080 tons fully loaded, an LST has a range of 6,000 miles and is well capable of making ocean voyages. Up to seven 40mm and twelve 20mm guns give them considerable defensive capability. Where a beach has a very shallow declivity, the LST bow doors may connect with floating causeways. Where these are not available, sand causeways may be thrown up by an armoured dozer. To our right is the distinctive forward end of a Landing Ship, Medium (LSM), a smaller, 203.5 foot vessel with a load capacity of five medium or three heavy tanks. Through the deepening gloom of early dusk, the residual fires show brighter, their pall almost obscuring the Catmon heights.

Following much Pacific experience, few personnel and little equipment is left to linger on the beach. Specialist gangs shift the unending cargoes of supplies and ammunition quickly and expertly, most heavy trucks having already ground their way inland. A few late Shermans are coming ashore, their leader struggling as it bogs down in the soft sand. Adjacent to the beach exit are two of the invaluable DUKU, 212-ton 6x6 amphibian trucks. Popularly known as ‘Ducks’, these vehicles can shift either 25 equipped troops or over two tons of cargo direct from ship to shore and, if required, beyond. Even as this continuous activity progresses, the whole operational Japanese fleet is concentrating, far to the west. The mortal challenge that it represents is still, however, four days distant.

If you'd like to read more about the Leyte Gulf then take a look at Campaign 163: Leyte Gulf 1944 by Bernard Ireland.