This week Osprey Publishing released the eBook edition of my book Longshore Soldiers. To mark the occasion, I painted up a diorama of my grandpa's company moving supplies on Utah Beach.

"I didn't mind moving the ammo. It was the gas that worried me I didn't want to burn to death [if a German shell hit the DUKW]" —Cortland Hopkins, in Longshore Soldiers.

In WWII my grandfather served in a US Army port battalion. Port company stevedores unloaded supply ships. This was ordinarily done on the docks of a port, but for the Normandy invasion they needed to load DUKWs (amphibious trucks) and drive the cargo to shore. On Utah Beach and Omaha Beach this was done under weeks of German shelling and aerial bombing. 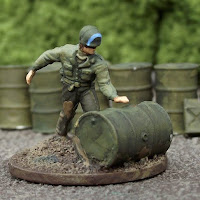 My book charts my grandfather's service from enlistment to Boston, England, Utah Beach, and Antwerp. After all that research I was also inspired to paint-up some port company models. Finding a DUKW was easy. I bought a plastic 1/72 Italeri model. This was the first model I built in about 15 years. Naturally I lost a tiny piece, glued my fingers together, and stabbed myself in the leg with an X-Acto blade. My DUKW had rear view mirrors for a time, but after taking these pictures I noticed that they had snapped off without me noticing. 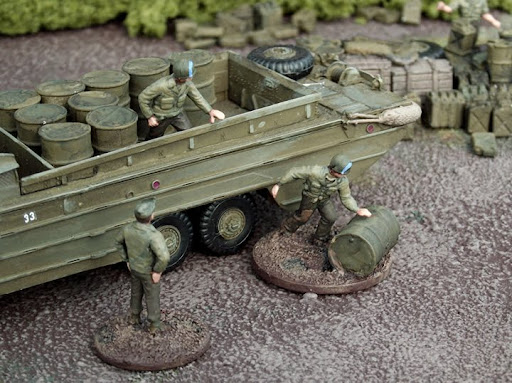 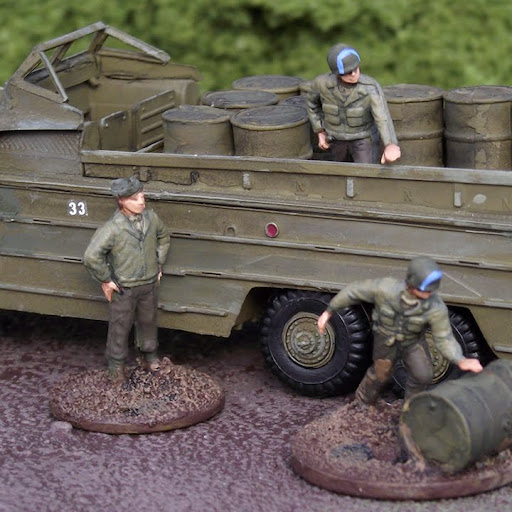 Finding suitable stevedore models in 1/72 was slightly more difficult. Really the only choice was a box of Airfix's U.S.A.F. Personnel (see the full sprue scan on PlasticSoldierReview). The working poses lacked helmets, so I chopped off the head of the MP model and glued them on the worker bodies. 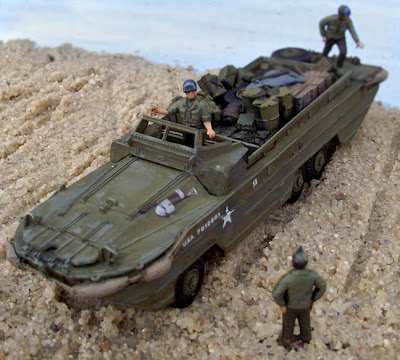 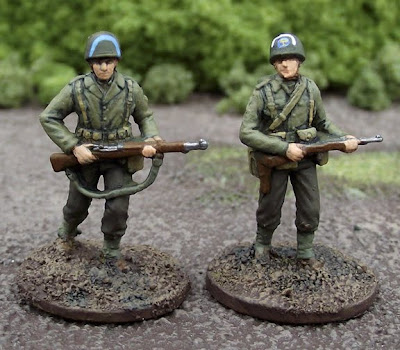 Pictured above is my grandfather Cortland on D-Day (on left). His jacket showed no marks of rank. He's carrying an M1 Garand he picked up from a fallen soldier, because his carbine jammed during the fight. On the right is Donald H. on guard duty. One of the veterans I interviewed, Don served in the 284th Port Company, attached to the 5th Engineer Special Brigade on Omaha Beach. He carries the standard firearm for port company troops, an M-1 carbine. These are Italeri models.
The helmet markings worn by the port battalion troops are especially interesting. For the D-Day invasion my grandfather's unit was attached to the 1st Engineer Special Brigade. All attached troops received a blue arc. Below is a color photo of some 1st ESB men on Utah Beach in 1944. Port battalion helmets on Omah Beach received the marking of the 5th and 6th Engineer Special Brigades. There's was a white arc with a blue & yellow amphibious training command insignia underneath. This insignia is visible as a shoulder patch in the photo below. 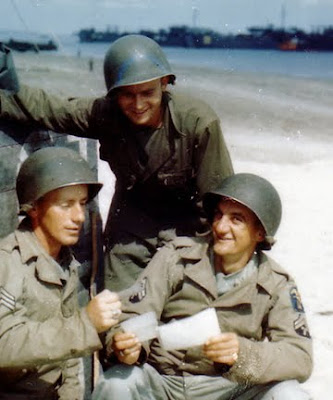