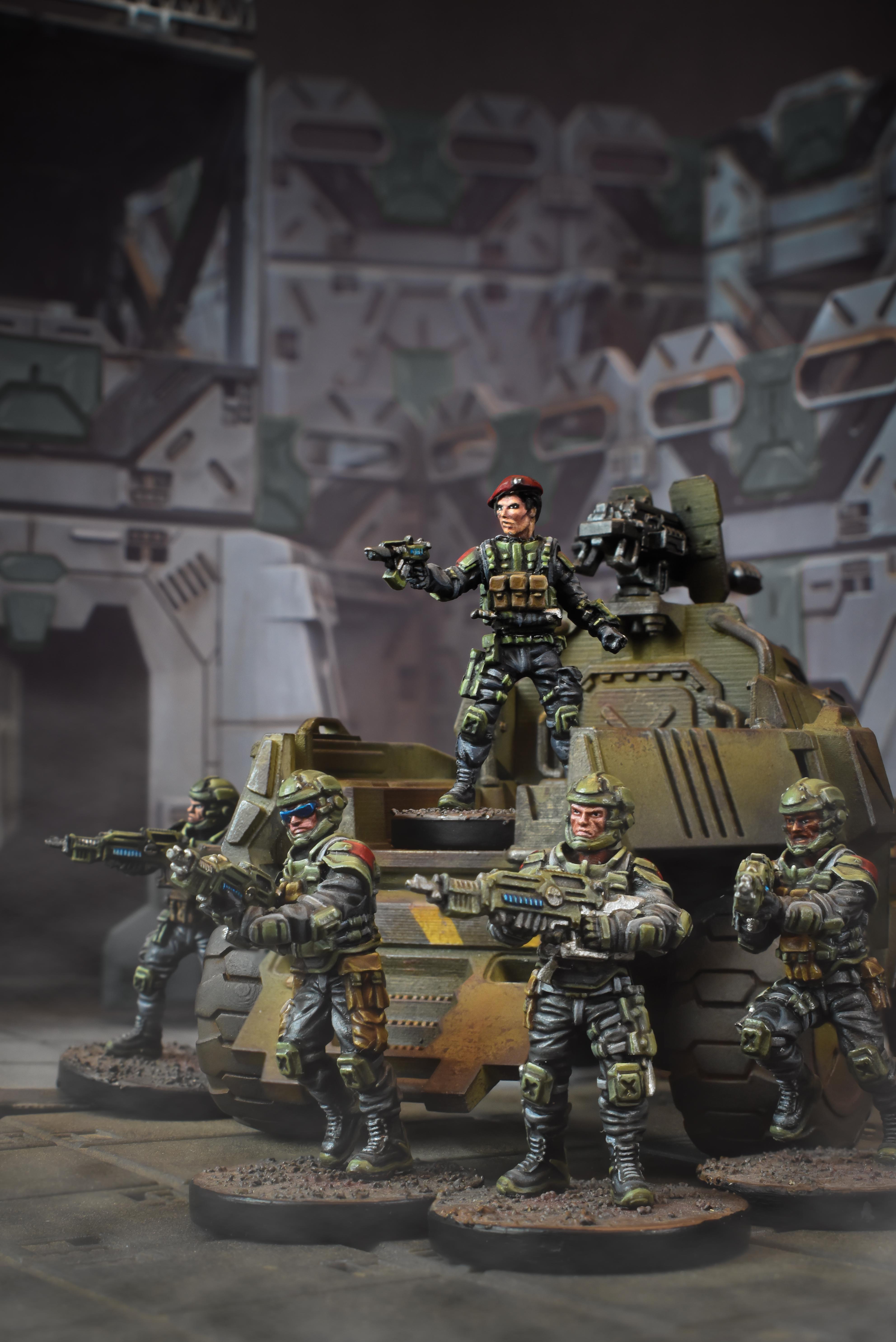 Xenos Rampant, the sci-fi variant of Daniel Mersey's large skirmish Rampant wargaming system, is finally here next week. While you're gluing your models, getting your paints ready, and drawing up your army ideas - hear from co-author Richard Cowen all about the process behind its creation, and get a sneak peak at how it plays...

Like most wargamers of my age, it all started with Heroquest and, a Christmas or two later, Space Crusade. From there, the adventuring parties and Space Marine boarding squads expanded into armies that moved using tape measures rather than squares. Over the decades since, a series of games and settings have marched in and out of my hobby, and the armies grew and grew until each new project was doomed never to be finished.

Then I was introduced to Frostgrave. A maximum of ten members per warband, plus a few zombies and other monsters for NPCs, seemed a lot more achievable. So, I went out and bought way too many models (I may have issues with self-restraint). My ‘compact’ warband consisted of a couple of necromancers, forty cultists, and several dozen undead. This warband was too big for Frostgrave but, as it turned out, perfect for Dragon Rampant. I even finished painting them all. Then I collected warbands of Chaos Dwarfs, pleasure cultists, barbarians, landsknecht, and samurai, at which point I realised I had replaced one addiction with another.

A large part of my miniature collection, armed with laser rifles and plasma guns, started to feel neglected, so I began to develop a ruleset that would eventually become Xenos Rampant – a science fiction modification of Dragon Rampant. I shared this on the game’s Facebook page and my own blog where it was quite well-received. I then got ambitious and emailed it to one Daniel Mersey. This was to see if he objected to me sending a proposal to Osprey to expand my little fan mod into a proper book. He said, sure, so long as we co-author it. Dan sent in the proposal, and Phil at Osprey liked it.

I would say the rest is history but since Xenos Rampant hasn’t yet been released, it’s kind of the opposite. It’s the future, appropriately enough. 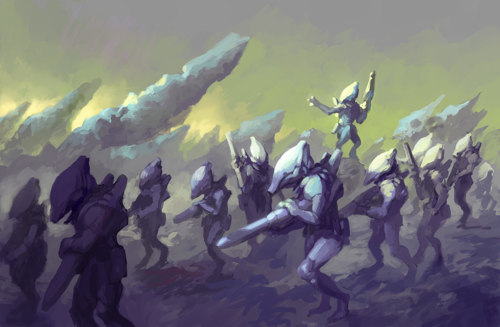 What Can Players Expect From Xenos Rampant?

Dan’s written a whole family of Rampant titles, covering historical periods from the medieval era, through pike & shot, horse & musket (both with Michael Leck), all the way to 19th century colonial warfare. The family patriarch, Lion Rampant, has just regenerated into a second edition but its original edition provided the genetic material for Dragon Rampant, its fantasy counterpart. By my genealogical reckoning, that makes Xenos Rampant, to continue the tortured family metaphor, Lion Rampant’s grandchild.

If that’s not explanation enough, Xenos Rampant is a large skirmish wargame inspired by the science fiction wargames of the 1980s and 90s. However, it is a modern ruleset that emphasises fast play and intuitive rules mechanics, while also not being bound to any era or style of science fiction nor any specific ranges of models. As in the days before the widespread availability of plastic kits, armies consist of 30–40 infantry with maybe a vehicle as a centrepiece. Of course, nowadays, you can get a couple of boxes of plastic models quite cheaply meaning you don’t have to break the bank to put a force together.

Gameplay is based around the unit which typically consists of a single vehicle or 5, 10, or, occasionally, 15 infantry (although particularly heroic or hulking warriors can be fielded in reduced size units, or even as individual models, without affecting their stats). Units act as a single body, speeding up play dramatically compared to systems where each model does its own thing. This is most notably seen with upgrades, such as heavy weapons or specialist melee weapons, which are abstracted to enhance the overall combat power of the unit. 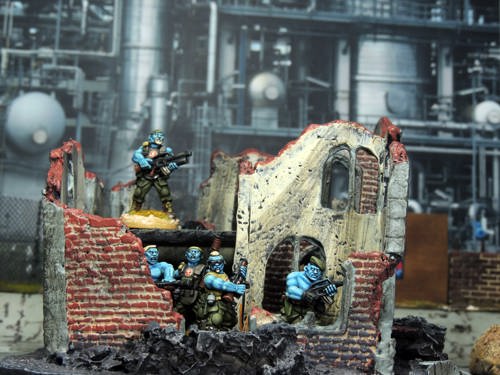 Differences to Other Rampant Titles

There are more aliens in Xenos Rampant.

As I mentioned the Rampant family tree earlier, Xenos takes its cues from Dragon Rampant including conventions from that game such as Strength Points, reduced model units, and the ability to customise units with a chapter full of special rules. However, there are a number of distinct differences.

The most obvious difference is vehicles. Xenos Rampant is the first Rampant title to be set as late as the 20th century (unless you’re playing very late era The Men Who Would Be Kings). Because of this it’s become necessary to incorporate vehicles into the game engine. We’ve kept the rules simple, it’s mainly slight modifications to movement, plus the ability of vehicles to shoot on the move. They also tend to have exceptionally high Armour values, but don’t worry, because anti-tank weapons also exist. The game is about infantry or combined arms skirmishes rather than sweeping tank battles. A typically sized detachment is limited to one armoured vehicle (either a Fighting Vehicle or a Transport Vehicle), but may be able to fit in a few more Soft-skin Vehicles if the points allow it.

Shooting in previous Rampant games is pretty one-sided, due to the low rates of fire of bows, crossbows. or muskets when compared to melee clashes, where both sides stabbed and hacked each other to death. In Xenos Rampant, faster-firing assault rifles or plasma blasters mean that most infantry units can engage in firefights when they’re shot at, i.e. they get the chance to shoot back. However, this only takes place the first time they come under fire each turn (which brings some tactical choices for your opponent around the order they activate their units). Furthermore, most units can now fire further than in previous Rampant games, though to reduced effect. As in the real world, the most lethal shooting still takes place at close quarters, while longer ranges are more for keeping your enemies’ heads down.

Related to that, the morale rules have had a spanner taken to them as well. Instead of representing the exhaustion and demoralisation of troops over the course of a battle, Courage tests reflect the sudden desire of troops not to be in the same place as incoming fire. In the simplest terms, rather than fleeing the field when their morale eventually collapses, units might run for cover the moment they come under fire, only to rapidly steel themselves once there’s a layer of bricks between their fleshy bits and the enemy’s bullets.

Away from the direct battlefield mechanics, the Commander of each force can now choose which of four themed charts generates their distinguishing trait. This allows you to tailor your Commander to your preferred play style. The campaign system also allows Commanders to earn further traits or even remove any negative traits they have acquired.

The game also includes optional rules that may be more relevant for some sub-genres of science fiction than others. The chapter for weird wars has national traits for different factions of the two World Wars. Meanwhile, too much gunfire in an urban fantasy clash between cultists and occult investigators runs the risk of NPC cops showing up, while the same situation in the post-apocalypse can result in either empty guns or hungry zombies. Or both. The chaos of modern military operations, such as fleeing civilians, unexpected reinforcements, sudden air strikes, or night-time raids is covered in the alien invasion chapter. The chapter on space opera games contains rules for boarding actions, including how to breathe hard vacuum when your anti-tank missile hits the outer hull. These optional rules are all plug-ins to the main rules, so if you want to send your Delta Force operators aboard an orbiting alien vessel, have the glorious dead attacking both sides during the Siege of Verdun, or risk NPC imperial peacekeepers interfering with your far future corporate war, you can do. 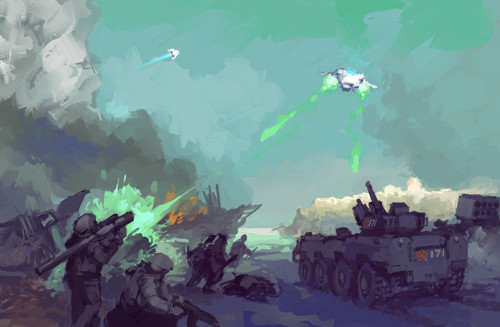 How To Get Started

Xenos Rampant’s army list consists not of specific squads from a particular faction inhabiting a prescribed setting, but of general unit types that players can customise to their own designs.

This means that pretty much any range of models can be used to create a detachment, even mixing and matching manufacturers within the same force. Just pick a few dozen troops that catch your eye, from any genre of sci-fi, and then pick relevant units from the book for them to represent. Expanding an existing force from another game, such as Stargrave, Zona Alfa, or Black Ops, is a perfectly valid way of assembling a detachment for Xenos Rampant.

Alternatively, you could come at your detachment from the opposite direction, organise your army from the unit list in the book and then find the models to represent them.

Finally, although there is no specific setting for Xenos Rampant, we’ve included 44 sample detachments in the book. These range from Nazi xenotechnologists and Allied magician-commandos, through to back-alley cultists, police SWAT teams, sewer-dwelling ghouls, various modern military formations, the aliens that slaughter them, the barbarians that roam the nuclear-scarred wastelands after the aliens have left, and the many and varied types of shiny or grimdark far-future starship crews and the strange things they encounter in the voids of space. These are entirely optional rather than being set army lists but should hopefully give you a few ideas when creating your own force.

Xenos Rampant is out next Thursday, November 24th. Pre-order today.