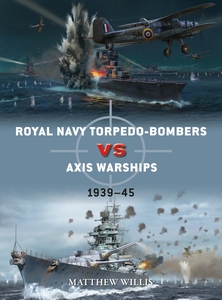 The use of self-propelled torpedoes to attack warships transformed naval warfare, and the development of aircraft to deliver them promised to transform it out of all recognition. It is a popular notion today that aircraft, particularly those toting torpedoes, rendered the battleship obsolete. But is this view accurate?

It is true that a handful of obsolescent Fairey biplanes devastated the Italian battle fleet at Taranto in November 1940, following that up in March 1941 with a strike that left three heavy cruisers helpless in the face of the RN’s big guns. To cap it off, more biplanes did the same for the mighty Bismarck a couple of months later.

As if further confirmation were needed, the battleship HMS Prince of Wales and battle cruiser Repulse were sunk by swarms of Japanese torpedo bombers in the South China Sea in December of that year. And while the US Navy experienced many problems with its aerial torpedo, initially exacerbated by the inadequate Douglas TBD torpedo bomber, by 1945 it was making excellent use of the weapon, sinking the biggest battleships in the world, Yamato and Musashi, with massed strikes by TBM Avengers.

And yet was the death of the battleship exaggerated? While the end of World War II appeared to show that a capital ship could not hope to stand against air-launched torpedoes, in fact the writing on the wall was beginning to read rather differently.

The self-propelled torpedo was developed in the second half of the 19th century, most successfully in the form of the Whitehead torpedo. This weapon aimed to replace the spar torpedo, an explosive device deployed on a long boom by a small boat. The spar torpedo required the attacking boat to approach to within a few feet of its target for deployment which, even if successful, put the attacking vessel at risk of damage from the explosion. The self-propelled torpedo, on the other hand, could be launched from a safe distance, its speed giving the target little time to react. Whitehead torpedoes were first used in the Russo-Turkish war of the 1870s, to devastating effect.

The self-propelled torpedo meant that under the right circumstances, a small, cheap launch could sink a mighty battleship. Battleship batteries were developed to include multiple small quick-firing guns to counter torpedo boats, and an entirely new class of escort vessel – the ‘torpedo-boat destroyer’ (soon shortened to ‘destroyer’) was created to protect the battle fleet from the threat.

It was entirely natural that when aeroplanes were first adopted for military use, torpedoes were considered as potential weapons. Aircraft could circumvent many of the anti-torpedo boat defences, and were themselves cheaper and potentially more plentiful than torpedo boats. The first successful test drop of a torpedo from an aeroplane was made by Sqn Ldr A. M. Longmore in July 1914, and the first successful attack on a ship with an aeroplane-launched torpedo was carried out two years later in the Aegean.

Although the modern aircraft carrier was developed by the end of World War I, along with torpedo carrying aircraft with wheeled undercarriage and relatively high performance, it would take until World War II for the weapon to come into its own. While the Fleet Air Arm of the Royal Navy took a little while to build up combat experience with torpedoes and iron out complexities that had not been apparent in pre-war exercises, by the summer of 1940, successful torpedo attacks against enemy warships in port and at sea were being made. The knowledge acquired during operations off Norway and in the Mediterranean was successfully combined in the attack on the Italian battle fleet at Taranto. Further attacks by torpedo aircraft seriously damaged the battleship Vittorio Veneto and the heavy cruiser Pola at the Battle of Matapan, leading to the destruction of the latter along with two others. It seemed as though the battleship was powerless against the torpedo bomber.

And yet, the battleship would experience a resurgence, and the torpedo bomber was arguably in decline from this point. The problem was the increasing lack of survivability for torpedo aircraft when attacking enemy warships. Heavier and heavier anti-aircraft armament, modern quick-firing autocannons and, most devastatingly, radar-laid guns meant that from the middle of World War II, the chances of scoring enough hits – or any at all – began to diminish, even at night. The torpedo bomber hit back with higher performance aircraft and new fire-control technology, and experimented with new tactics, but nothing gave the torpedo bomber back the advantage it had enjoyed in 1940–42 when inadequate detection and defence had allowed it to make hay.

While torpedo bombers continued in the inventory of major navies well into the 1950s, it was clear that without highly favourable circumstances, it was unlikely that enough aircraft could survive in the target area long enough to deliver sufficient weapons on target, even with overwhelming force. Other weapons such as the guided glider bomb and then the anti-ship missile appeared to offer better results. When the Royal Navy began to develop a high-performance maritime strike aircraft in the 1950s to counter the threat of powerful Soviet cruisers, the chosen weapon was a nuclear bomb, delivered by toss-bombing.

In reality, the heyday of the torpedo bomber was short – the Royal Navy’s major successes all fell within a seven-month period. The ‘Channel Dash’ and the Battle of Midway in 1942 highlighted how vulnerable low-performance torpedo bombers could be without air superiority. And while further successes were achieved, these tended to be where overwhelming force could be brought to bear against a weakened enemy. The weaknesses of the torpedo bomber in the face of ever improving defences were masked somewhat by the increasing withdrawal of large German warships, the surrender of Italy, and the US Navy’s mounting dominance in the Pacific, but the zenith of the torpedo bomber had already passed. The battleship, along with other large gun-armed warships, continued to find useful roles into the 1990s, although they too would never again represent the core of the fleet.