On the blog today, we're sharing the second extract from new Essential Histories title 'The Franco-Prussian War 1870-71' by Stephen Badsey. 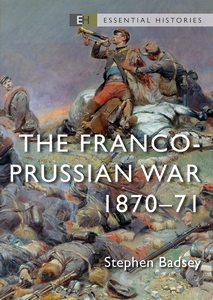 On 26 February 1871 National Guard troops appropriated 200 cannon that had been bought by subscription during the siege, taking them to the radical stronghold of Montmartre, and forming a central committee of radicals and revolutionaries. With the French Army effectively disarmed by the Germans, this made the Paris National Guard the strongest military force that France possessed. On 18 March a contingent from the French Army in Paris, about 15,000 men, was ordered up to Montmartre to recover the cannon.

In a confused episode the troops refused to obey orders; an excited mob seized their commander, General Claude-Martin Lecomte, together with General Jacques Clément-Thomas, the National Guard’s former commander, and both were shot. Remaining members of the National Government and loyal troops fled or withdrew from Paris. A red flag was flown from the Hôtel de Ville, proclaiming the revolution. Their own success caught the revolutionaries by surprise; their first acts were to legislate changes in the local government of Paris, including debts and rents, and they continued to issue proclamations in the name of the republic. On 26 March a city-wide election confirmed them in office, and two days later at the Hôtel de Ville they announced themselves as the Commune of Paris (literally, a ‘community’ or town council), invoking the revolutionary spirit of 1792–94 but also promising greater self-government for the city.

The creation of the Commune had as much to do with ideology and symbolism as with any political programme, and its members spent much time debating among themselves what they represented. The poet Paul Verlaine held a prominent position in the Communard press office, and the impressionist artist Gustave Courbet organised its committee of artists. Although few Communards were genuinely working class, they included social reformers as well as anarchists, and also a small number of prominent women. Although smaller uprisings took place in other French cities, notably Marseilles, this was once again almost entirely a Paris phenomenon, gaining no national support. Even Garibaldi condemned the Commune, returning to Italy, while Victor Hugo sought exile in Brussels.

While the Commune debated its own meaning, the new French government was thoroughly alarmed. Although prepared to negotiate with Bismarck, Thiers took a very different view of the Communards, intending to recapture Paris when his forces were strong enough. Under the Versailles agreement, the Germans gave up control of the territory south of the Seine to the French Army. On Palm Sunday, 2 April, French Army troops, called Versaillais by the Communards, mounted an attack from the east near Neuilly, close to the sector from which the Great Sortie had been launched in October. Next day a Communard force – described as resembling ‘a hoard of turbulent picnickers’ – that set out to attack the National Assembly at Versailles itself was fired upon by artillery from the fort at Mont Valérien, and mostly fled.

The original idealism of the Commune rapidly shrank into mutual accusations, with a decree that hostages would be taken and executed if necessary. This was followed, as with the original Commune of 1792–94, with the resignation, flight or arrest of moderates, the creation of a ‘Committee of Public Safety’, and a progressive descent into dictatorship by terror. A shorter second siege and bombardment of Paris began, with the Versailles forces firing into the city, and minor probing attacks from both sides.

The German government was as hostile to the idea of the Commune as the French, and Bismarck agreed to changes in their peace agreement, first allowing 80,000 French troops to be sent north of the Loire, and then the rapid release of prisoners of war from Germany to rebuild the French Army. Otherwise, the German response to the Commune was to maintain their own positions and to prevent any movement into Paris through their lines. On 6 April Marshal MacMahon, who had returned from captivity in Germany, replaced General Vinoy as military governor with the responsibility of recapturing Paris. Within the city barricades were built and defences organised; but by the end of the month the Commune forces numbered no more than 30,000 effective troops, and critical strongpoints were being abandoned or left undefended.

The doomed Commune took refuge in symbolism and legend. The Committee of Public Safety started dating its decrees by the old calendar of the original Revolution, introduced in 1793. On 15 May, Thiers’ own house in Paris was destroyed by decree; and next day the massive Vendôme Column, erected by Napoleon I to celebrate his victories in 1805, was ceremonially toppled as a symbol of imperialism and militarism. There were even plans to obliterate Notre-Dame Cathedral. The shelling from the Versailles troops continued, mostly directed at the south-west corner of the Paris defences, including the forts at Issy and Vanves, and the nearby Point-du-Jour Gate. Finally, on the evening of Sunday 21 May, the Point-du-Jour Gate was discovered to have been abandoned and left undefended, and MacMahon’s troops entered Paris.

The next seven days became known in France as ‘Bloody Week’. As 70,000 troops advanced into the city, greeted by some Parisians as liberators, the Commune issued its last call to the barricades that had been built across the boulevards and through the city centre. Fighting was fierce and confused: ‘They shot you first and apologised to your corpse afterwards’, wrote one survivor. But by Tuesday the red flag had been hauled down and replaced by the French tricolour, and street battles gave way to executions by firing squads. Fires broke out in many prominent buildings, some of them ordered deliberately by the Communards, and only extinguished by the rain that began on Friday. Among the Commune’s last acts were the executions of some of those taken hostage or imprisoned, including the Archbishop of Paris, Monseigneur Georges Darboy. The final stand of the Communards took place in Belleville on Whit Sunday, 28 May, followed by further executions and imprisonments as the Thiers government obliterated the last of the Paris Commune. Among these dramatic events the remaining legal formalities took place to finally end the Franco-Prussian War.

If you've enjoyed the extracts, you can read more by ordering your copy of the book from the website here