On the blog today author Giuseppe Rava gives an overview of Italy’s colonial presence in Africa, Asia and the Middle East during the 19th and 20th centuries. 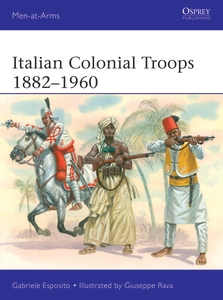 Men-At-Arms 544: Italian Colonial Troops, 1882–1960 is an overview of Italy’s colonial presence in Africa, Asia and the Middle East during the 19th and 20th centuries and offers a snapshot of the organisation, uniforms and battles of troops stationed in various outposts of Italy’s colonial empire. But how successful was Italy as a colonial power?

Italy was one of the last European powers to enter the colonial race of the 19th century, the ‘Scramble for Africa’ which ended with the partition of Africa between Great Britain, France, Spain, Portugal, Belgium and Germany. Italy was poor and thousands of Italians, especially those living in the south, had large families but no work; many had emigrated, draining the country of human resources. In 1878, King Victor Emmanuel II died and his son, Umberto, set about transforming Italy into a great imperial power using the newly reformed Italian Army. By 1880, most of Africa had already been colonized by Great Britain and France, and only a few territories remained vulnerable. Italy wanted a colonial possession that was located close to Sicily, its main goal being to settle large numbers of Italians from the poorest rural areas there. Tunisia was the obvious choice but, in 1881, France imposed a protectorate and Italy was forced to turn its attention to the Red Sea with its coastal areas unoccupied by other European powers.

Eastern Africa was dominated by the Ethiopian Empire, also known as Abyssinia, which had, in contrast to other native African states, some political centralization and a large military force. For centuries the Ethiopians had dominated most of Eastern Africa, showing little fear of the expansionism of European nations. Being a vast country inhabited by warlike tribes, Ethiopia was not considered a desirable colonial possession by most European powers, however, to the north and east, there were coastal areas which were much more attractive: Eritrea had been under formal Ottoman rule for almost three centuries and had been ceded to Egypt in 1865; Somalia was fragmented into a series of small native states. Both Eritrea and Somalia did not have great natural resources but their geographical location between the Red Sea and the Indian Ocean made them particularly valuable for routes of international commerce. This became particularly true after the opening of the Suez Channel in 1869.

In 1882, Italy decided to initiate a discreet colonization of Eritrea. With progressive territorial acquisitions over the years, it gradually became Italy’s first colony. This was followed by Somalia in 1889, acquired after a series of complicated diplomatic negotiations with local native states and the Sultanate of Zanzibar who held a protectorate over a portion of the region. But, Eritrea and Somalia didn’t prove particularly lucrative for Italy; there was no infrastructure and their terrain was not suited to agriculture. A limited number of Italian settlers migrated there which did little to resolve the economic problems within Italy itself. So, at the end of the 19th century, Italy decided to expand its colonial possessions inland by attacking the Ethiopian Empire itself. The Battle of Adwa in 1896 was a crushing defeat for the Italian Army by the Abyssinians, confirming that Italy needed to turn its attention elsewhere.

Libya, the last African province of the Ottoman Empire, had a tiny Turkish military garrison. With the Ottoman state on the verge of collapse, Italy decided to invade. The Italo-Turkish War of 1911–1912 saw a series of Italian victories over the Ottomans, ending with the Italian conquest of several coastal areas of Libya previously garrisoned by the Turks.

The advent of Fascism and the rise of Benito Mussolini impacted even more on Italian colonial policy. Italy finally completed its occupation of Libya, which had been almost completely lost during the years of World War I and, in 1935, Mussolini decided to invade Ethiopia again to seek revenge for the disaster at Adwa. Thousands and thousands of soldiers were transported to East Africa and were finally able to overcome the resistance of the Ethiopians. As a result, in 1936, Eritrea and Somalia were integrated within the newly-conquered territories of Ethiopia to form ‘Africa Orientale Italiana’ (Italian East Africa).

Italy had managed to build itself an Italian Empire but, in southern and western portions of Ethiopia, local resistance was still active and East African colonies were still dependent on receiving supplies via the Suez Channel controlled by the British. All of this erupted in 1940 when Italy entered World War II on Germany’s side and attacked Egypt from Libya and invaded British Somaliland. The Ethiopian population revolted and the British responded by conquering Italian East Africa (1941). Two years later, despite Rommel’s victories, Libya was also invaded by the Allies and Italian presence in Africa was completely destroyed.

In 1947 the Treaty of Paris freed Libya from Italian colonial control and assigned Eritrea to Ethiopia. Somalia, however, was transformed into the ‘Trust Territory of Somaliland’ and remained under Italian control until 1960 when it was united with British Somaliland to form the new and independent Somali Republic.

Italy also had colonial possessions in Asia and was part of the multinational military coalition that defeated the Chinese Boxer Rebellion in 1900. After the signing of the Boxer Protocol which partitioned China, most of China’s coastal areas were annexed as ‘concessions’ and Italy obtained the so-called ‘Tientsin Concession’ which was located not far from Peking. It was small but quite lucrative and was expanded at the end of World War I when Italy annexed the Austro-Hungarian concession in China that bordered with their own. Tientsin remained an Italian colony until September 1943 when Japan occupied it following the fall of Mussolini and Italy’s change of alliance during World War II.

After the end of World War I, Italy did its best to obtain other territories in the Middle East following the fall of the Ottoman Empire. In 1919 an Italian expeditionary corps was sent to occupy the Adalia region of southern Turkey. At that time, the Anatolian territories of the former Ottoman Empire were under attack from the Greeks and the Greco-Turkish War had already broke out. Hoping that the new Turkish state would be weak, both Italy and Greece tried to obtain control over the regions of western and southern Anatolia that were rich in natural mineral resources. The Italian occupation of Adalia led to protests from the Greek government and Italy retained possession only of the city of Adalia.

Italy’s colonial desire as a unified nation state was strongly motivated by both political and economic objectives. Men-At-Arms 544: Italian Colonial Troops, 1882–1960 provides a detailed overview of the forces, battles, uniforms and weapons employed by the Italian state to build and maintain its diverse empire overseas. We hope you enjoy reading it!