On the blog today, David Nicolle, author of Medieval Indian Armies (1) looks into why there have been so few books on the topic and discusses his visit to India. 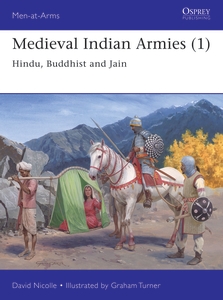 So why have there been so few books on pre-Islamic medieval Indian military history? Perhaps the main reason is that, for decades if not for centuries, scholars have shown little interest in this subject, focusing instead upon the epic struggle between India’s Muslim conquerors and those generally fragmented forces which attempted to resist them. Without an established corpus of in-depth scholarly research, it has been extremely difficult for those of us who are happy to be called ‘popularisers’ to write books like those in Osprey’s long-established Men-at-Arms series.

What is clear is that, from the 7th century AD, there was a prolonged struggle between the indigenous non-Islamic civilizations of the Indian subcontinent and those of the eastern Islamic world, concluding with the rise of the Mughal Empire in the 16th century. Consequently, I believe that there is a real need for a book aimed at the general readership, as well as those on what might be described as the first rungs of an academic career. Whether the forthcoming two volumes in the Men-at-Arms series can start to satisfy this need, I leave to readers to decide.

The difficulties of producing such a study nevertheless remained. India is often described as a subcontinent because of its size and variety, but where Indian history is concerned there is also the question of how far medieval Indian civilization spread and what therefore counted as ‘India’. For the purposes of these books ‘Medieval India’ covers modern India, Pakistan, Bangladesh, Nepal and parts of Afghanistan, but excludes Sri Lanka, Burma, the East Indies and Indo-China.

Then there is the unfortunate fact that some on the nationalist wing of Indian scholarship still regard the medieval period as one of Hindu ‘failure’ in the face of Islamic ‘aggression’. In reality there was no lack of courage or commitment on the part of Hindu, Buddhist and Jain peoples and their rulers. Indeed, their resistance proved largely successful for more than five-and-a-half centuries, while there were also long periods of peace during this period. Furthermore, some have attributed Muslim military success to political failures by non-Islamic rulers, ignoring comparable fragmentation on the Muslim side as well as an inferiority in military structures, armaments, organization and tactics. Some scholars have pointed to a growing tendency among medieval Hindu elites to renounce the world and become religious ascetics, or a tendency for rulers to commit suicide if defeated, desiring a heroic death as the best outcome of life, rather than continuing to resist.

Above all there remains the great variety in Indian climates and seasons. In fact, the monsoon seasons remained a major factor in Indian warfare, with rain and heat making campaigning virtually impossible from May to September across most of the country. The best campaigning season was therefore October and November when crops were ripe and green, which also made it possible for troops and their animals to live off the land.

In this first volume I have investigated the traditions of non-Islamic medieval Indian warfare, which were most evident in recruitment patterns as well as in the significance of both archery and cavalry. The role and impact of war-elephants are also considered, along with Indian traditions and technologies in arms and armour. 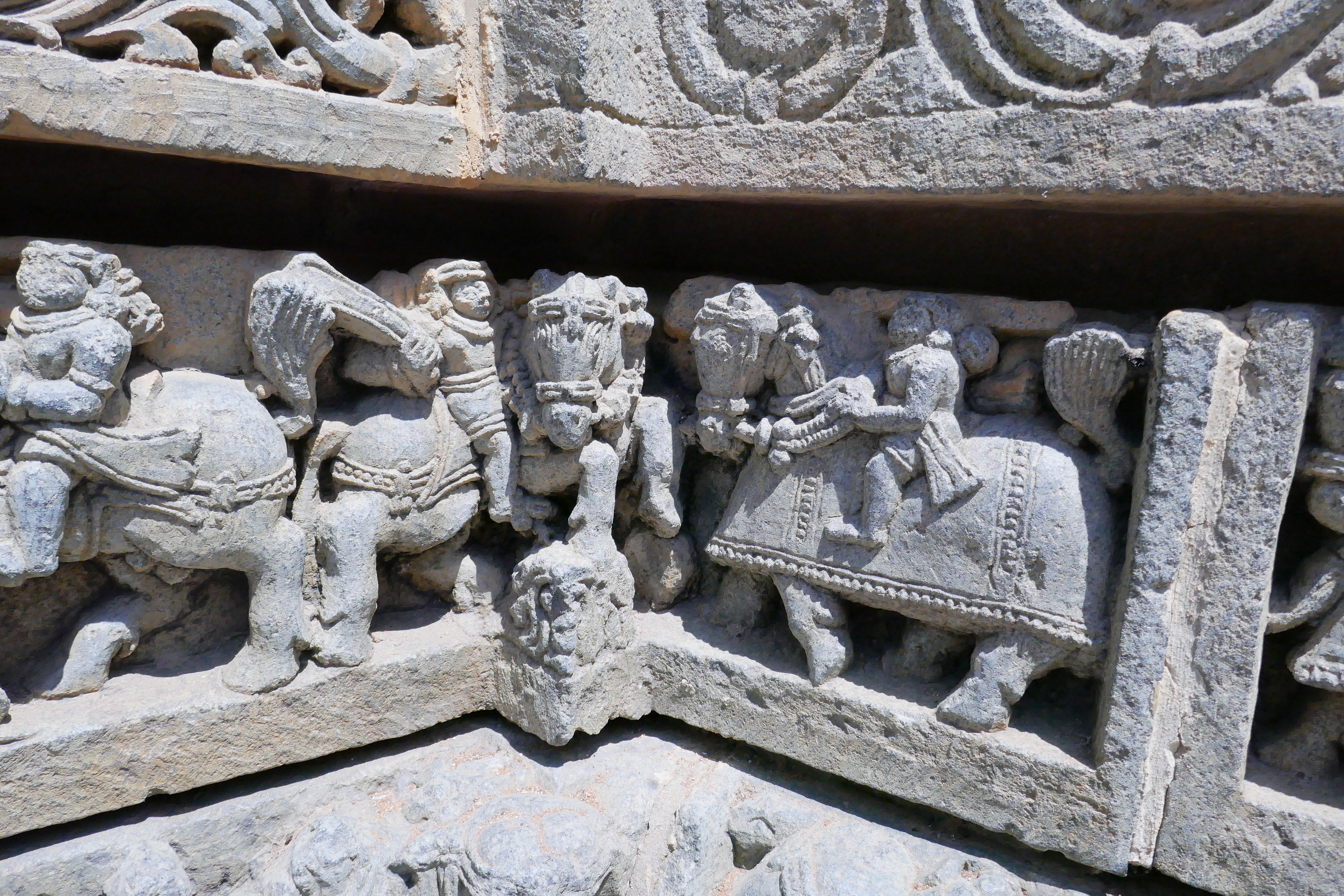 A confrontation between two sword-armed cavalrymen, one riding a horse with a form of cloth-covered horse-armour, on the exterior of the Chennakesava Temple at Somanathapura in Karnataka, and dating from 1268. (Author's Collection)

I and my wife Colette first went to India in 2012 for our son’s second wedding party, undertaking a journey which included Delhi, Agra and finally Kolkata from where our daughter-in-law’s family originates. That was when I decided to persuade Osprey that a book on medieval Indian armies for the Men-at-Arms series was not only desirable but was also feasible. The main reason – or more correctly the real excuse – for our second visit in early 2020, just before the Covid 19 crisis erupted, was to enable me to carry out further research for this book. In fact, I had signed the contract to write it without telling Colette, who had been under the illusion that her husband had retired. For me, of course, it was a fine excuse to go looking for carvings and other images of ‘chaps in armour’ – a passion I had inherited from my father, the illustrator Pat Nicolle.

This second journey was to southern India, to try to follow up on the pioneering work undertaking by the late French scholar, Jean Deloche, in his Military Technology in Hoysala Sculpture (Twelfth and Thirteenth Century), published in New Delhi in 1989. Much Hoysala temple architecture does, in fact, include an abundance of small carved military figures. Those of particular interest showed episodes from the Mahabharata Hindu religious epic written in Sanskrit between the 4th century BC and the 3rd century AD. As such, it includes warriors, war-elephants and similar scenes. Fortunately, the traditions of Hoysala art mean that for me the most interesting carvings tend to be outside on the lowest bands of horizontal carving, from ground level to 1 metre from the ground: easy to see and photograph, but also a bit hard on the knees of a man then in the final months of his 75th year. And they went around the entire circumference of the central temple building, which meant crawling on my knees on stone pavements rendered extremely hot by the south Indian sun, even in February!

Among the most interesting for a historian of arms, armour and related subjects, was the Chennakeshava Temple built in 1268 at Somanathapura, east of Mysuru. It is also one of best-preserved temples in the Hoysala style. The huge amount of money required for its construction and decoration came from Somanatha, a Dandanayaka (leading army commander) of the Hoysala King Narasimha III (r.1263–92). Somanatha had also just established a village named after himself, Somanathapura, on the banks of the Kaveri River. Indeed, I think that the care given to the portrayal of warrior figures reflects the fact that this temple was endowed by one of the kingdom’s leading military commanders. Certainly, these images include a greater abundance and variety of detail of arms, armour, horse and elephant harness, as well as other aspects of what might be called military life, than are seen in most other temples yet studied by the author. 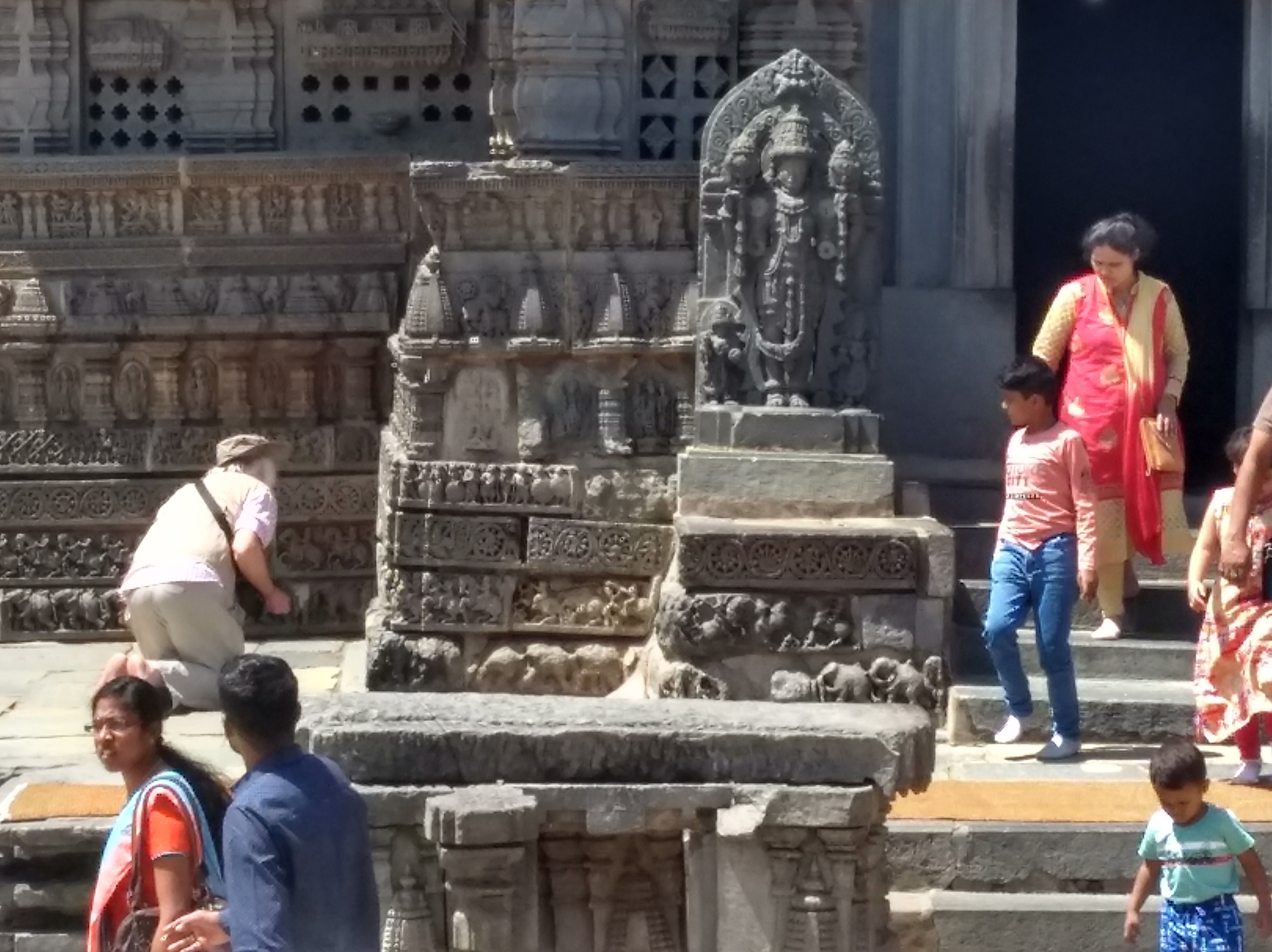 Medieval Indian Armies (1) is now available to order on our website.