In today's blog post, we're looking at three fantastic pieces of artwork from three of our July 2022 titles. Let us know what you think in the comments section and, if you would like to see any artwork from any of our August titles, be sure to mention that too!

British Celtic view: As the light slowly returned over the narrow strait between the island of Mona and the mainland, word reached the British camps that the Roman army was crossing. A young boy, a refugee from the Ordovices whose family fled to Mona after their hillfort home was taken and destroyed by Paulinus’ troops, has hidden among the branches of a tall tree. Here he can watch his kinsmen finally take their revenge on the hated Roman soldiers who have occupied his tribes’ land. The British force has massed among the trees lining the beach, where they wait, ready to drive the invaders back into the water. A group of druids stand in the shallows, their arms thrust toward the sky, and black-clad priestesses brandish flaming torches and scream horrifying curses. Their presence has buoyed the British defenders, whipping them into a frenzy of boasting and roaring. As the first Roman boats slide to a stop in the soft sand, the British clash their weapons against their shields, whoop and holler, and the shrill blare of their carnyces echoes among the trees.

Illustrated by Edouard A. Groult 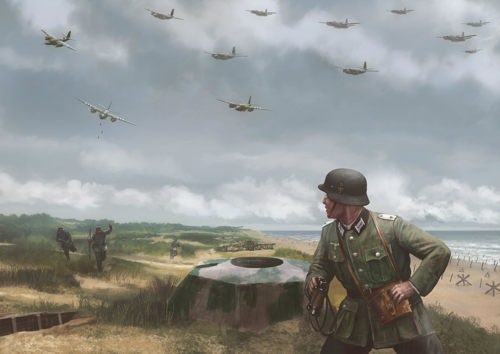 The most accurate bombing in Normandy on June 6th took place on Utah Beach, carried out by the Ninth Air Force’s IX Bomber Command. Three hundred B-26 medium bombers attacked three groups of German defensive positions along a several-mile stretch of open beach, defended by the 919th Grenadier Regiment, 709th Infantry Division. Here, Lieutenant Arthur Jahnke, a platoon leader in the 3rd Company, commanded Widerstandsnest 5. A little before 0600hrs, Jahnke stood on a sand berm and, looking to the north, saw a wave of twin-engine bombers coming in from the sea. Usually, he watched bombers continue inland, but instead the lead formation of nine aircraft turned left and flew up the beach straight toward his position. This illustration captures when Jahnke, an experienced and decorated officer, realizes his platoon is the objective for this flight of bombers. They are flying low, and he has just watched as the bomb doors open and 250lb bombs begin tumbling towards his defensive positions. Moments later, he was on the ground as the first wave of aircraft hit his nearby bunkers. The bombs shattered a nearby wagon, and sand and debris almost buried the young officer alive. He managed to find protection from the onslaught behind a concrete wall. He then watched as bombs hit his munitions bunker, causing a massive explosion. For a moment, he had a chance to evaluate the damage. Everything not protected by concrete was gone. The accurate bombing damaged artillery pieces, buried the rifle pits, and destroyed two munitions bunkers. Bombs hit all of the bunkers but failed to penetrate. His casualties, as a result, were light. Jahnke and his platoon would do the best they could to defend against the US 8th Infantry Regiment that would land in front of his damaged defenses. Within two hours, overwhelming American power secured the complex, and Jahnke was preparing to board a landing craft on his way to a prisoner of war camp. 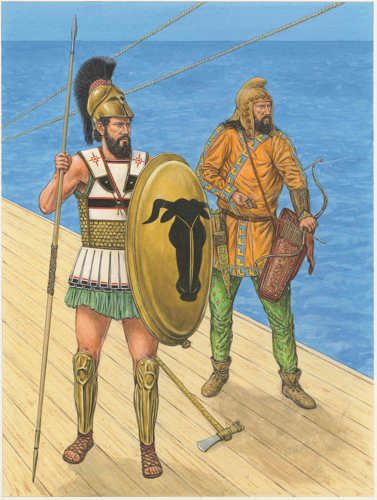 The final piece of artwork in our reveal shows the armour worn by a Greek citizen hoplite and a Scythian mercenary archer and their weapons.