Last month we announced Imperium: Horizons, the exciting new instalment in our hit civilisation-builder series. Before release next year we've got a whole lot of content planned to keep you busy - including reveals for the game's eight still unannounced civilisations! But first we have a peek behind the scenes at what made it all possible. Read on to hear from designer Dávid Turczi and one of the game's playtesters about the in-depth process that helped make Horizons everything it is...

"Welcome to the playtest! We’ve got hopefully fun, and definitely games.

Like for every designer, playtesting is part of my everyday job: gathering people who are enthusiastic enough to repeatedly play a game that might be good, be analytical and articulate enough to volunteer any problems that they see arising, and be good enough at the game (and at learning new stuff for the games) to be able to notice sources of unfun that I myself wouldn’t be able to.

Usually this will involve having to train my friends (local and remote) to play the game, build prototypes from scratch (in the case of a base game), or find someone who also owns the base game (in the case of an expansion).

When designing a sequel/expansion to a quite successful game, playtesting is absolute heaven: I just stand somewhere online (BGG or Facebook) and shout loudly: “I have more content for this game. Do you want to try it out?” Then (usually), 50 people will reply, 20 of those will follow your instructions on how to set up the playtest, 10 of those will play the game once, and five of those people will hang around afterwards and play the game more. If you treat them well and the game keeps engaging them, those five people will stay with you and play and play and play. 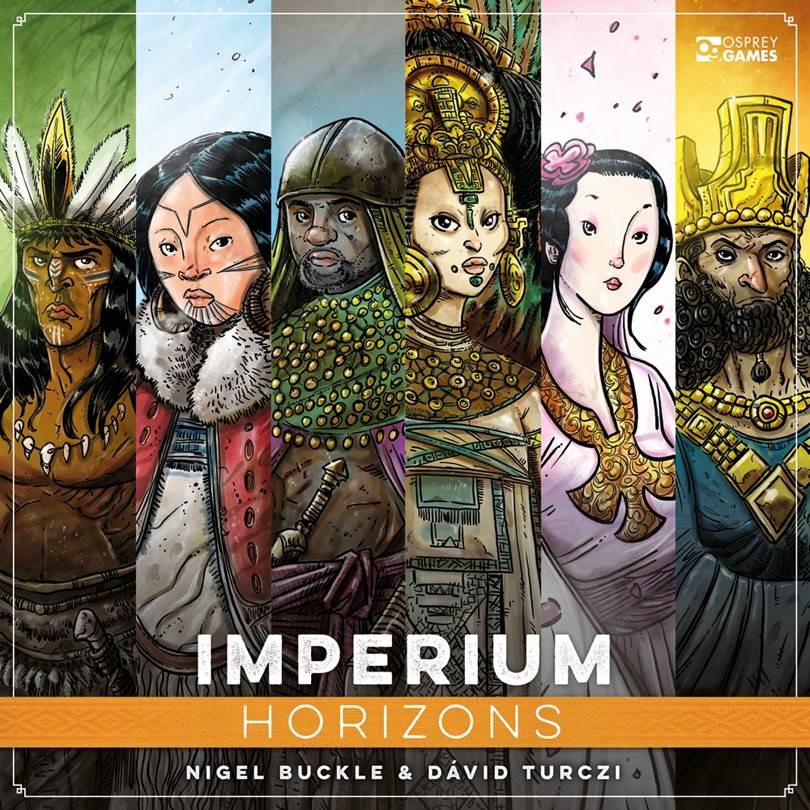 Nigel and I started working on Imperium: Horizons a little over a year and a half ago and, by autumn of 2021, I was authorised to whisper the news online. Well, at the time of me writing this article in late August we have over 650 logged plays in our online database, with one of our players logging a hundred two player games and a few dozen solo. I could tell you how much this wealth of data helped us, allowing us to fine tune every deck and every bot far beyond what we could achieve before (including returning to some of the existing decks) -- or I could just let one of our lead testers take the microphone from me. Please welcome Joshua Potter. Josh, take it away!" 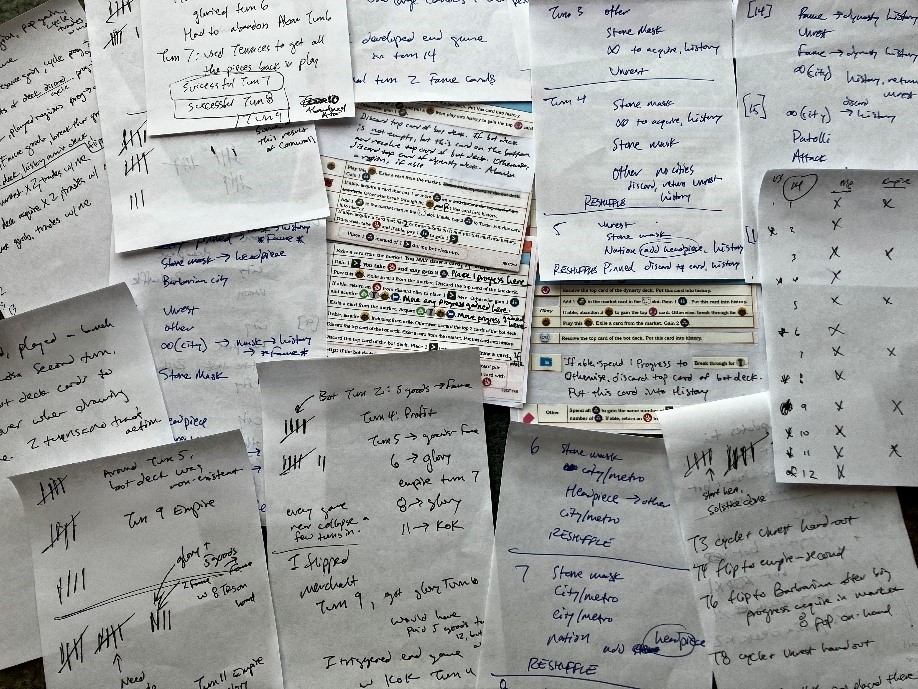 I signed up for a dozen test games of Imperium: Horizons.
It was so good, I ended up playing 150 instead.

I remember reading the first spotlight blogs for the Carthaginians and Egyptians on BGG in early February 2021 and being completely enthralled by the idea of Imperium. I was drawn in by the artwork, the historical detail, and the crunchy nuance of its unique approach to deckbuilding. And, as a solo player, when I read that each civilization would be represented by a different automated opponent, I got very, very excited. I pre-ordered it, I upgraded its components, sleeved the cards, retrofitted the Legends box to house both sets in one place, and then played it about 70 times during the first year I owned it. Come the end of 2021, I would put it head-and-shoulders above the rest of my board game collection, my favorite game of all time, the one game that I wanted to play more the more I played it. To me, Imperium was a box that contained a world: it was immense, intriguing, imaginative, and cool as hell.

I say all this in service of the following point: the world of Imperium is about to get blown wide open with its new standalone expansion, Horizons, and it is time for fans of the original game to get very, very excited all over again. 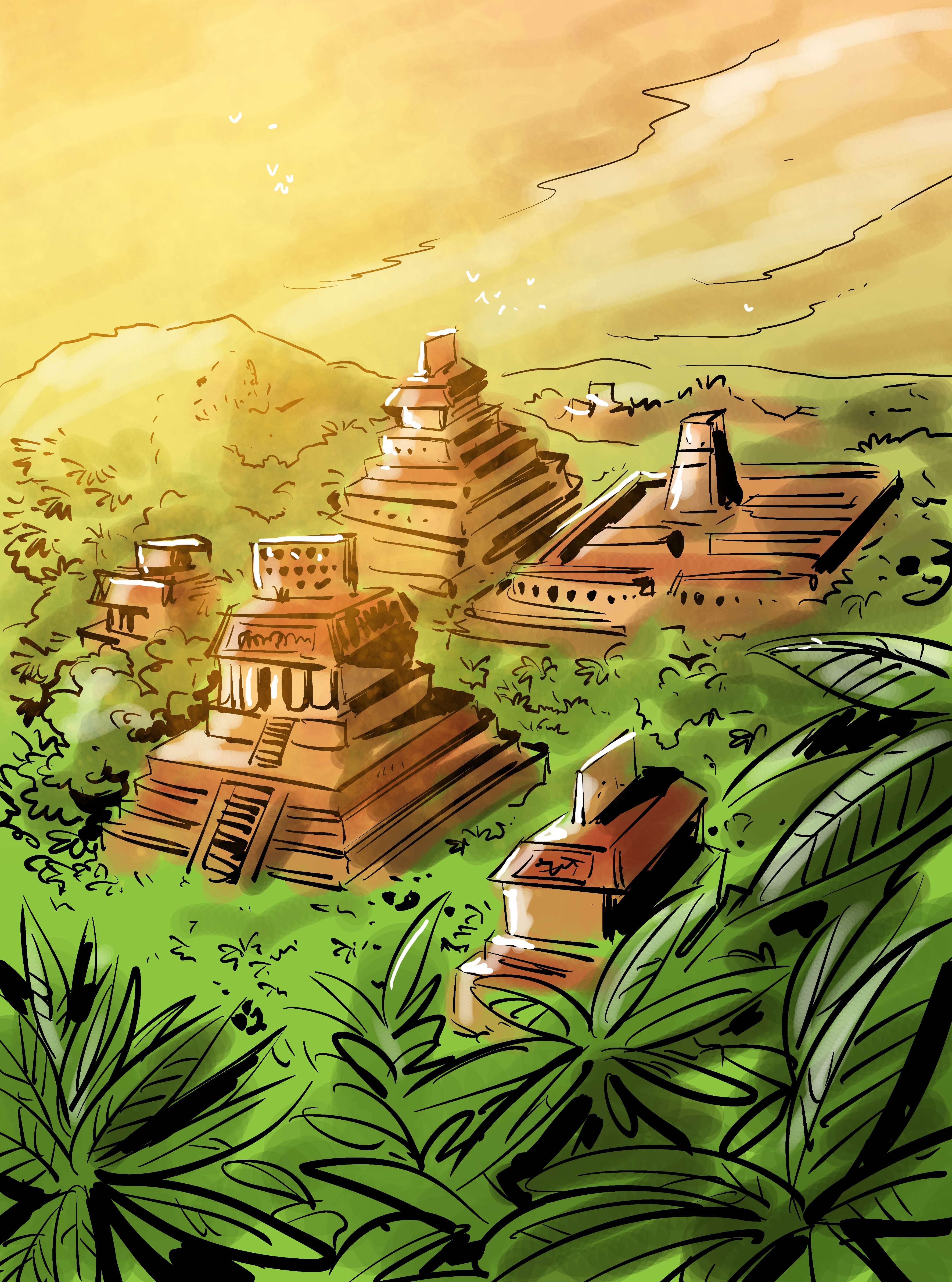 I originally answered an unassuming call on BGG in April looking for solo playtesters for a new Imperium product. I believe Dávid was asking volunteers to play something like “one or two dozen games” against a few of the in-progress bots. I had never helped playtest a board game before, and I expected it to be a fun week-long side project. What ended up happening instead was this: the expansion was so good, the discussions around the game between its designers, developers, and playtesters so engaging, the process of refining and balancing the individual civilizations so perplexing, meticulous, and rewarding – that come the beginning of August (!) I’d logged more than 150 games. That’s right: 150 games. And you know what? Even now as I sit here and write this, I think I’d still rather be playing Imperium.

Without giving much of the substance of Horizons away, I want to describe what the playtesting process was like, because I think it illustrates the careful, creative approach Nigel and Dávid bring to the design process – at all points ensuring that explosively awesome ideas are scrutinized from several angles, including theme, balance, mechanics, and substantive fit to the historical cultures represented in the game. The playtesting process was highly iterative, drawing on both theoretical discussions of design as well as the practical experiences of the players themselves, and it mixed the sensibilities of both high-level strategic masters (like one of the game’s developers, Neo Teng Whay) and everyman Imperium enthusiasts (like myself). And did I mention that Mark Hutchinson, the expansion’s testing engineer, developed a computerized simulation tool that we used to generate literally millions of simulated bot games? Yeah, it was a lot. And all of it was awesome. 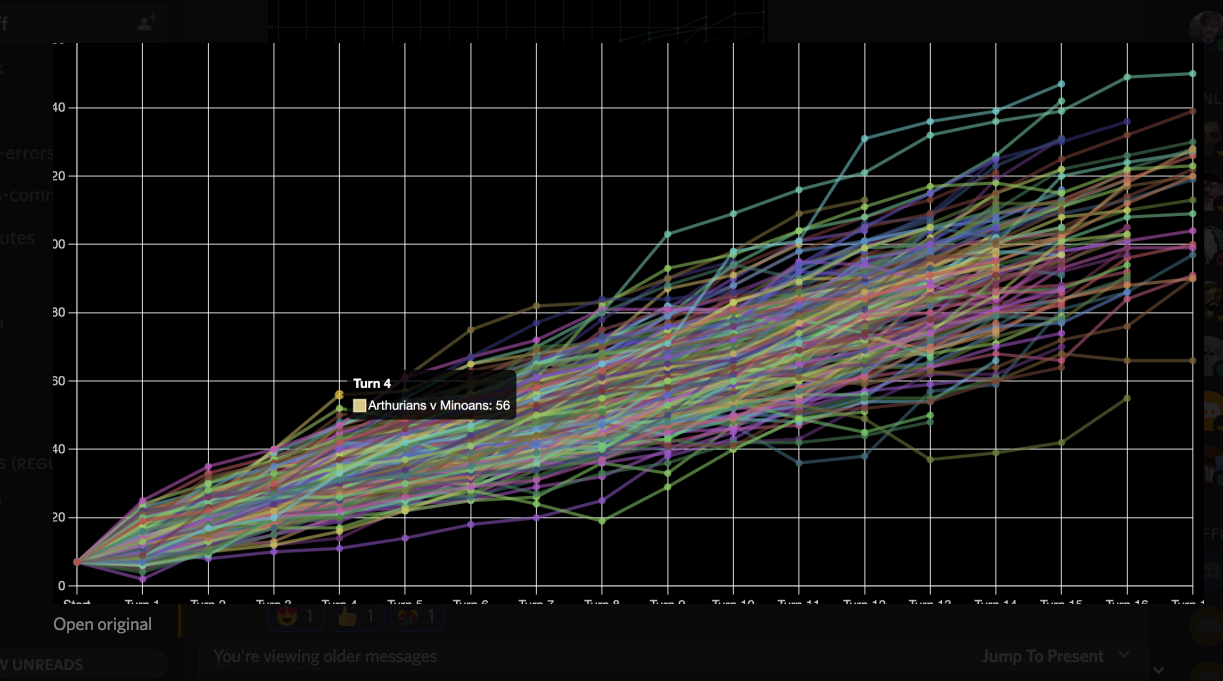 Some of the results from our extensive bot simulations.

My first steps into the process were small. One stream of playtesting was focused on tweaking a few bots from Classics and Legends that the community had found were either too weak (Scythians) or too strong (Atlanteans). I played a few games against one of these bots and described what I thought was making it weak to Dávid, who then promptly made an edit to that bot’s chart and asked me if I thought the edit would fix the problem. In all seriousness, I couldn’t believe it. I remember thinking: “wait, Dávid Turczi just changed Imperium because of something I said!?” (Granted, the change was miniscule, but still.) It was as if I’d been invited into the writers’ room of my favorite television show while they were working on the series finale. I was hooked.

At another point in the process, I spent a couple of weeks playing several games with a new civilization and its bot counterpart. The playtesters had made a number of changes to the bot’s chart and the civilization’s underlying kit, and it was feeling like things were in good shape. But there was one development card that seemed underwhelming, and I remember writing to Nigel and asking whether it might be worth creating a different card that would draw on this particular civilization’s natural synergies between population and Fame? He and I spent one morning reading about the history of shrine temples within this civilization, and he designed a card with a new mechanic based on what we were reading. This is my favorite card in Imperium: Horizons, a perfect late-game summation of all the dynamics that make that particular deck really click.

This also illustrates one of the best parts of Imperium, which you’ll find alive and well in this new standalone expansion: the marriage between theme and mechanics. Nigel and Dávid are caretakers of theme, emphasizing its importance with playtesters, discarding otherwise interesting mechanics that did not fit for thematic reasons, and consulting intensively with outside cultural experts to ensure that the ways in which these civilizations are represented in the game are respectful and accurate. It is a good thing that the design space of Imperium is so broad that it allows for the inclusion of so many unique cultural characteristics. Indeed, some of the new decks in Horizons pose answers to questions like: how would you represent a civilization that had spent millennia adapting to the boom-and-bust cycles of brief summers and harsh winters? How could you embody the dynamics of civilization on the move, which made lengthy, dangerous voyages to unfamiliar lands? Could the design space of Imperium support a civilization more aggressive than the Celts? A civilization hungrier for fame than the Romans? Wealthier than the Minoans?

You are going to love the answers. 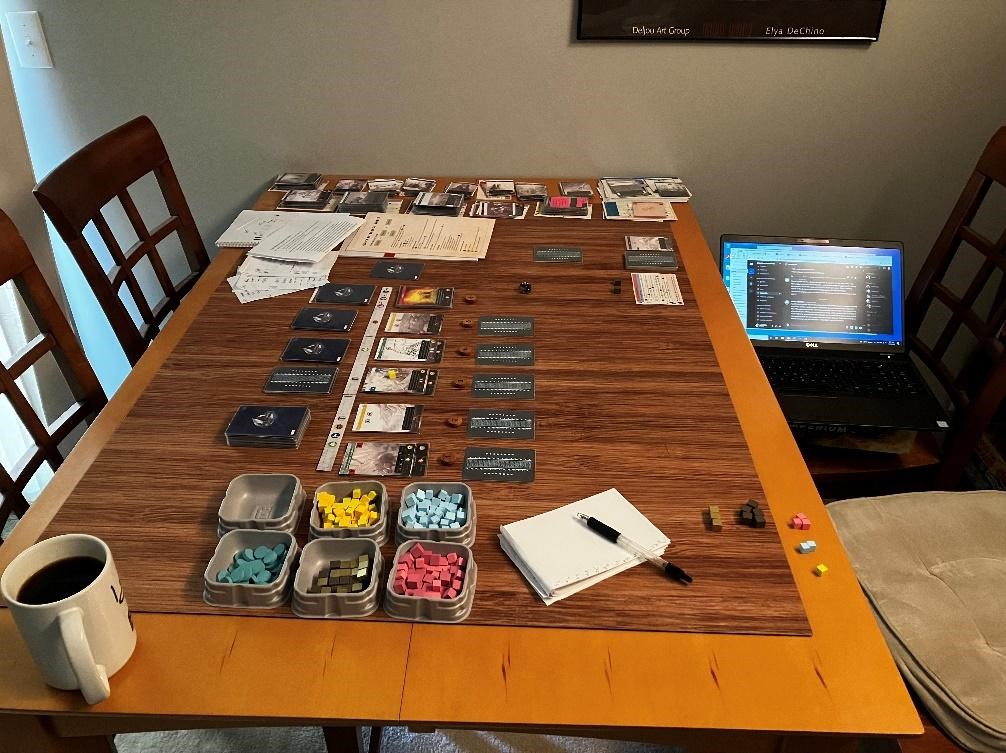 My board gaming table, which turned into an Imperium: Horizons testing lab. I printed off the cards for each civilization (usually multiple times as the kits developed) and sleeved with old cards from other (lesser!) games.

Throughout the months of rigorous playtesting, we juggled four types of development:

(1) Each civilization’s deck or “kit” – Was it fun? Was it balanced? Did it do justice to the culture being represented?

(2) Each civilization’s corresponding solo bot – Was it an accurate reflection of the deck itself? Did it give the human player a challenging play experience?

(3) A unified rule set for all three Imperium boxes – There was a lot of rewriting, clarifying, and cross-checking against Nigel’s BGG rules verdicts, all led by our in-house rules expert, Simon Strange.

(4) The integration between pieces of Horizons, Classics and Legends – Did any old cards need to be patched? Did the new civilizations behave well alongside older ones? Did any older civs need to be updated in light of new mechanics?

All of these discussions took place alongside one another, informing, adapting and responding to each other in real-time. The group routinely navigated cascading series of changes (“Oh, if we change this, that means we need to tweak this other thing, update the bot, clarify the rulebook, and reprint a card in Classics”) and we’d endlessly rinse-and-repeat playtests just to ensure that something hadn’t broken as a result. The resulting product is finely honed, built with love, and meticulously inspected to ensure an immersive, exciting, and infinitely replayable experience (as if replayability was ever Imperium’s problem!) 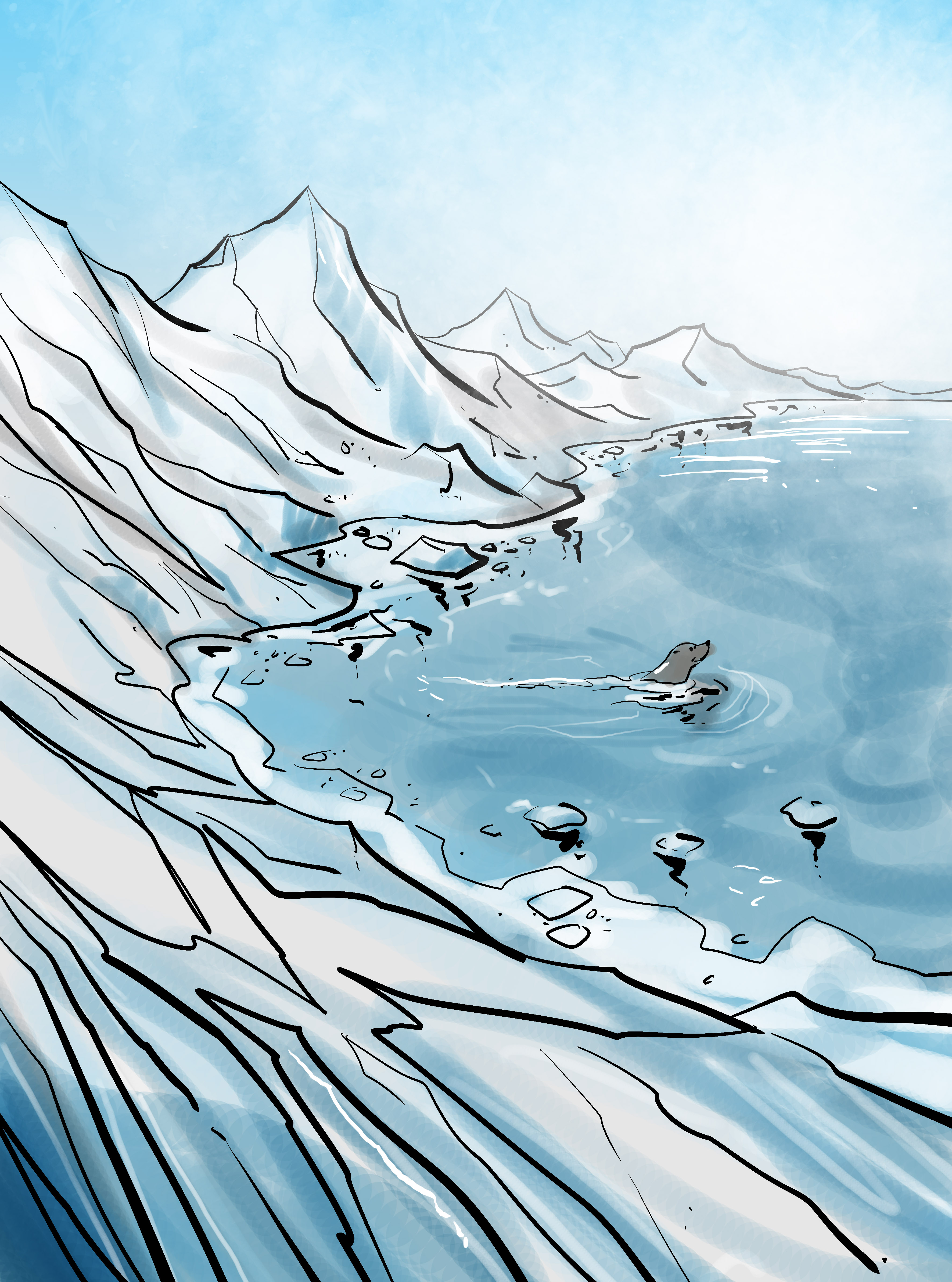 I know that Nigel and Dávid will have a good deal more to say about Horizons in the months to come, so I’ll resist the urge to share much more. But I did want to end with one final observation: Horizons is one of those rare board game expansions that manages to both improve the core experience and extend it in wildly imaginative directions. It’s not just that there are new civilizations to try (there are, of course, and they are mind-blowing), but there are now new ways of playing the civilizations with which you’re already familiar. I remember testing some of the old Classics civilizations with the new components from Horizons and thinking: “Wow, there’s a completely different way of playing some of these decks that I’d never even considered before.” Somehow, Horizons manages to open all the windows of the house built by Classics and Legends, air it out, and let in the sunshine. It’s a wonder.

And for all you solo gamers out there: hell, at this point, I don’t even know why I own other board games. I guess they look nice sitting on the shelf, but …

Six civilisations have already been unveiled. Keep an eye on the Osprey Games Blog in the coming months, as we reveal the eight remaining unique civilisations that Imperium: Horizons has on offer. And, if Josh’s clues have got you guessing, check out David’s forum thread speculating about what they could be.