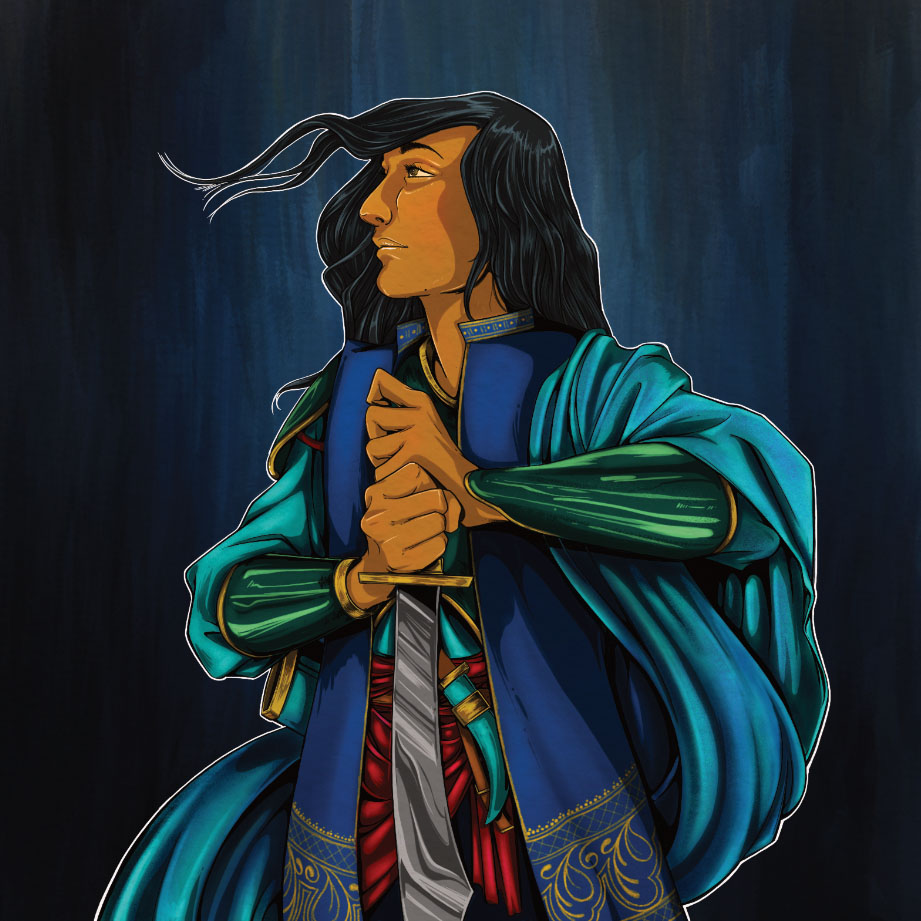 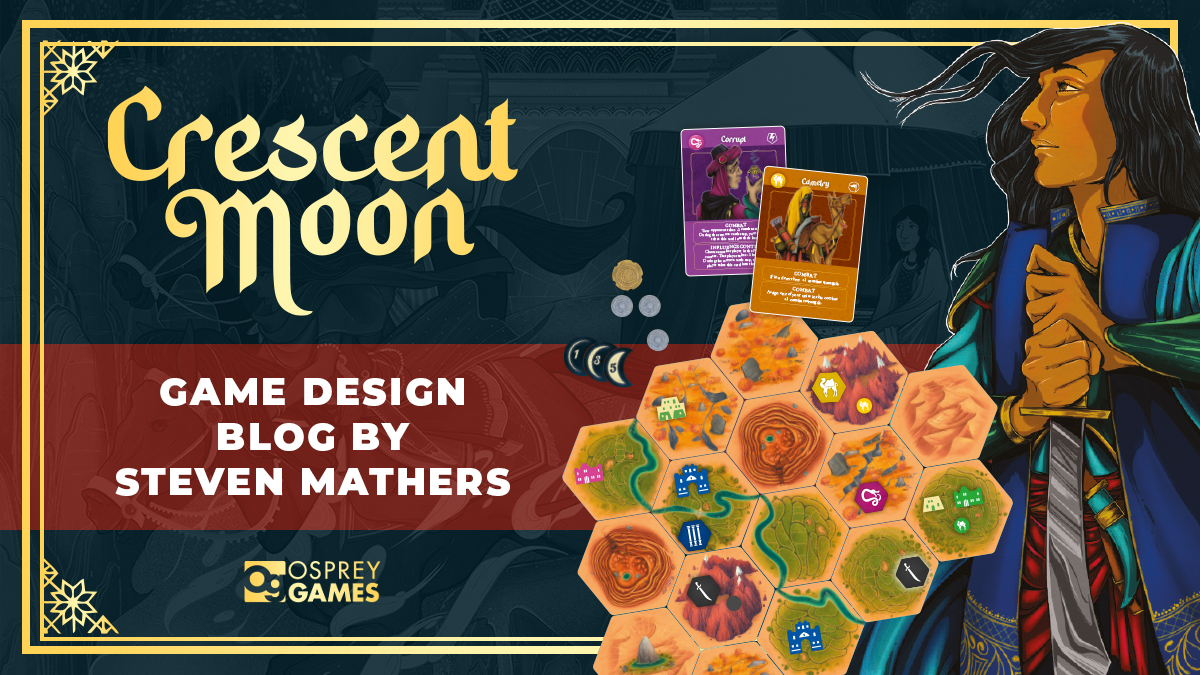 Crescent Moon is out now! Still want to find out a little more? Read what the designer Steve Mathers has to say about what what makes his game tick ...

One thing I don't particularly like is dice-based combat. I get that some people don’t mind it, and it does bring a certain ‘YEAH, I rolled well and CRUSHED!’ feeling, but on the other hand the feeling that you get from playing well in the planning and execution stage to produce what should be a good outcome from you, only to have unlucky dice rolls take your reward away? That's not great. Sometimes in these types of games there are only 5 or 6 really crucial battles — not enough for dice to statistically even the playing field – so someone generally walks away from the table having done better or worse than they deserved.  (Where dice really shine is in games that feature numerous conflicts where the cumulative effect is more important than an individual battle, but that is not Crescent Moon.)

I definitely wanted a battle outcome to be uncertain. Deterministic battles encourage a kind of arms race where, knowing that they aren’t winning an attack, a player adds more resources to their position, which then just results in their opponent doing the math and adding more resources of their own. It’s static and frustrating for both parties. Uncertainty breaks the spell of determinism. And it also gives the exhilaration of victory or the theatre of defeat when the unknown outcome is resolved.

However uncertainty doesn't necessarily mean randomness. Crescent Moon uses card-based combat where players can buy cards that produce various effects and turn the result of a battle. Players with large armies can also choose to secretly commit units to die to produce better combat results. Early in the game people can generally keep track of which cards people are holding and have played or not, but as the game progresses to the crucial later stages, invariably people lose track of who is holding what. Battle outcomes become uncertain. In addition, the Murshid faction can also involve itself in the battles of other players if they occur close to Murshid influence, bringing another dimension of uncertainty and politics to combat.

When a battle is started, all involved parties secretly select cards from their hand to play, and then simultaneously reveal them. Many cards are reusable once per round, so there is a resource management aspect to these decisions. If combat occurs early in a round, do I play all my cards now, or risk saving some for potential later battles? Of the units cards, there are some that have an OK effect and are useful in most battles and some that have a great effect but are more situational - for example ‘camelry’ is a unit card that performs excellently in desert areas – so again you have to consider carefully when to use them. There are also some unit cards that allow the faction to escape casualties, allowing bluffing about whether a faction is truly committing to win a battle, or perhaps just feinting to cause an opponent to waste resources.

The result is combat that is rich in nuance, decision-making and theatre, and not left to random chance. 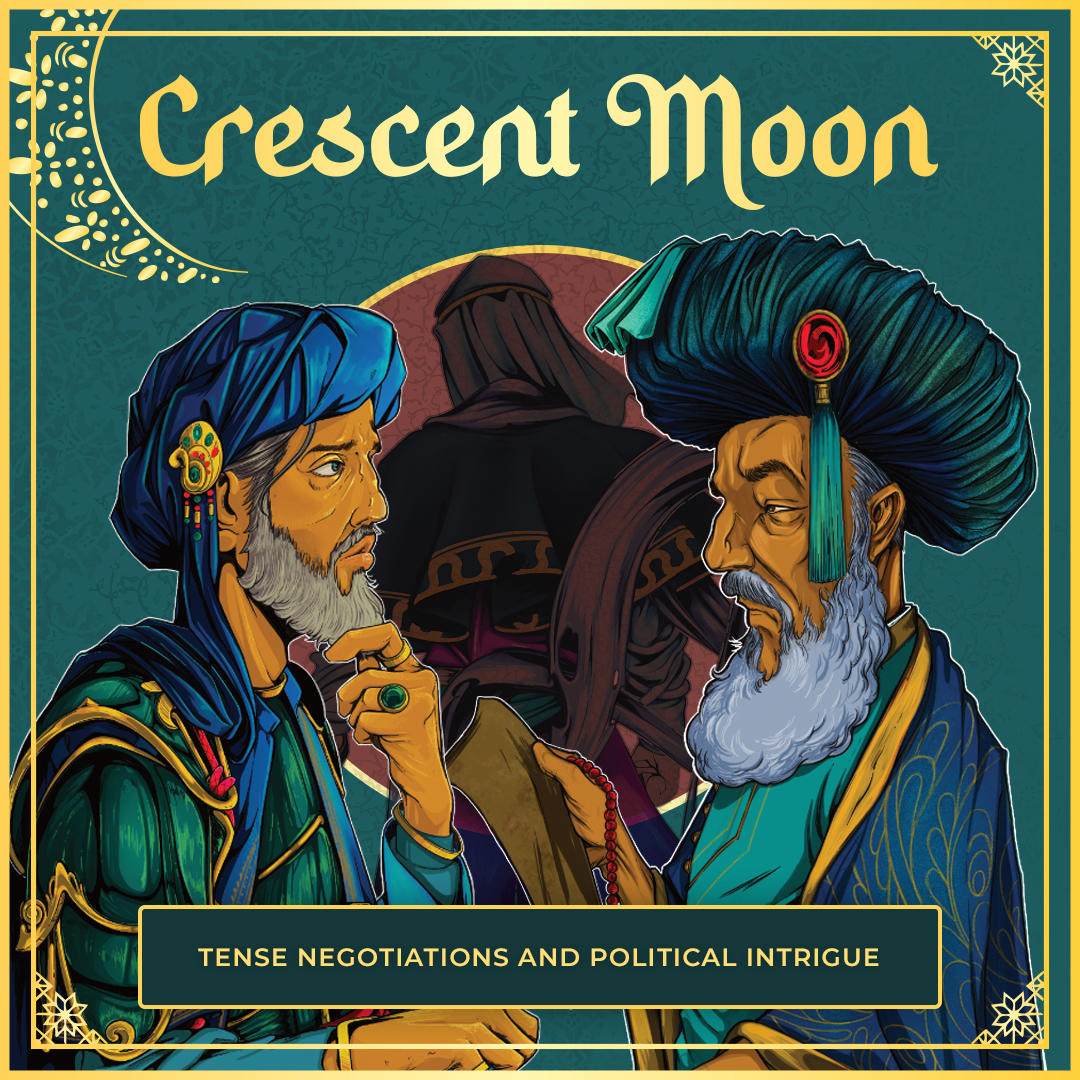 Crescent Moon is in some ways a demanding game of its players.  Negotiation is critical to success and the overall experience.  But you can’t really make a rule that says a player MUST negotiate. Well, you can, but that is taking things to the extreme.

The game Diplomacy is all about negotiation. By design it’s a zero-sum setup where nobody can advance unless at someone else's expense, and then only with the help of one or more other players to force the issue. Without alliances, nothing can happen. It’s the polar opposite of the style of game where players can tend to their own position/engine/knitting and advance independently of what other players are doing.

The criticism of Diplomacy is that it’s kind of predictable. In every game, players make promises to each other, and inevitably at some point those promises must be broken for a player to actually win. There is no way to win in Diplomacy other than being the biggest and best liar, and in every game, every player is in exactly the same position - be the best liar at a table full of liars. In many ways it reminds me of a super-sized version of 'social deduction' games where everybody is always the Duke and definitely not a werewolf.

Crescent Moon has been designed to provide a very high level of interactivity, both on the board and in negotiation, while avoiding being predictable. In area control games it is often advantageous to promise and betray - that comes with the territory (literally). But in Crescent Moon, while it is very hard to win without at least some negotiation, it is not required to always negotiate in bad faith. Because each faction has different ways of scoring points, it is not a zero-sum game. Faction positions can co-exist and overlap on the board. Players can make mutually beneficial agreements that don't inevitably end in betrayal.

There are a few natural alliances in the game - up to a point. The obvious one is the Sultan and the Caliph who are the two factions most heavily invested in maintaining infrastructure. The other natural alliance is not so obvious, but it is the Warlord and Murshid, as they both have a hard time hurting each other anyway, and the Murshid is the one faction that can benefit from the destruction the Warlord wreaks. The Nomad, as befitting their independent status, don’t really favour any of their opponents, and maintaining the status quo is probably their best bet, as it maximises the value of their own bargaining chip - their mercenaries.

The best experience of Crescent Moon will be a game full of hard-nosed, but good-natured negotiations comprising all manner of threats, bribes and compromises, but to get that, players will have to actively engage with each other at the table.  And of course, the nature of the negotiations - to coexist or go it alone, to build solid alliances or betray – is all highly situational and will change from game to game.

Crescent Moon is out now! Buy your copy today.