On the blog today, author Peter E. Davies takes us through the development and origins of the B-36 during WWII for his recent title B-36 ‘Peacemaker’ Units of the Cold War 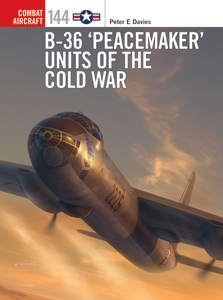 As an 11 years old at my local school I vividly recall standing in the playground as the air was gradually filled with a low, all-embracing hum. It silenced the chatter and made the tennis-ball kickers stare at the sky, seeking the source of this unfamiliar hypnotic vibration. Amid cries of ‘Aliens from space!’ (the then-current fear) a junior expert called out: ‘No, it’s the Bristol Brabazon!’, unaware that the British leviathan had been converted to many saucepans two years previously. Through broken cloud the distant B-36 Peacemaker, with sunlight occasionally glinting from its massive wings, made its ponderous way out of our vision, although the subsonic sound lingered on and on.

Convair’s B-36 was, above all, an impressive technical achievement. My schoolmates were not alone in being overawed by its size and sound. The largest bomber ever to have served with the USAF still rates numerous superlatives over sixty years after the last example flew. With an unmatched 86,000lbs bomb load, an unrefuelled range greater than the current B-2A Spirit’s and a 230ft wingspan (the same as the Brabazon’s) the Convair B-36 earned its unofficial name ‘Peacemaker’ by maintaining America’s nuclear deterrent throughout a long Cold War period, during which Soviet defences gradually developed the means to resist its power.

It was the shock of the Japanese attack on Pearl Harbor that persuaded the US War Department to expedite the development of an aircraft with far greater range and payload than the USAAF’s standard B-24 or B-17 heavy bombers. Its origins coincided with the building of the mile-long Government Plant 4, at Fort Worth, Texas in April 1941 on the understanding that the factory (the biggest aircraft construction site ever built) could be suitable for the manufacture of an intercontinental bomber with a range of 10,000 miles, a wingspan of 195ft and an unprecedented weight of 200,000lbs, four times that of a loaded B-24. Its development was delayed in a wartime situation where mass production of established types like the B-24 at Plant 4 was vital. However, the B-36 might have been ready to attack Japan from Hawaii, or the more distant parts of Germany in 1944 had it been prioritized in 1941.

The B-36 concept had some contemporary parallels including Hitler’s ‘Amerika bomber’, conceived in 1940 to fulfil his vision of bombing New York if America was drawn into World War II. The four-engine Me 264 and the six-engine Junkers Ju 390, with a 165ft wingspan, were intended to make the 7,200 miles round trip from Europe via the Azores with light bomb loads. They reached prototype form only. The enormous dimensions of the B-36 were decided by two main factors: the need to fly for 10,000 miles at a time when in-flight refuelling had not become available, and the requirement to carry 10,000lbs of conventional bombs or a 43,000lbs blockbuster, or a single ‘Fat Man’(an early nuclear bomb 10ft long and 5ft in diameter weighing 10,800lbs). The even larger 15.25ft-long Mk 7 nuclear weapon would not fit any other bomber including Strategic Air Command’s front line Boeing B-50. The advent of the hydrogen bomb required the B-36, as the only candidate, to carry the 42,000lbs Mk 17 weapon which was almost 25ft long. Bomb-aiming in the production B-36B was via an APQ-24 radar system that could ‘see’ 200 miles ahead of the bomber, although the wartime Norden site was also retained as a reliable back-up.

These performance parameters demanded unprecedented quantities of fuel: ten times the capacity of a Boeing B-17 in the B-36’s case. Six of the most powerful reciprocating engines then available were needed. The R4360 Wasp Major was the only viable contender and each 3,500hp engine drove a propeller 19ft in diameter. Their unconventional housing in the rear of the wing was designed to improve airflow over the wing, but it was to cause persistent problems with engine cooling leading to numerous fires. By 1949 the bomber’s cruising speed of around 300mph made it more vulnerable to the improved Soviet fighter types, which would soon include operational jets. It was therefore decided to boost the bomber’s performance for take-off and flight over a target area by adding four, podded J47 jet engines, running on the same fuel as the main piston powerplants. Each jet unit was the same as the power source for an F-86 Sabre fighter and the quartet increased the maximum speed to around 450mph and added up to 40,000lbs of the maximum take-off weight as well as improving the bomber’s performance at 40,000ft altitude.

The giant aircraft’s unveiling in 1946 led to numerous amazing revelations about its size and complexity. Two things that particularly impressed the public were the main undercarriage and the ‘tunnel’. A bomber weighing over 400,000lbs needed a suitably massive undercarriage, but in the 1940s bombers still had single-wheel landing gears. For the prototype B-36 each Goodyear tyre was 110 inches in diameter, weighed close to 1,500lbs and required several days’ work for a tyre change that was managed with a wrench 4ft in length. Each main landing gear unit weighed more than a P-51 Mustang fighter. A more practical multi-wheel unit was devised for later B-36 versions, partly because the enormous pressure exerted by a single-wheel unit meant that only three runways in the world could bear the weight of a B-36A. A tank-tracked landing gear unit was tested but it produced an intolerable screeching sound in use.

The ‘tunnel’ was actually adapted from the method used in the B-29 Superfortress to connect the front and rear pressurized sections of the fuselage for access by up to sixteen crew members. The galley, toilet and rest areas were in the rear section. In the B-36 the connecting tube was 80ft long but only 2ft wide. Crew men who braved the journey had to lie on a small skateboard-like truck, wearing a parachute pack, and pull themselves along a track using an overhead rope. Obliging pilots would make the bomber climb or dive slightly as appropriate to speed up the journey a little.

Other sources of public wonderment were the 27 miles of electrical wiring and the fact that crew men could stand up in the 7ft-deep wing root and use a crawl-way that gave access to all the engines for some in-flight maintenance tasks. One of the most complex aspects of the structure was the highly sophisticated self-defence system. Following the ‘Flying Fortress’ bomber design philosophy of the day, the B-36 bristled with guns.  Early versions had sixteen 20mm guns, paired in retractable turrets occupied by eight gunners or guided with an APG-3 radar in the case of the two tail guns. The turrets were aimed remotely with complex visual controls set in Perspex bubbles. As weight and performance demands increased with subsequent B-36 versions the guns were gradually eliminated in ironically dubbed ‘Featherweight’ B-36 versions. It was realised that guns would have been of little use against the high-speed jet fighters with air-to-air missiles that were developed during the 1950s, and the experience of B-29 gunners against MiG-15s over Korea emphasised that other means of self-defence were needed.

This eventually led to experiments with ‘parasite’ F-84 fighters attached to the B-36’s wingtips or carried in the bomb-bay to be launched when needed to fight off enemy interceptors and return to the B-36 afterwards. In other tests FICON RF-84F reconnaissance fighters were carried in a similar way to fly ahead of the B-36 and make high-speed reconnaissance or tactical weapons delivery runs over enemy targets. The complexity and dangers of these operations led to their early abandonment, but they did presage the drone-based, force multiplier projects of more recent times.

From its inception onwards, the B-36 was regularly threatened with cancellation. It was central to the battle between General Curtis LeMay’s Strategic Air Command and the US Navy for control of the American nuclear deterrent for several years. Despite demands from influential congressmen and accusations such as those of Adm. Arthur Radford that the aircraft was a ‘billion-dollar blunder’ and ‘a 1941 airplane’, production of 61 B-36As was agreed in May 1948. A series of record-breaking endurance flights and demonstrations of the B-36’s prodigious bomb delivery capability were impressive and the onset of the Korean War increased defence spending for both USAF and US Navy.  Carswell AFB, adjacent to the Convair Fort Worth factory, became the home of the first B-36A/B wings, the 7th Bomb Wing.

Eventually, 11 wings would fly bomber and reconnaissance versions of the aircraft, deploying to bases across the world and demonstrating SAC’s ‘global reach’ to any potential aggressors. Regular deployments were made to UK bases like Lakenheath and Upper Heyford and B-36s operated from the heat of Guam and the glacial temperatures of Alaska. They starred in a major Hollywood film with James Stewart and the design became the basis of the world’s largest transport aircraft, the Convair XC-99, although only one was built. The B-36’s service life was a mixture of triumphs and tragedies. Its global reach missions were scheduled to take at least 24 hours, although many were far longer, and they often took place in the worst of weather to show SAC’s new all-weather capability. However, there were unwelcome world news headlines from ‘Broken Arrow’ incidents in which lost atomic weapons were involved in B-36 crashes. The Texas tornado, in which the forces of nature rather than Soviet defences effectively wiped out SAC’s main deterrent at Carswell in ten minutes, also brought unwanted publicity. Originally, 96 B-36s were as reported damaged beyond repair by 125mph winds and 106 in all were taken out of service. However, a massive and costly repair effort returned all but one to service.

RB-36 reconnaissance variants flew valuable missions along the borders of potentially hostile states, bringing the world’s most sophisticated camera and radar gear to bear on strategic targets. B-36s took part in atomic weapons tests which sometimes left their airframes so radioactive that they could not be touched for months. By 1956 the B-36 was being overshadowed by the far higher performance of its SAC successor, the Boeing B-52. Its relatively low speed and the advent of fighters that could reach its 40,000+ft operating altitude forced it, like other aircraft to fly its penetration missions at low altitude where it became a huge target at 500ft for anti-aircraft fire. Its massive structure was ill-suited to such punishing flight conditions and crews increasingly regarded their planned nuclear or conventional bombing missions as one-way trips. Early versions were phased out in 1956 and in February 1959 the last aircraft built, a B-36J, was finally grounded. Since then, bombers have become smaller, smarter, much faster and far less easy to see on radar. However, that mighty sound somehow lingers on….