On the blog today, Charles D. Melson, author of the upcoming Campaign title, Vietnam 1972: Quang Tri shares how this title came about. 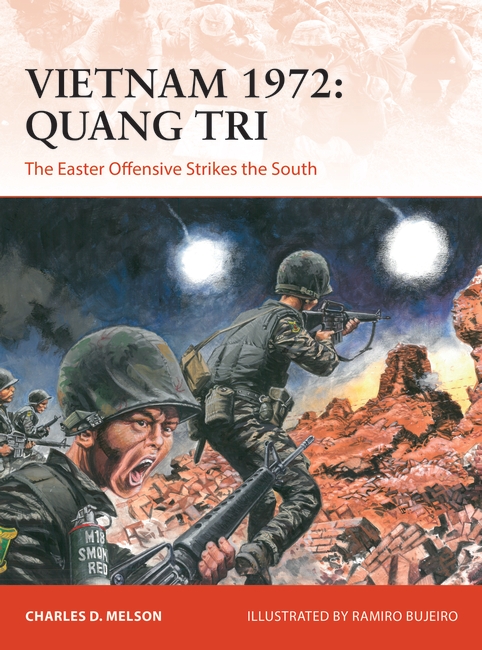 My comments are those not found in the published text. By this I mean the back-story of the “who, what, when, and where” of the events and the campaign narrative. I will start by saying I have always been a fan of the way Osprey integrates words, graphics, and photographs to tell an accurate and interesting story. This example depends upon the actions of the Spring or Easter Offensive providing a tale in a riveting fashion. Not only is there a war of movement going on, there are also antagonists and protagonists of consequence. The North and South Vietnamese proved implacable foes at the conventional level.

To start at the beginning, some 50 years ago I served with Vietnamese Marines in both the United States and Vietnam (but not as an advisor). This was as a student in military schools and as a very junior staff officer with the American 9th Marine Brigade in support of the Vietnamese Marine Division (as an operations representative with the tactical-logistics cell during the combat landings). At the time, the example of these Marines and their advisors was impressive and resonated for a long time thereafter with other service experiences.

The emotional impact of a ceasefire in 1973 was followed by the dramatic images of defeat in 1975. The loss and recapture of Quang Tri City became a thing of the past except in memory. Some 10 years later, I found myself in another staff position that allowed me to do something about this. As a headquarters action officer, I was assigned to do a history of the U.S. Marine Corps in Vietnam for the 1971–73 period. As a result, I was able to have the advantage of telling a good story from official records and interviews of the participants. This project had languished, as it was late in the Vietnam War and major commands had departed. However, the period was no less interesting and worthy of documentation. A number of others had collected material, but little writing had been accomplished because of limited resources and other demands. The work was completed in 1991, but the advisory effort with the Vietnamese Marines was only part of an integrated story. The brigadier-general in charge of the History and Museums Division said, “The Vietnamese Marines will have to tell their own story.”

Through the American and Vietnamese Marine reunion associations, I continued to follow the story and contributed to the historiography that developed regarding various contentious issues. Later, as the Chief Historian of the Marine Corps, I worked for Colonel John Ripley of Dong Ha fame. This allowed further contacts with the participants who were now getting long in the tooth, but still impressive. With the 50th anniversary of the Vietnam War being recognized as a Department of Defense activity, I proposed a commemorative work to the Marine Corps Heritage Foundation to revisit the events with a focus on the Marines and advisors. This was preceded by a paper at the 2017 Naval History Symposium and a 2015 article in Marine Corps History. With photographs, maps, and narrative in hand, in 2019 Osprey took an interest and felt it would work as a campaign volume. Editor Nikolai Bogdanovic took charge and helped create the resulting product in its final form.

The narrative accomplished two things: telling the origins and development of the Vietnamese Marines (1954–1975), and their relationship with the U.S. Marine Advisory Unit over this same time period (1955–73). This provided the necessary background to the focus of the campaign: the 1972 Spring or Easter Offensive south of the Demilitarized Zone. While most histories focus on the initial landing and build-up of American forces, the impact of the 1968 Tet campaign, and the defeat and evacuation in 1975, this was the critical period with an attempted conventional attack along three fronts. The fighting was in the air, on the land, and at sea in a manner not seen since the Korean War.

While a majority of U.S. Marine Vietnam records had been sent to the National Archives, the History Division had retained some of those for the Vietnamese Marine Corps and advisors. These provided the basis for the authoritative text. Imagery was a challenge, as there was no centralized collection of Vietnamese Marine Corps material to go to, and my work from 1991 had long since been disbursed in various archival shifts. However, enough were found to enhance the work, including those by known war photographer David Burnett. The issue of artwork came up early and Nikolai engaged the services of Ramiro Bujeiro to provide talented results. The technical details of uniforms and equipment were recreated. As human interest incidents were selected, his graphic style caught the spirit of fleeting moments in time. Finally, maps and graphics were coaxed out by Nikolai to meet the series distinctive style of bird’s-eye-views and maps, getting the correct scale and colors. I had black and white copies of copies of military graphics that were not as clear to a reader, and all have been redrawn and finished. The result is a product that does justice to the topic. It is a product I am proud of, and thanks to the Osprey team for the results.

Vietnam 1972: Quang Tri publishes 27 May. Preorder your copy from the website today!