The Netherlands East Indies Campaign 1941–42 describes the operational plans and conduct of the fighting by the major parties involved, and assesses the performance of the opposing forces on the battlefield, bringing to life an often-overlooked campaign of the Pacific War. On the blog today, author Marc Lohnstein gives a brief overview of this conflict. 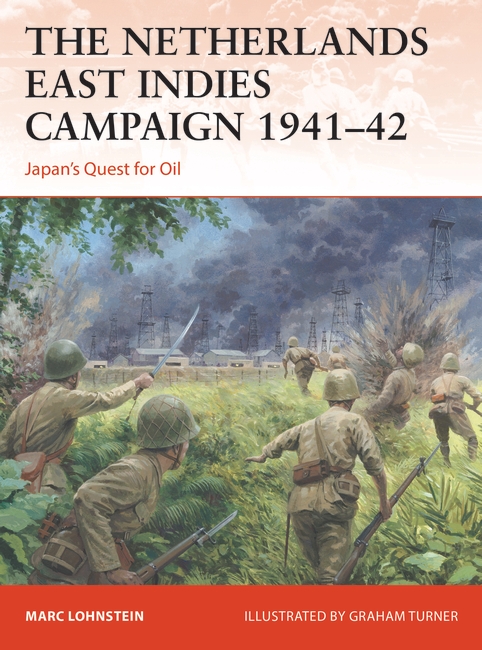 By unexpected attacks on American and British territories, while diplomatic talks were still in progress, the Japanese Empire has deliberately chosen a policy of violence. These attacks, which are almost insane and have now drawn the United States of America and the British Empire into active war with Japan in addition to the already warring China, aiming at the establishment of Japanese dominion over all of East and South-East Asia. This lust for conquest is also aimed - certainly not in the last place - at the Netherlands East Indies. The Dutch government accepts this challenge and takes up arms against the Japanese Empire.’[1]

With these words, of course in Dutch, the governor-general of the Netherlands East Indies, Jhr. Mr. Alidius W.L. Tjarda van Starkenborgh Stachouwer, on Monday, 8 December 1941 at 6.30 am (Java time = UTC + 07: 30) responded vigorously to the Japanese aggression. In the afternoon, the official declaration of war by the Dutch government in exile in London followed. Great Britain did the same in the evening. The United States declared war on Japan on the morning of 9 December 1941. The Netherlands was the first country to declare war on Japan in 1941.[2]

The tragedy for the Netherlands was that the war plans of Great Britain and the United States did not spell much good for the Netherlands East Indies. Great Britain's war plan for the Far East was contained in revisions of the 1920 War Memorandum (Eastern). According to this, in the event of a war with Japan, a battle fleet would be sent from European waters to the Far East: the Singapore strategy. The Royal Navy was thus not strong enough to maintain a fleet of offensive strength simultaneously in European and Asian waters. Since the outbreak of war in Europe in September 1939, the Royal Navy had been tied down in the Atlantic and from June 1940 also in the Mediterranean. With the capitulation of France it had also lost its main ally. Great Britain did not have the resources to wage a three-front war against Germany, Italy and Japan.[3] With that, the main burden of the Associated Powers' struggle in the Far East fell on the United States. However, the 1939/1941 Joint Army and Navy Basic War Plan Rainbow Number 5 gave priority to the Atlantic and European theater in the event of a two-front war: the "Germany first" strategy. In the Pacific, a defensive stance would be taken. Pearl Harbor abruptly ended the role of the Pacific Fleet as a potential threat on the flank of a Japanese southern advance.[4]  Moreover, Great Britain and the United States recognized the strategic importance of the Netherlands East Indies. It was however mainly seen as a geographical fact, and as such was excluded from political decision-making.[5]

The Japanese attack on the Netherlands East Indies started with a double envelopment via the Philippines and Malacca. The campaign was dominated by a battle for the airfields, especially in the so-called Outer Regions, the islands outside Java and Madura, but also in the operations on the main island of Java, where the conquest of an airfield, Kalijati, was central. In the Outer Regions, primacy rested with the Imperial Japanese Navy (IJN) with support from the Imperial Japanese Army (IJA). In the attack on Java, the IJA took the lead with the support of the IJN. The IJN and IJA carried out the operation in mutual consultation and systematically. The goals were achieved in just over three months.

The Royal Netherlands East Indies Army (RNEI Army) proved unable to cope with the Japanese onslaught. The isolated troops in the Outer Regions were defeated piecemeal by numerically stronger Japanese units. The Japanese did not have numerical superiority on Java, but their aggressive and offensive action, in combination with air support, constantly managed to disrupt the RNEI Army. On 9 March 1942, the RNEI Army capitulated on Java, and with it Dutch colonial rule ended.

As hoped, the Netherlands East Indies received support from its allies in the fight against Japan. The United States, Australia and Great Britain sent army, naval and air units. However, this Allied aid was insufficient and came too late to halt the Japanese advance.

In the book The Netherlands East Indies Campaign 1941–42. Japan's Quest for Oil this campaign is described and analyzed from a Japanese, Dutch and Allied perspective. It fits well into the Campaign series. Since 2001, Osprey Publishing has published several titles in this series relating to the Japanese Southern Offensive in 1941/1942:

A recent addition to the Air Campaign series is:

In writing it, I was grateful for three sources in particular. British historian H.P. Willmott provides in his Empires in the Balance. Japanese and Allied Pacific Strategies to April 1942 (1982) a strong analysis of the run-up to and early months of the war. For the RNEI Army the original battle reports were valuable sources at an operational and tactical level. These were often revised after the war by participants in the campaign, sometimes with illuminating drawings and interesting details added. For the Japanese perspective, the two translations of parts of the unofficial Japanese staff work Senshi Sōsho by Willem Remmelink (editor and translator)[6] have been very useful:

-     The Invasion of the Dutch East Indies, The Corts Foundation/Leiden University Press, 2015

-     The Operations of the Navy in the Dutch East Indies and the Bay of Bengal, The Corts Foundation/Leiden University Press, 2018.

These two works mainly describe the campaign at a strategic and operational level and are strongly focused on the consultations between the IJA and IJN. Less attention is paid to the tactical level. In addition, there is no reference to the frequent executions of Allied prisoners of war during the Southern Offensive.

[3] Bell, C.M, The 'Singapore Strategy' and the Deterrence of Japan: Winston Churchill, the Admiralty and the

[6] In May a third volume is published: Willem Remmelink (editor and translator), The Invasion of the South: Army Air Force Operations, and the Invasion of Northern and Central Sumatra, The Corts Foundation/Leiden University Press, 2021.

Order your copy of The Netherlands East Indies Campaign 1941–42 now!