On the blog today, decorated Vietnam veteran and former Director of the CGSC Department of Military History Dr. James H. Willbanks provides a summary of the bitter 1968 Battle of Hue. 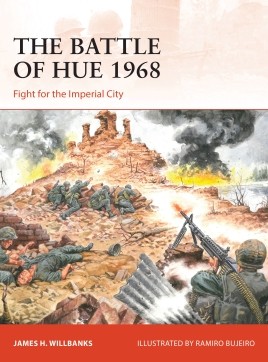 In late January 1968, some 84,000 PAVN (People’s Army of Vietnam) and Viet Cong troops launched a country-wide general offensive in South Vietnam. Taking advantage of the Tet holiday (lunar New Year) ceasefire then in effect, the Communist forces mounted simultaneous assaults on 36 of 44 provincial capitals, five of the six autonomous cities, including the capital city of Saigon, 64 of 242 district capitals, and 50 hamlets. Many of the South Vietnamese troops were on holiday leave, so the Communist forces initially enjoyed widespread success. The longest and bloodiest battle of the Tet Offensive occurred in Hue, the most venerated place in Vietnam. The bitter fighting that raged there for more than three weeks drew the attention of the world.

Hue, located astride the Perfume River along Highway 1 in Thua Thien Province, was the ancient capital of Vietnam, and as such, had been previously avoided by both sides, thus it had not seen any serious fighting prior to 1968. Hue was the third largest city in South Vietnam and was really two cities in one; the new, more modern city which included the hospital, the university, and most modern buildings lay south of the river while across the river to the north lay the two-square-mile Citadel, which had been constructed in 1802 with the assistance of the French. The fortress was surrounded by a moat and protected by a wall 30ft high and 20ft thick.

The only allied military presence in the city was the 1st Army of the Republic of Vietnam (ARVN) Division headquarters in the Mang Ca Compound located in the northwest corner of the Citadel and the U.S. Military Assistance Command, Vietnam (MACV) compound, which was located south of the river in the modern part of the city. This compound housed the American advisors to the 1st ARVN Division.

The relative peace of the picturesque Imperial City was shattered on the night of 31 January 1968 when two North Vietnamese regiments and supporting Viet Cong units simultaneously attacked and occupied both parts of the city. The 6th PAVN Regiment attacked north of the river to take the Citadel. Meanwhile, the 4th PAVN Regiment attacked the southern part of the city including the MACV compound. By dawn, the North Vietnamese held most of the southern part of the city and the southern half of the Citadel. Although, South Vietnamese troops held on to the northern half of the Citadel and the 200 Americans and a handful of Australian advisors turned back the attack on the MACV compound, the defenders on both sides of the river were greatly outnumbered they put out a call for help.

Eight miles to the south of Hue in Phu Bai, the senior U.S. Marine headquarters in the area, Task Force X-Ray, not understanding the scope of the enemy forces attacking Hue, dispatched one Marine company to relieve the MACV compound. However, this force was too small to accomplish the mission. Over the next few days, additional Marine forces were sent to the city; at the same time, U.S. Army units were ordered to the area in an attempt to seal off the city from outside enemy reinforcements. By this time, the North Vietnamese had dug in and an epic battle ensued on both sides of the river. South of the river, the fighting raged from house to house and door to door. By 10 February, elements of the 1st Battalion, 1st Marines and 1st and 2nd battalions, 5th Marines had cleared the city south of the river.

Late on 11 February, the 1st Battalion, 5th Marines was ordered to cross the river and join the fight for the Citadel. South Vietnamese forces had cleared part of the Citadel, but could not root out the enemy forces who held out in the southernmost section of the fortress against the river. The pitched battle to clear the Citadel which included some of the hardest fighting of the war lasted another two weeks.

By 25 February, the battle was over. It had been a bloody fight and resulted in heavy casualties on both sides and large-scale destruction of the city. Additionally, it soon became clear that during the early days of the battle, the North Vietnamese had rounded up a number of civilians that they described as “cruel tyrants and reactionary elements.” Eventually, some 2,800 bodies would be recovered from several mass graves.

The battle for Hue turned out to be one of the most important battles of the war. CBS News correspondent Walter Cronkite was on-scene and witnessed first-hand the bitter fighting and destruction. Upon his return to the United States, he called for the United States to seek a negotiated way out of Vietnam, no doubt heavily influenced by what he saw in Hue. Cronkite’s statement reportedly had an impact on President Lyndon Johnson, who subsequently announced in late March that he would not seek re-election.