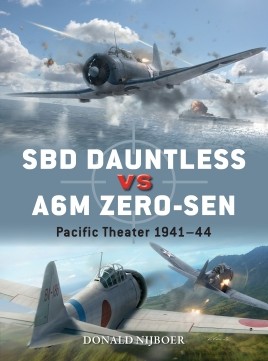 The Douglas SBD Dauntless dive‐bomber’s place in military aviation history is often over‐shadowed by the more well‐known and iconic aircraft of World War II. In Britain, the Spitfire, Hurricane, and Lancaster are revered. For Americans, the Boeing B‐17 Flying Fortress and P‐51 Mustang are seen as the key war‐winning machines of the conflict. Japan’s Mitsubishi A6M Zero‐sen is also amongst the most familiar types of the Pacific War. Yet despite its unrivalled performance in 1941–42, the Zero‐sen was unable to stop the most capable and destructive dive‐bomber of World War II. The SBD Dauntless proved to be the perfect weapon during one of the pivotal moments in modern military history, and it did more to bring about a US victory in the Pacific than any other aircraft.

The surprise attack by the Imperial Japanese Navy (IJN) on Pearl Harbor on December 7, 1941 introduced the wider world to the Mitsubishi A6M2 Zero‐sen. Although the fighter had seen combat in China since September of the previous year, the appearance of the Zero‐sen and its dominance over Allied fighters like the Curtiss P‐36 and P‐40, Hawker Hurricane, and Brewster Buffalo in the first year of Pacific War came as a baffling shock to the western Allies. Indeed, their intelligence on the Japanese aviation industry, and its technological capabilities, had been very poor in the lead up to war, having been shaped in great part by colonial attitudes and racial stereotypes. Few believed the Japanese were capable of designing and constructing combat aircraft equal to or better than Allied designs.

For both Zero‐sen and SBD crews, combat in the Pacific War came early, with the first clash between the two types taking place during the early morning attack on Pearl Harbor. After delivering US Marine Corps F4F Wildcats to Wake Island, Enterprisehad headed for “Pearl”. Since November 28, Vice Adm William F. Halsey, commander of TF 8, had had the carrier on a war footing.

From a point 75 miles southwest of Kaula, in the Hawaiian islands, 18 SBDs (13 scouts from VS‐6 and five bombers from VB‐6) were launched in two‐aircraft sections to search the eastern horizon. At 0800 hrs just west of “Pearl”, Carrier Air GroupCommander Lt Cdr Howard Young and his wingman Ens Perry L. Teaff of VB‐6 spotted a number of aircraft and the black smudges of anti‐aircraft fire over the US Marine Corps facility at Ewa. Moments later, a single‐engined aircraft approached, drawing to within 75ft of Teaff ’s tail before 7.7mm machine gun rounds found their mark as the Zero‐sen made a pass at the two SBDs.

In order to fend off the lone attacker, Young and Teaff dove towards Ford Island, but remained together as Teaff’s radioman‐gunner, RM3c E. P. Jinks, engaged the A6M2. Dissuaded from further attacks, or simply out of ammunition, the Zero‐sen pilot broke off and left Young and Teaff to face a barrage of friendly fire as they landed at Ford Island. Others were less fortunate. Ens John H. Vogt of VS‐3 tangled with three Zero‐sens at low altitude after becoming separated from his CO. In the ensuing dogfight, it is believed that Vogt collided with one of his attackers, sending both his SBD and the unidentified A6M2 crashing near Ewa.

As Lt Clarence E Dickinson and Ens John R McCarthy of VS‐6’s seventh sector team approached Barbers Point, they spotted anti‐aircraft fire, bomb explosions and dense smoke. While trying to make sense of what they saw, both aircraft were bounced at 4,000ft by SEA1c Isao Doigawa and PO3c Shin‐ichi Suzuki from Soryu. As McCarthy maneuvered his SBD to support Dickinson, he was hit, falling away in smoke and flames. McCarthy managed to bail out, but his gunner, RM3c Mitchell Cohn, was killed. As four more Zero‐sens then arrived on the scene, Dickinson began evasive maneuvers to throw off the attackers’ aim. His radioman‐gunner, RM1c William C. Miller also returned fire, only to be wounded early in the combat. In the end Dickinson could not evade his pursuers, and cannon shells ripped into his starboard wing and set it on fire. As his SBD entered into a right‐hand spin, Dickinson bailed out at just 800ft. Miller did not survive.

In total, five SBDs were shot down by IJNAF aircraft (the fifth one had fallen to several D3As from Shokaku and Zuikaku) and sixth had fallen to friendly fire. The one‐sided clashes off the coast of Hawaii on December 7 had graphically shown just how deadly an opponent the Zero‐sen could be.

The duel between the Zero‐sen and the SBD Dauntless was a unique example of the bomber versus fighter dynamic. Virtually every bomber in World War II was vulnerable to fighter attack no matter how many guns and turrets were employed – they could not survive without fighter escort. That was not quite the case for the Dauntless, however. Even without an escort, SBD pilots and their radioman‐gunners had a good chance of survival, although many returned with heavily damaged aircraft. The Zero‐sen was clearly superior to the Dauntless in every respect, but for US Navy and US Marine Corps aircrews, their trusty SBDs came with some unique fighting features.

The SBD’s astonishing success at the Battle of Midway (June 4–6, 1942) is often viewed as the battle that turned the tide in the Pacific War. However, the aerial engagements fought between Dauntlesses and A6M2/3s during the campaign for Guadalcanal would prove even more decisive. US Navy, US Marine Corps, and US Army Air Force (USAAF) units waged a war of attrition that the IJNAF could not possibly win. The six‐month air, sea and land battle that took place between August 1942 and February 1943 proved that air power in the Pacific would be the deciding factor.

SBD crews were officially credited with an amazing 138 aerial victories, 106 of them Zero‐sens. These are incredible totals, but they suffer greatly from overclaiming which occurred on both sides.

The SBD has to be the most successful dive‐bomber of World War II. In 1942 alone it sank in whole or in part six aircraft carriers, one battleship, three cruisers, four destroyers, one submarine, and 14 transports (the latter mainly off Guadalcanal), although a few were shared with shore‐based USAAF aircraft.

From 1941 until the service introduction of the F6F in September 1943, the Zero‐sen was the world’s best carrier fighter. Yet despite its then‐unrivaled capabilities, which were fully exploited by well‐trained pilots, A6M‐equipped units embarked in IJN carriers and shore‐based at Rabaul were unable to stop US Navy and US Marine Corps SBDs from delivering lethal blows at critical moments during 1942.

SBD Dauntless vs A6M Zero-sen is available to order now on our website!