In today's blog post, we're looking at three fantastic pieces of artwork from three of our October 2021 titles. Let us know what you think in the comments section and, if you would like to see any artwork from any of our November titles, be sure to mention that too!

MAA 541: Armies of the War of the Grand Alliance 1688–97 by Gabriele Esposito
Artwork by Giuseppe Rava 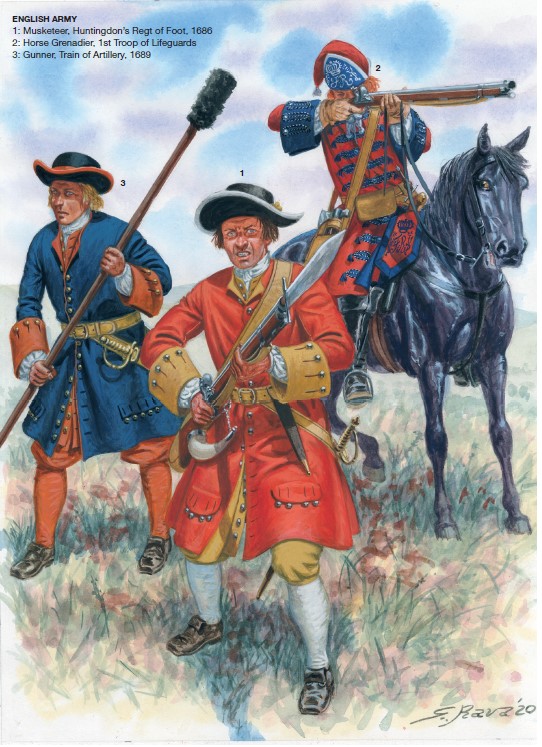 The first plate, requested by PAUL W, comes from Armies of the War of the Grand Alliance 1688–97 and depicts several members in the English Army:

CBT 60: Japanese Soldier vs US Soldier by Gregg Adams
Artwork by Steve Noon 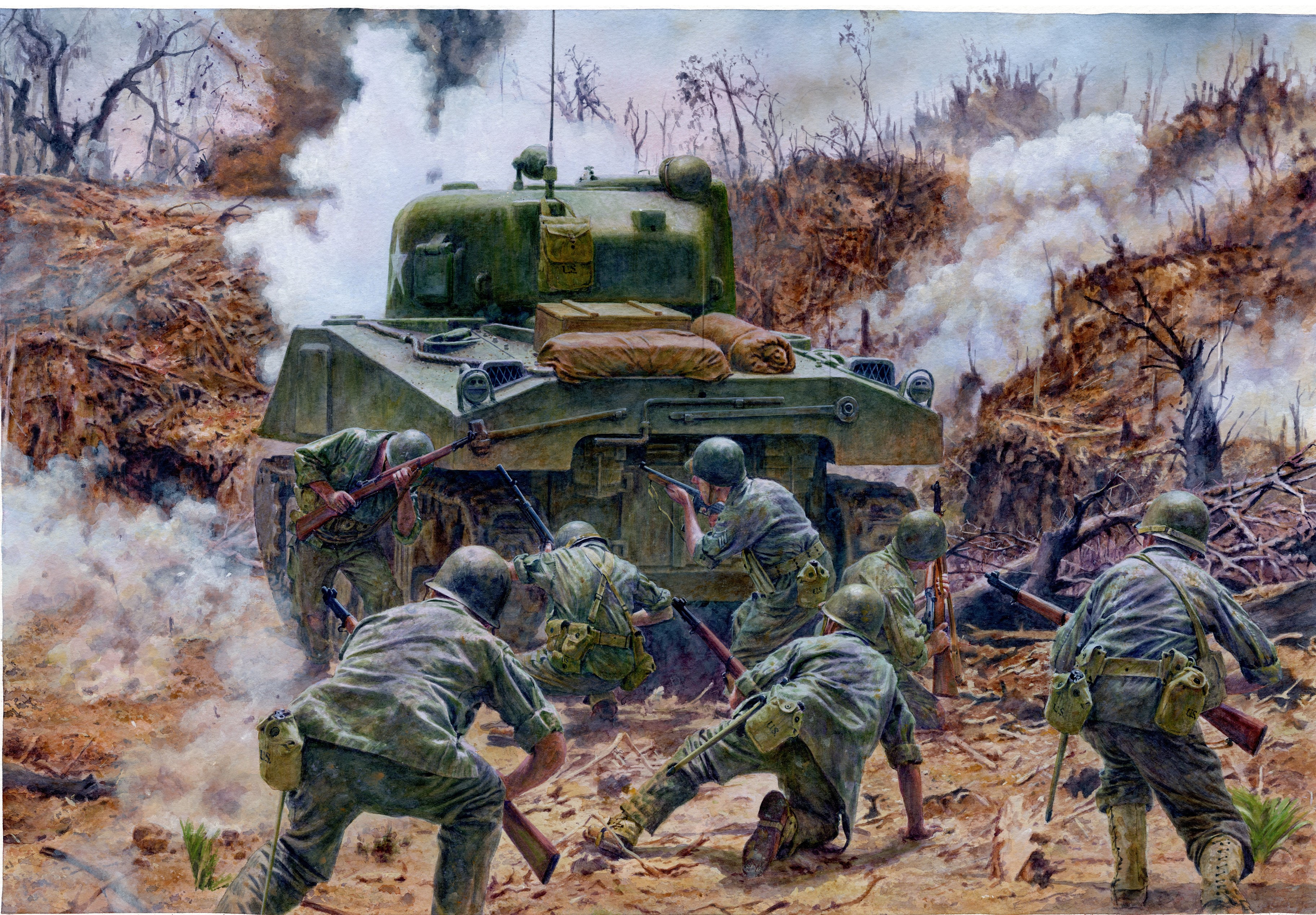 The next illustration, requested by KAL9000, depicts the scene on the morning of June 20 1944, when the 1/162d Infantry, supported by two M4A1 tanks from the 603d Medium Tank Company attacked the West Caves complex. This area had been shelled and bombed for several weeks, becoming a rough “moonscape” of coral. The entrances to the caves are located at the bottom of a depression in the coral surface called a sump. Some Japanese are firing from positions in and around the cave entrance. The sump has steep sides, in some places nearly vertical. Other Japanese are fighting from slightly higher ground west of the sump. Near noon, an M4A1 medium tank approaches the edge of the sump. Accompanying the tank is a reduced rifle squad. One scout is falling back to shelter behind the tank from the enemy fire. The squad leader, with a Thompson submachine gun, is immediately behind the tank, trying to sort out his squad. The BAR man is to his left and four M1-equipped riflemen are cautiously following. On Biak a new form of defense was encountered by the Americans. Rather than trying to drive the attackers back into the sea, the Japanese would defend positions to the bitter end, seeking to inflict as many casualties as possible on the Americans. 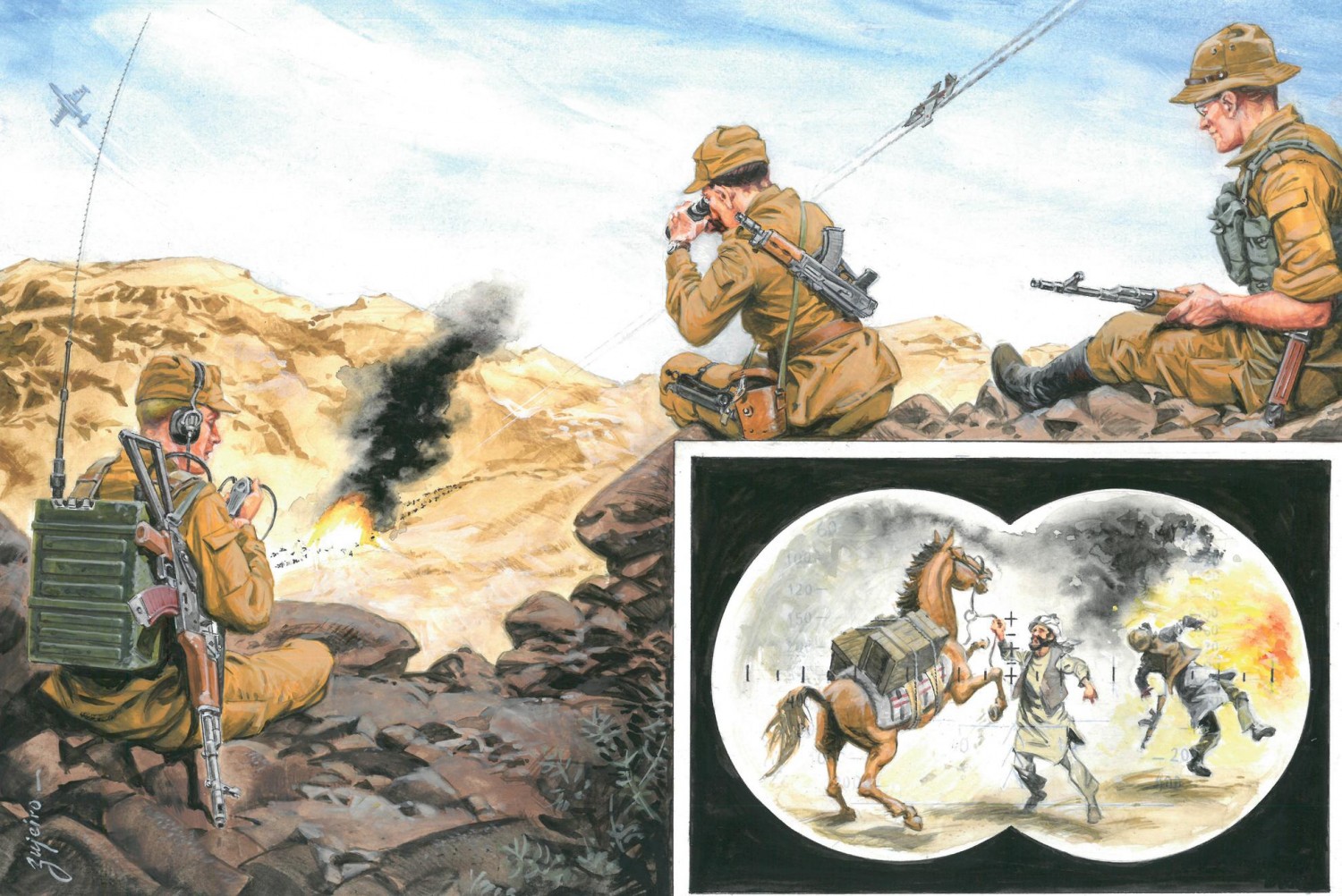 This final illustration, requested by GI Gene, depicts a team of Spetsnaz from the 154th Detachment attacking Afghan rebel supply lines in July 1984. A soldier is using an R-159 radio to call in targeting information, while an officer uses Geodezy B-12 binoculars (the view through which is shown in the bottom right-hand corner) to monitor the caravan. The caravan is being pummelled by two Su-25 close attack aircraft from Bagram Airbase. One is pulling up, having just dropped two FAB-500 general purpose bombs, while his wingman is delivering a salvo of 80mm S-8 rockets from his B-8M1 rocket pods.