In today's blog post, we're looking at three fantastic pieces of artwork from three of our March 2022 titles. Let us know what you think in the comments section and, if you would like to see any artwork from any of our April titles, be sure to mention that too! 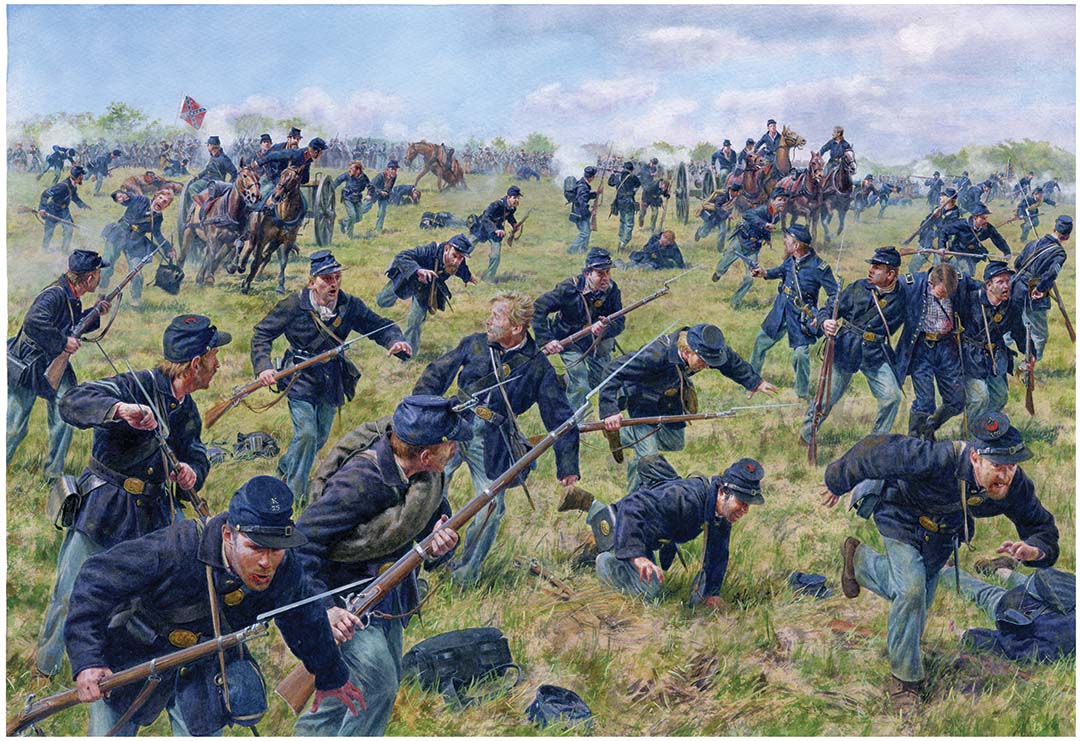 The first image in our reveal shows the retreat from Blocher's Knoll - 3.30 - 4.00 PM. The most important tactical action of July 1 involved the collapse of the 1st Division, 11th Corps, at 3.30 p.m. This fight took place on the fields of the David Blocher farm, a twenty-three acre property located along the Carlisle Road. The only appreciable rise in ground in this area was Blocher’s Knoll, a hillock that stood southwest of Rock Creek. Thick woods skirted the banks of the creek, which ran north–south through this sector of the field. At approximately 2.00 p.m., Brig. Gen. Francis C. Barlow’s division took position atop the knoll, hoping to get into a position to deal with the threat posed by Maj. Gen. Robert Rodes’s division on Oak Hill.

Sometime after 3.00 p.m., Confederate infantry commenced its attack on Barlow’s division. Brig. George P. Doles’s brigade from Rodes’s division moved first, followed by Brig. Gen. John B. Gordon’s brigade of Maj. Gen. Jubal Early’s division. Near the intersection of the Carlisle and Table Rock roads, Doles’s brigade became embroiled in a fight with the 157th New York from Brig. Gen. Alexander Schimmelfennig’s division and Doles’s men had to pause to deal with it. Moving ahead without Doles’s support, Gordon’s brigade drove back Barlow’s skirmishers, crossed Rock Creek, and ascended the northeast slope of the knoll. As Gordon’s men cleared the woods, the two sides opened fire.

Barlow’s men took the worst of the punishment. Pvt. Reuben Ruch of the 153rd Pennsylvania recalled how the dead “were piled up in every shape, some on their backs, some on their faces, and others turned and twisted in every imaginable shape … As I stood between those two lines of battle, viewing the windrow of human dead composed of my old comrades, it presented a picture which will never fade from my memory while I remain on earth—a picture which tongue cannot tell nor pen describe.”

At the height of the emergency, Barlow moved the 75th Ohio and the battalion from the 17th Connecticut to the crest to shore up his right flank. Meanwhile, Schimmelfenning sent Col. Włodzimierz Krzyżanowski’s brigade to support Barlow’s left flank. But these reinforcements did little good. With Gordon’s Georgians pressing vigorously and with the reappearance of Doles’s men, Barlow’s line broke. The 13th and 60th Georgia crested the knoll’s highest point and began firing into the Union soldiers who had been driven back into the low ground. With disintegrating infantry support and having lost their commander, Lieut. Bayard Wilkeson, the gunners of Battery G limbered up and galloped off the field. In addition to Wilkeson, Battery G lost one man killed, twelve horses killed, five men wounded, and four men captured.

Eager to get away, many of Barlow’s infantry abandoned their equipment and weapons along the slope, making themselves more fleet of foot. Barlow tried to quell the alarm, riding among his men to rally them, but a Confederate ball pierced his left side, forcing him to dismount. Two helpful soldiers carried him under each arm, until they, too, got swept up in the rout. They dropped Barlow in the grass and he soon fell into enemy hands. 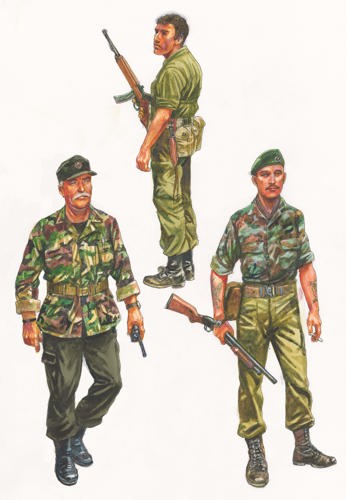 The second piece of artwork in our reveal, requested by GI Gene shows three uniforms worn by soldiers between 1975 and 1995.

Top Centre: Costas Georgiou, alias ‘Colonel Callan’; Angola, 1975–76 After arriving in Angola in 1975, this ex-British Parachute Regiment soldier of Greek-Cypriot descent took the nom de guerre ‘Tony Callan’. As the leader of a predominantly British group of mercenaries in support of the pro-Western FNLA, ‘Callan’ (whose pseudonym recalled the hero of a popular British TV series) would have had priority of choice among the mixture of equipment and weapons provided. Photos show him wearing olive drab shirt and trousers with high-leg boots. His belt order includes a US-style canteen and carrier, a combat knife, and a utility pouch worn on his right. He has an unidentified shoulder rig for a handgun, and is holding an M1/M2 carbine fitted with a 30-round magazine. The M1 (semi-automatic) and M2 (fully automatic) fire a short .30cal carbine cartridge (7.62 x 33mm); while light, handy weapons, they are therefore largely ineffective beyond short ranges.

Bottom Left:  Bob Denard; Kandani, Grande Comore, 1995 In September 1995, mercenaries under the 66-year-old Denard took control of Grande Comore, the main island of this small group in the western Indian Ocean. It was at least the third such operation that the veteran French mercenary had led there, and he had enjoyed power and wealth on Grande Comore during 1978–89. This time he had misjudged the priorities of the previously-indulgent French intelligence services, and within days Denard and his men were forced to surrender to a French intervention force. He was photographed on 5 October 1995 at the end of his long career, moments before being taken into French custody. Note the elephanthair bracelet on his right wrist, a reminder of his long association with Africa. (Notes on Denard’s earlier career, and images of him in the Congo in 1962 and 1967, will be found in Men-at-Arms 492, Modern African Wars (4): The Congo 1960– 2002, Plate C2 and pages 20 & 45.) (3)

Bottom Right: Alan Boydell, SNAL Jungle Commando; Moengo, Suriname, 1989 A former Royal Marine, Englishman Alan Boydell has a long career in soldiering and as a private security contractor. In 1989 he joined a number of ex-servicemen in Suriname to instruct indigenous rebels of the so-called Jungle Commando. The green beret with bronze ‘globe-and-buster’ badge recalls his previous service. The camouflage-pattern shirt and the jungle boots are US Army surplus, and the trousers are British Army ‘lightweights’. A British 58 Pattern belt supports an unidentified ammunition pouch and a canteen, and the weapon is a locally-purchased 12-gauge Mossburg pumpaction shotgun. Boydell would later fight for both Croatian and Bosnian-Muslim forces in former Yugoslavia in the early 1990s.

The final image, requested by Adam C, shows the B‑36B-5-CF 44-92038 of the 7th BW(H), Carswell AFB, 1949. In 1947 the USAF had accepted the central doctrine of strategic bombing, but it was still hesitant, in the post-war period, about the huge effort and expense of introducing the B-36, the logistics to support it and the escort fighters needed to protect the bomber for at least part of its mission. As SAC’s first commander when it was established in March 1946, Gen Kenney had recommended the cancellation of the order for 100 B-36s at $2.5m apiece in favour of the shorter-ranged B-50A ‘medium’ bomber, based on the proven B-29 and using similar R-4360 engines as the B-36. He conceded that a limited number of B-36s might be used as longendurance anti-submarine patrollers or even as aerial tankers. This long debate would eventually lead to the acceptance of the B-47 jet bomber, but it would still leave the USAAF without a very long-range heavy bomber. Rival views came from Gen Carl Spaatz, Commanding General of the Army Air Forces, and Brig Gen Nathan Twining, the Fifteenth Air Force commander, who supported the B-36 in the face of a chilling Cold War in Europe and continued communist threats in the Far East. Both men also feared the possibility of a ‘nuclear Pearl Harbor’ attack by Soviet bombers and the occupation of Western Europe by the Soviet Union’s massive land forces. As in World War 2, very long-range air power would be the USA’s only way to retaliate. Although Kenney backed down, his criticisms of the B-36 continued, encouraging other opponents of the bomber.