Today on the blog we’re looking at the ancient civilisation of Rome, one of the largest empires in the ancient world containing roughly 20% of the world’s population at the time. The Rome deck covers the Roman Republic (509 BCE – 27 BCE) and the Roman Empire (27 BCE – 476 CE). 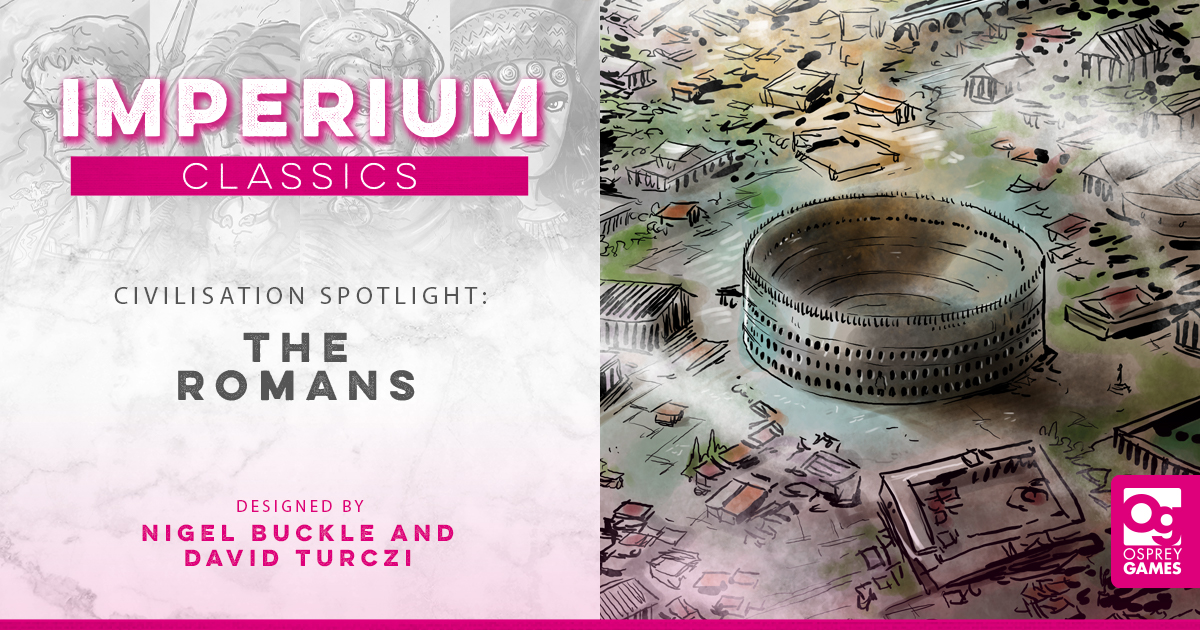 Looking at the Roman power card you can see the two main strategies for Rome: gaining population or gaining fame cards. More on the latter at the end of this blog post.

In the early game you will want to acquire and place regions to build up your nation and make your two prosperity cards as effective as possible. Roman Expansion helps greatly, and you will want to play this before the region common cards are all taken to guarantee you get two regions, even if your opponents have not played regions themselves yet. You can garrison your regions with any cards you do not immediately need (such as cultured cards) as you know you will be seeing them later when you play Glory and abandon them with their associated region. You also want to get the City of Rome into play to give you either a steady income or a way to cycle cards. While your city building proficiency is not quite on a par with the legendary city states of Greece, having Rome in play followed by a city or two acquired from the market can lead to a nice population income or deck speed increase – both of which are essential to scoring as well as the Romans. 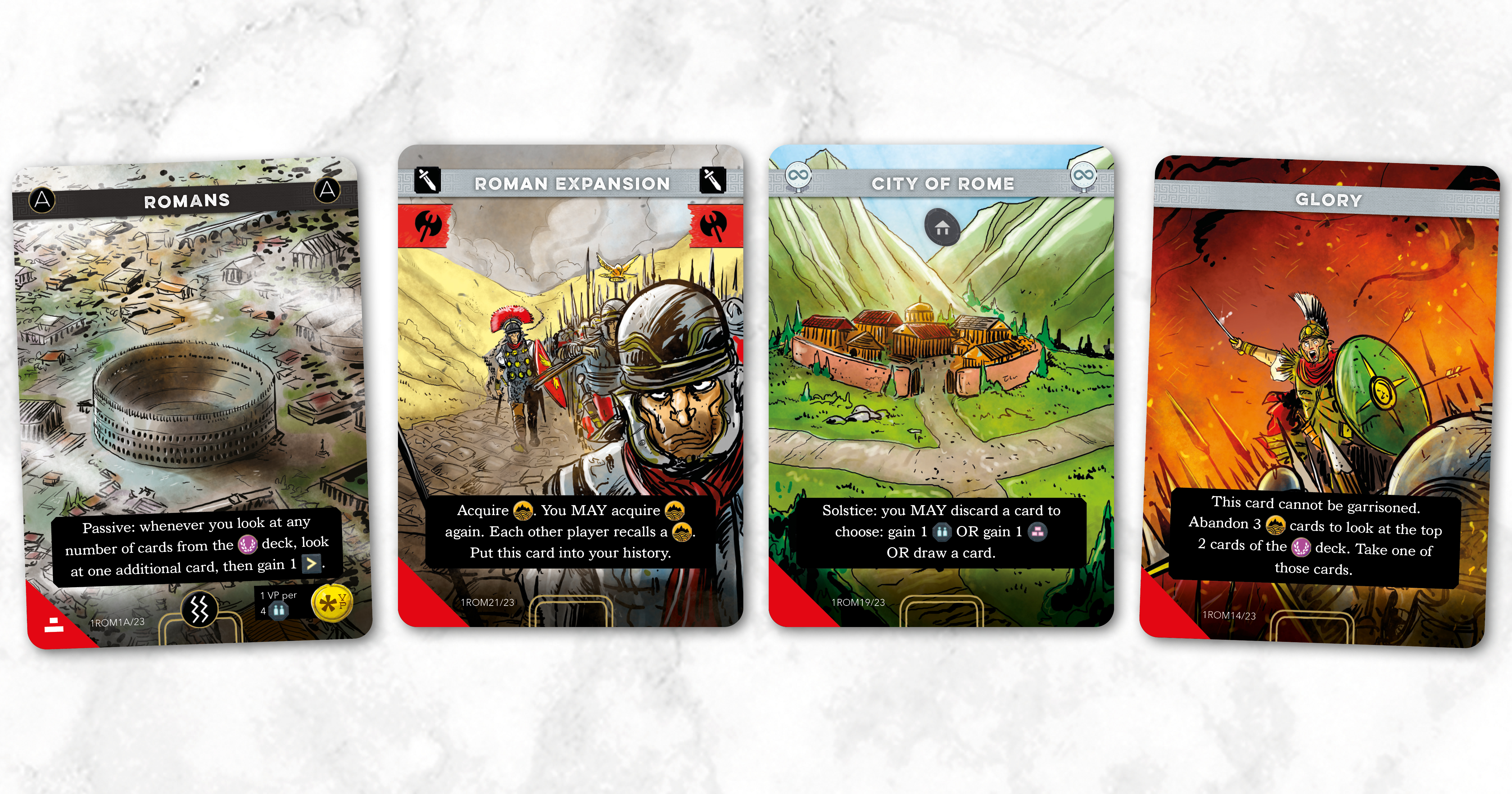 Julius Caesar is your accession card and when you take him you become an empire. Ideally you want to play Caesar when there is a tributary or region in the market, but drawing two cards can be useful too.

Once an empire, you have a number of choices: you could develop your Legions so you can continue to conquer more regions or you could be a bit more aggressive and develop Roman Invasion instead. Don’t forget Rome the Eternal City though, as this upgrade to the older City of Rome card will boost your score and save you a card during the Solstice phase. 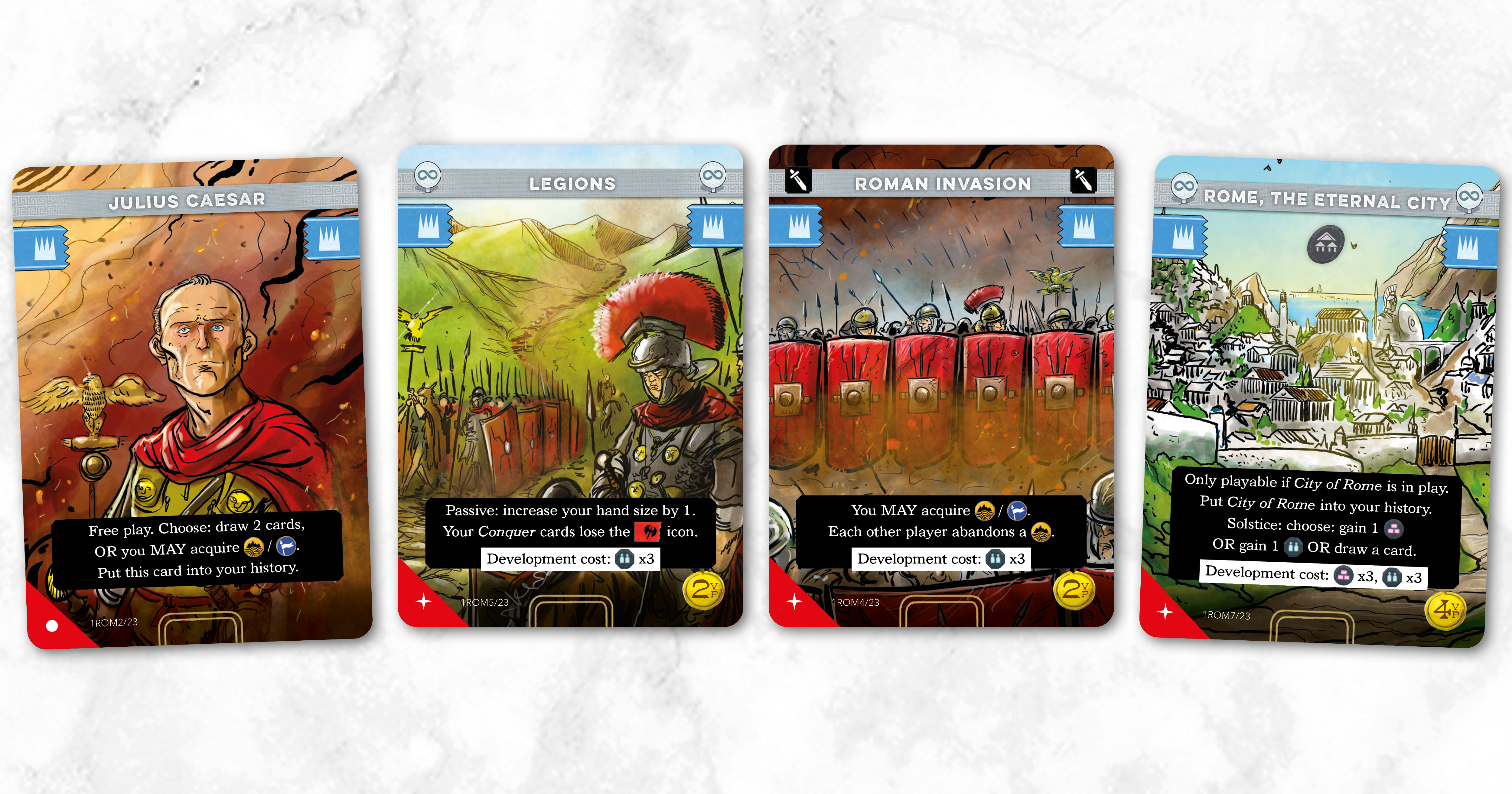 With this spotlight on the Romans it is worth shining a spotlight on fame too. The fame deck is a separate stack of cards that all players have access to. These are powerful cards and many are worth a significant number of victory points. However, getting them takes a bit of work and is not without some sacrifice. Most nations have a glory card, and when you play that you abandon (discard) 3 played regions to draw two fame cards and choose one of them. One side of the Roman power card lets you draw one more, giving you more choice. Abandoning 3 region cards hurts because you get those cards back into your deck and you will have to spend subsequent actions playing them again. Any cards you’ve stored underneath the regions as a garrison also return to your deck – but whether that’s a good thing depends on whether they’re cards you were saving for this moment, or unrest cards you had hidden away!

Once all the fame cards have been taken, then the next glory card played resolves the King of Kings card instead, which is flipped over to indicate the end of the game has been triggered. So before you take that last glory action, check you are ready for the game to end. 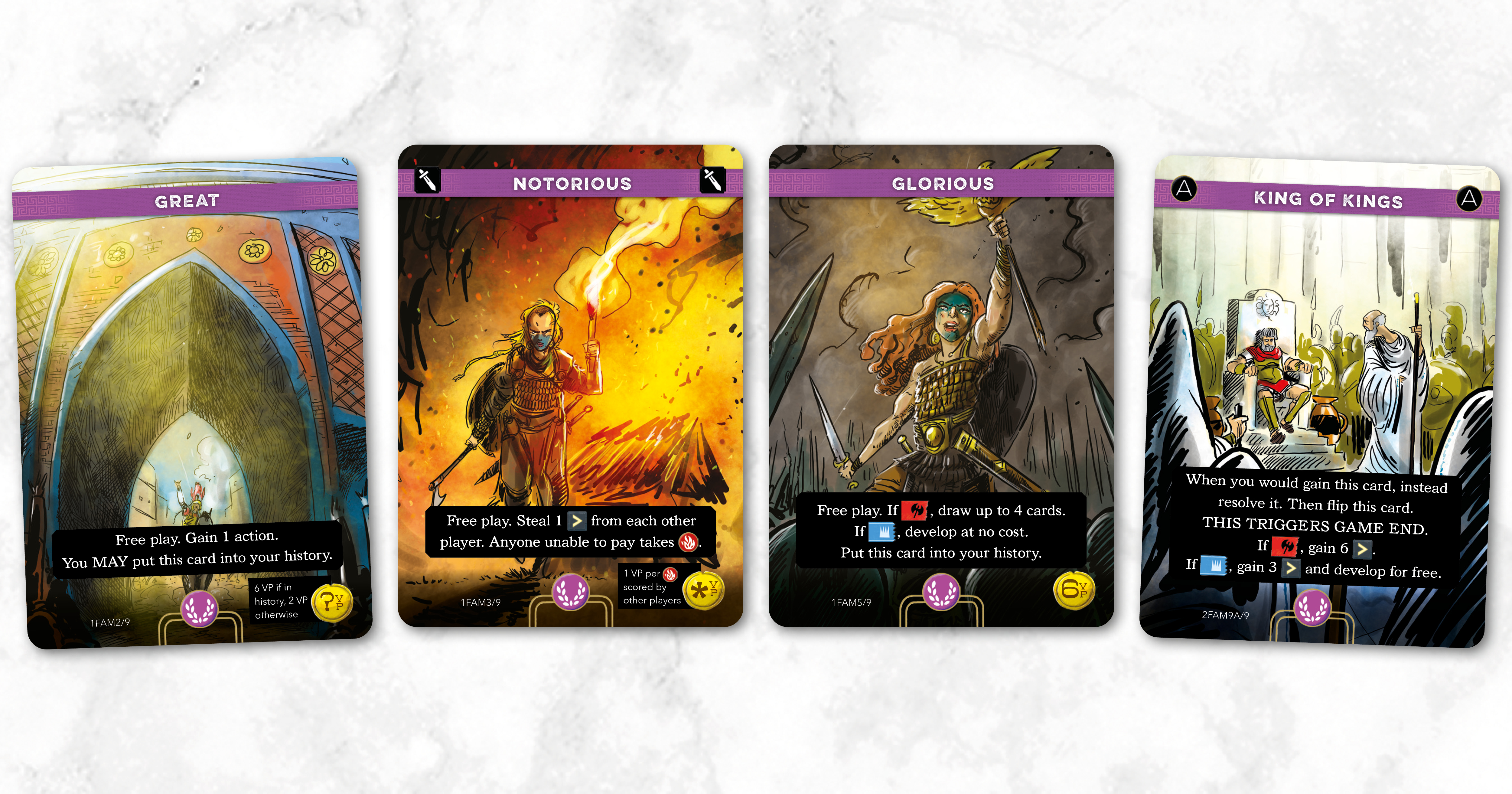 Read more about Imperium on our other spotlight blogs:
The Carthaginians
The Egyptians
The Persians
The Mauryans
The Celts
The Qin Dynasty
The Macedonians
The Minoans
The Olmecs
The Scythians
The Atlanteans
The Arthurians
The Vikings