The recently released Combat title, Hungarian Soldier vs Soviet Soldier: Eastern Front 1941 is a beautifully illustrated title that assesses the Hungarian and Soviet forces that clashed repeatedly in 1941 during the Barbarossa campaign of World War II. In today's blog post, author Péter Mujzer gives a brief overview of one of the battles fought in this campaign — the battle of Nikolayev. 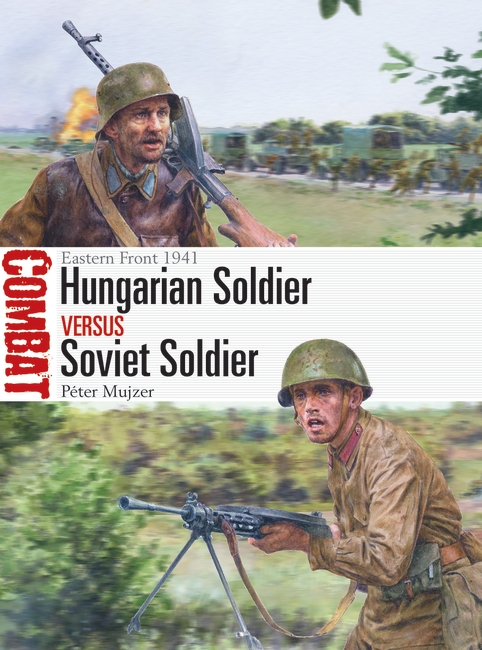 Combat 57 Hungarian Soldier vs Soviet Soldier is my first book with Osprey. I greatly enjoyed learning about the whole process of bringing an Osprey book to publication, of which research and writing is only the beginning; much additional work goes into parts of the book the reader cannot see, such as producing references for the illustrator and cartographer, obtaining permissions for the reproduction of images, copy-editing and proofreading. I am enormously grateful to my editor at Osprey, Nick Reynolds, for helping me throughout. Special thanks are due to Steve Noon, who painted authentic Soviet and Hungarian figure plates and vivid and accurate battle scenes for the book.

The Barbarossa campaign started 80 years ago, on 22 June 1941, pitting the forces of the Soviet Union against those of the Third Reich and its allies. Hungary was among the less willing allies who participated on the side of the Germans. The main Hungarian force that fought on the Eastern Front was the Mobile Corps, which consisted of armoured, motorized, bicycle and cavalry units. The actions covered in detail in my book involved the Hungarian motorized rifle, light tank and armoured car units, and of course their Soviet opponents. Owing to the constraints of the Combat series format, however, the Hungarian Hussars and their actions were excluded. In this blog post, I would like to tell the story of the last battalion-sized cavalry charge of the Royal Hungarian Army.

During the battle of Nikolayev in August 1941, the Hungarian troops – especially the cavalry – and their Soviet opponents suffered amid extreme conditions, with temperatures sometimes reaching 49 degrees Celsius, and a lack of water. The last real cavalry charge of the Hungarian Hussars took place during the battle, on 15 August, when the II Battalion of the 4th Hussars distinguished themselves at Nova-Dancing, Ukraine. Major Mikecz’s cavalry combat group hindered the Red Army units as they sought to break out from an encirclement and thus saved the flank of the German 79th Motorized Infantry Regiment.

One eyewitness of the Hungarian cavalry charge, a German war correspondent named Erich Kern, recorded his impressions of the Hussars’ exploits in his book Der Grosse Rausch: Der Russlandfeldzug 1941-1945, published in English in 1951 as The Dance of Death. According to Kern, the German infantry were pinned down behind a railway embankment; they had attempted to attack four times, but each time were pushed back by superior Soviet forces. Although the Germans had requested an artillery barrage to defeat the enemy, they were surprised to see Hungarian cavalry moving up in support instead.

The Germans’ amusement at the appearance and equipment of these horsemen gave way to astonishment as the Hussars attacked in strength, led by their colonel, who was wearing silver rank insignia and swinging his sabre. The Hungarian cavalrymen were covered by several armoured cars on their flanks. Kern and his companions stood up to watch the charge; he described how although the Soviet troops fired on the Hungarian cavalrymen, their fire petered out as they succumbed to panic and mounted a hasty retreat, with the sabre-wielding Hussars in close pursuit.

The Hussars successfully stabilized the Axis front line and made contact with the 79th Motorized Infantry Regiment. On 16 August, the German and Hungarian forces continued their attacks and broke the Soviet forces’ resistance, subsequently occupying the Ingul river valley. Later that day, the Hungarian artillery went into firing positions west of Mikhailovka to support the troops.

During the two-day battle, the 4th Hussar Regiment lost one officer, six other ranks and 14 horses; two officers and 24 other ranks were wounded, and four Hussars went missing in action. The Hussars captured 175 Soviet prisoners, three tanks, two armoured cars, two anti-tank guns, one anti-aircraft gun, six trucks and one aircraft. Major Kálmán Mikecz was promoted to lieutenant colonel in 1941 and was awarded the Signum Laudis for his actions.

The battle of Nikolajev ended on 17 August and the majority of the Soviet forces escaped to fight another day.

Hungarian Soldier vs Soviet Soldier is out today! Order your copy to read more.