Battle Tactics of the American Revolution is an absorbing study that investigates the various participants’ battlefield tactics, casting light on how tactical theory and battlefield experience shaped the conduct of battle in the American Revolution. In today's blog post, author Robbie MacNiven gives a brief overview of some of the forces involved in this conflict and their tactics. 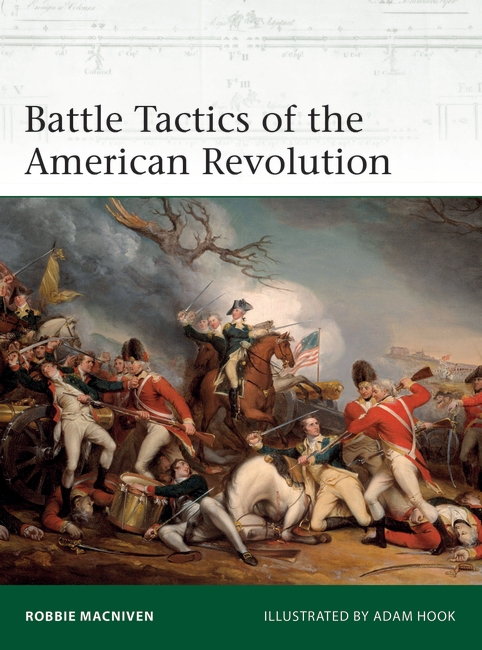 On April 19, 1775, American colonial militia opened fired on British regulars during the latter’s attempt to confiscate weapons and supplies in the Massachusetts town of Concord. The day’s fighting precipitated the outbreak of a global conflict that would rage for the next eight years. It also highlighted how relatively ill-prepared Britain’s armed forces were for the return of large-scale fighting in North America.

Britain had learned a great deal while engaged against French and Native Americans during the Seven Years’ War, but those lessons had grown somewhat stale by 1775. While British commanders, including veterans of North American fighting like William Howe and Thomas Gage, understood the importance of tactical flexibility and irregular combat, initial engagements showed that the standard tactics of the British Army would once again be enquired to endure a steep learning curve. The Patriot predilection for occupying defensive positions and delivering accurate and sometimes overwhelming firepower meant the more stilted “Prussian” style of fighting methodically and in close order met with disaster, as evidence by the engagement at Bunker Hill. Instead, the British adopted a looser, open order and relied on speed and aggression over firepower. The effect of these new tactics, adopted in early 1776, was almost immediate. British forces outflanked and routed Washington’s Continentals on Long Island and held the tactical upper hand in the majority of large-scale engagements for the rest of the war.

For their own part, American colonial forces of the nascent United States had an initially ambiguous attitude towards how best to prosecute the war. The idea of a standing army went against the prevailing spirit of the newly formed Congress, but was necessary not only as a means of resisting British efforts to crush the revolution, but also to cement the rebellion as more than merely a temporary uprising. The tactical doctrines of both the militia and the new Continental Army were almost all based on those already in use by the British Army, but there was no single, cohesive drill. This changed in 1778, with the assistance of Friedrich Wilhelm von Steuben, a European career soldier who streamlined and standardised the drill of the Continental Army. This, combined with the combat experiences of the past three years, helped to put the Continentals on the same footing at British regulars. Becoming less and less reliant on defensive tactics and static firepower, Continental forces became proficient with the bayonet and were able to conduct dangerous and demanding military operations, such as the surprise storming of British fortifications at Stony Point in 1779. By the latter years of the war, Continental Army regiments were more than capable of going toe-to-toe with their British counterparts in most engagements, including pitched battles.

While the British government was aware of the growing unrest throughout the colonies in the years precipitating the Revolution, the outbreak of hostilities still caught the government short. In an effort to meet an immediate need for trained soldiers, the British turned to a familiar source – Hessen-Cassel. This small German state had made a particular success of hiring out its military forces, with Britain being its most regular client over the course of the eighteenth century. Nor was Hessen-Cassel the only one to provide military assistance to Great Britain at the outbreak of the American Revolution – in total seven states sent soldiers to assist British efforts in different parts of the globe. While most broadly adhered to the Prussian style of fighting, the tactics they employed on campaign varied from state to state. Regiments from Braunschweig, for example, largely embraced the loose, rapid style of combat favoured by the British, whereas the Landgrave of Hessen-Cassel forbade his forces from adopting some of the more practical adaptations of their allies. While Hessian regiments did form in two ranks in combat, they generally retained close order and advanced at a slower pace than the British, a factor that could act as both a help and a hinderance depending on battlefield circumstances. This was offset somewhat by the use of Hessian Jäger, rifle-armed light infantry who assisted the British in matching the colonial predilection for “bushfighting” and irregular warfare.

France formally recognized the United States on February 6 1778, which led to a declaration of war by Great Britain. Land operations were initially conducted mainly in the Caribbean, during a series of successful strikes on British-held islands, and during the siege of Savannah, Georgia, where a British garrison repelled the efforts of the Patriots despite a strong French presence. Following the Seven Years’ War a doctrinal struggle had raged at the heart of the French military, as officers argued the merits of the Prussian system of discipline and firepower against more conservative French styles that emphasized ardor and aggression. French military reforms were being conducted as the war played out, with French forces giving a good account in the numerous operations they were involved in. In particular, the French Vallière system of artillery came to be replaced by the Gribeauval system, a fact that elevated the efficiency and battlefield effectiveness of French gunners and laid the foundations for the later successes of French artillery under Napoleon. Important technical military expertise was also provided by French engineers during siege operations such as Yorktown.

Fighting in North America between these major powers covered a huge range of tactical circumstances. From pitched battles involving regular line infantry clashing at close range to woodland skirmishing, ambushes and partisan warfare, night-time raids, contested amphibious landings, methodical sieges and escalation assaults, the full gamut of 18th-century warfare was experienced at some point during this wide-ranging and hard-fought conflict.

Battle Tactics of the American Revolution is out today. Get your copy from the website now!