On the blog today, Peter E. Davies, gives a brief overview of the oft-overlooked B-66 series,the subject of his latest Combat Aircraft title, B/EB-66 Destroyer Units in Combat. 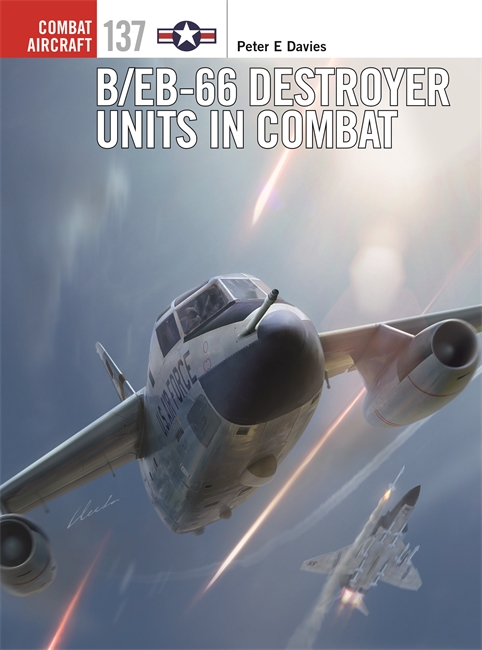 While writing several other books on the Vietnam air war I became increasingly aware of the vital part played by some of the support aircraft that made air operations like Rolling Thunder and Linebacker possible. In particular, the crucial role of the small and overworked RB/EB-66 Destroyer fleet in providing electronic warfare protection for those massive strikes by F-105s, F-4s and B-52s obviously invited closer examination. Its participation was so important that entire Rolling Thunder strike forces would usually be cancelled if no Destroyer protection was available. Without it the destruction inflicted by radar-controlled SA-2 ground-to-air missiles and AAA guns could easily have made US loss rates unacceptably high. For the North Vietnamese air force, shooting down Destroyers became a top priority once their effectiveness was realized by Hanoi.

Although the Destroyer force received hardly any publicity during the war (partly due to the secret nature of its activities), the courageous crews who flew their vulnerable, unarmed aircraft around the heaviest air defenses in history saw plenty of hair-raising action. Encounters with SA-2s and MiG fighters were frequent and crews had to rely on their hard-won skills to defeat those threats, often assisted by their escorting fighters. The famous, tragic loss of EB-66C ‘BAT 21’ exemplified the dangers they faced and gave rise to one of the most dramatic rescue stories of the war.

The USAF was most fortunate in having such a capable ECM force at that time. It had done little to remedy the lack of tactical electronic warfare (EW) aircraft even though the Korean War had revealed the need for them. An urgent development program was begun in the early 1960s when the formidable threat posed by Soviet anti-aircraft missiles became apparent. Luckily, a suitable aircraft was available although, like the F-4 Phantom II, it was based on a US Navy design. It had also already served in several very different guises.

In the late 1940s, the US Navy planned an 83,000 tons ‘super carrier’, the USS United States, complete with large aircraft capable of carrying 10,000 lbs nuclear weapons. At Douglas Aircraft designer Ed Heinemann wisely reduced the weight of his A3D Skywarrior bomber proposal for the USN requirement to 68,000 lbs so that it could operate from smaller, Forrestal-class carriers if the USS United States was cancelled. The resulting aircraft was a very advanced design at the time, incorporating twin, podded jet engines, a wing swept at 36 degrees, and state-of-the-art radar bombing/navigation equipment. It served the Navy as a nuclear bomber from 1956 to 1963 and thereafter as a tanker and EW platform until early 1990s, including similar roles to the RB-66’s in Vietnam.

The design had a second life when the USAF sought to replace its WW II-vintage RB-26 light reconnaissance bomber. A modified, de-navalized A3D was chosen as an interim replacement with reconnaissance as its primary role and as the RB-66A it first flew on 28 June 1954. The following year Douglas’s Tulsa, Oklahoma plant began production of 36 RB-66C EW variants, with four ‘Raven’ radar operators in the bomb-bay operating radar detection and analysis equipment similar to that in Strategic Air Command’s sophisticated RB-47H Stratojet. Although small in number, they soon became crucial assets to Tactical Air Command (TAC) which would later regret changing the order for 72 RB-66Cs to include 36 WB-66D weather reconnaissance versions. WB-66Ds never received their full complement of equipment and were soon retired.

The first B-66 batch of RB-66As was followed by sufficient B-66B bombers to equip one bombardment wing (BW); the 17th BW. In 1958, those aircraft were transferred to the 47th BW at Sculthorpe, UK where they replaced B-45A Tornados as tactical nuclear bombers until 1962. RB-66Cs also appeared in Europe from 1956 with the 10th Tactical Reconnaissance Wing. They flew many secret intelligence missions around the Soviet bloc borders, interrogating and mapping radar sites while photo-equipped RB-66Bs provided visual imagery. During the Lebanon crisis, they had a combat baptism when several aircraft returned from low altitude missions with small-arms damage. When France expelled US nuclear forces from its territory in 1959, the 10th TRW moved to UK bases. Their hazardous border surveillance flights continued. Several were challenged by Soviet fighters and one RB-66B was shot down by MiG-19s when it strayed into East Germany in 1964.

However, the B-66 had entered its most productive era as its capabilities were increasingly realized by tactical commanders. RB-66s had their defensive tail-guns replaced by extra ECM modules and 13 redundant B-66Bs were converted to Brown Cradle ECM platforms with jammers, chaff dispensers, and radar warning receivers. Despite this proven usefulness, in the higher USAF command echelons there were moves to retire the aircraft although no suitable replacement was in sight. In fact, the expanding Vietnam conflict created such a need for Destroyers that they were moved to SE Asia from bases in Europe, Japan, and the USA where the training wing at Shaw AFB was depleted.

Destroyers became a highly valued, though scarce asset. RB-66Cs could detect and analyze emissions from the newly supplied Soviet radars in North Vietnam while RB-66Bs jammed them and protected USAF and USN strike flights. Raven ECM operators became some of the most highly skilled and valued crew men in the Air Force. RB-66s also became useful as Pathfinder aircraft, leading strike packages to targets with their superior K-5 bombing navigation systems in typical SE Asian monsoon conditions when visual bombing was impossible.

So great was the need for Destroyers to cover operations in North Vietnam and Laos that repeated requests for extra aircraft led to the conversion of 52 RB-66Bs (already retired to the desert ‘boneyard’) into EB-66Es with additional jammers. Nevertheless, the long-planned retirement cycle continued and it was fortuitous that enough RB/EB-66s remained in service to protect the large B-52 formations involved in the Operation Linebacker in 1972. Spares shortages (a consequence of the retirement program) and airframe fatigue made a nightmare out of keeping the dwindling Destroyer fleet in action from its bases in Thailand. Massive increases in North Vietnam’s air defenses by 1972 forced the RB/EB-66s to patrol at increasing distances from targets for their own safety. They still managed to achieve impressive sortie totals, saving many B-52s and tactical aircraft from destruction right up to the end of the conflict.

Post-war, the survivors returned to Shaw AFB and to Bitburg AB. Germany where they boosted a small NATO EW force until 1974. There was then a long hiatus in which the USAF had no dedicated tactical EW aircraft until 1981, when the EF-111A Raven (also a conversion of a bomber type) entered service. Together with the US Navy’s existing EA-6B Prowlers these aircraft extended and refined the EW capability established by the Destroyer fleet, taking the anti-radar war into a new conflict in the 1991 Gulf War. As Adm. Thomas Moore, chair of the Joint Chiefs of Staff commented, “If there is a World War III the winner will be the side that can best control and manage the electromagnetic spectrum”.

As a tale of rapidly adapting existing equipment and tactics to meet unexpected challenges the B-66 story is unique. In service, the aircraft performed covert tasks that separated their crews from the highly publicized fighter and bomber operations in SE Asia and during the Cold War. However, they provided invaluable service and were exposed to considerable danger on many occasions. I hope that this book will help to make their achievements more widely known.

B/EB-66 Destroyer Units in Combat is out now. Order your copy from the website to read more!