On the blog today, Brian Lane Herder examines several Allied naval strikes on Japan and recounts how his latest title, The Naval Siege of Japan 1945, came to be. 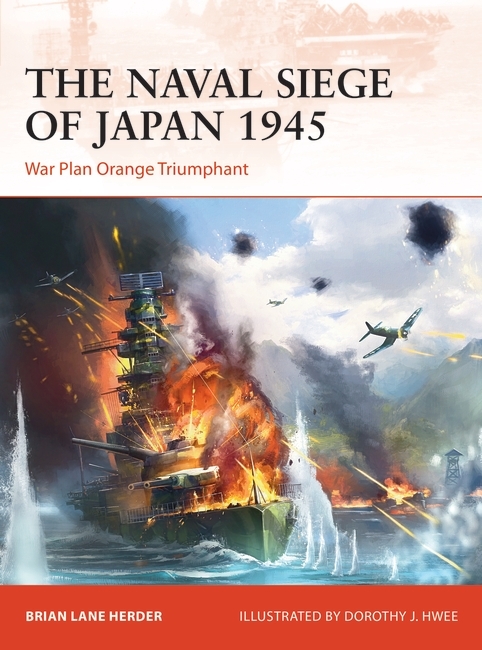 One incident of World War II that had always fascinated me was the American battleship bombardments of Japan in July and August 1945. Less than four years earlier Japanese air and naval forces had utterly devastated US power at Pearl Harbor, the Philippines, and the Java Sea. Few conflicts in human history have seen such dramatic turnarounds in national fortune in such short time – for me the US battleship shellings of the Home Islands perhaps symbolize this reversal more than any other episode. However, very little is available in commercial print on the subject, with the US carriers’ heavy strikes against Japan also receiving surprisingly little treatment. Unable to find a detailed, single-volume history specifically dedicated to the 1945 US naval attacks on the Home Islands, I decided to research the events myself. Osprey fortunately commissioned me to write a Campaign series entry on the subject.

The initial US carrier strikes on Japan began in February 1945 in support of the Iwo Jima operation. The following month US carriers pre-emptively struck Japan in preparation for the Okinawa landings, but two carriers – Wasp and Franklin – suffered horrendous damage from Japanese air attacks. From April through June the US carriers supported the ongoing Okinawa operations by striking airfields in nearby Japan when necessary. Finally, by July 1945 US carriers and battleships, supported by their British counterparts, commenced a sustained close blockade and bombardment of Japan. In addition to the land strikes, US cruisers, destroyers, and submarines aggressively swept Home Island waters prowling for Japanese warships and merchantmen. One US submarine famously even “invaded” Japan and “sank” a train. Finally, an initially contentious USN plan to mine Japanese waters with B-29 bombers proved thoroughly devastating.

The heavy Allied naval strikes on Japan began on July 14 and continued until Japan’s unofficial surrender on August 15. These were in fact the initial phase of Operation Olympic, the planned November 1945 US invasion of Kyushu. To give the proper context for the July-August attacks, I spend several pages describing Operation Olympic’s naval plans. The result is, by design, hopefully the most detailed and authoritative description of the proposed Olympic landings the reader will run across in commercial print.

Simultaneous with the heavy carrier strikes, there were five Allied battleship bombardments of industrial sites on the Home Islands: two against Kamaishi and one each against Muroran, Hitachi, and Hamamatsu. British battleship King George V participated in two bombardments, with Hamamatsu the last time a British battleship ever fired her big guns in anger. The largest battleship bombardment of Japan was the night of July 17/18, when six Allied battleships (five American battleships and King George V) made a single 55-minute pass against the industrial and electronics-producing city of Hitachi.

After the war it was found that a 16-inch battleship shell destroyed or damaged only about one-fourth the factory area of a roughly equivalent 2,000-pound bomb. However, extensive postwar examinations and interviews revealed an entirely unforeseen consequence of battleship bombardments. Put simply, to those on the receiving end, getting shelled by a battleship proved far more terrifying than getting bombed by either single-engine carrier planes or B-29 strategic bombers. While both German and Japanese civilians would apparently tolerate dozens of heavy bomber raids on their city with admirable stoicism, battleship bombardments generated utter panic-stricken hysteria. Several mid-sized Japanese cities were virtually depopulated the day after being shelled, with up to 30,000 Japanese civilians observed fleeing Hitachi for the countryside the morning after Allied battleships pounded the city - this from a city that had endured over 30 air raids.

The most controversial operation against Japan was Third Fleet’s naval air strikes against Kure on July 24-28. Virtually the entire surviving Combined Fleet was anchored there and largely immobilized by lack of fuel and repair. In short, most of the surviving Japanese heavy units were worthless. The USN high command was nevertheless obsessed with avenging Pearl Harbor by annihilating the Imperial Japanese Navy. Over the objections of McCain and his staff, Nimitz and Halsey ordered the US fast carriers to obliterate the remaining Japanese carriers, battleships, and cruisers at Kure. Unfortunately for the Americans, by July 1945 Kure was quite possibly the most heavily-defended target in the world, and American losses unfortunately bore this out. Additionally, Nimitz and Halsey routed the British planes to secondary targets well outside of Kure not for any strategic or tactical reason, but simply so that the USN could claim to have destroyed the Imperial Japanese Navy all by itself. This single distasteful episode stands as the campaign’s one sour incident between the two allied navies, which otherwise cooperated magnificently.

The sheer size and effectiveness of the Allied naval strikes against the Home Islands was staggering. For example, a postwar USAAF study revealed that just a few US carrier squadrons inflicted more damage on Tokyo’s giant Musashino-Tama aircraft plant in a single February 1945 raid than the first 800+ B-29 bombers managed against it in five months. Perhaps most astonishingly, in the final month of hostilities (mid-July to mid-August 1945) twenty total US and British fleet carriers hurled over 11,000 offensive sorties against Home Island targets.

One naturally asks, “Why has such a huge and effective naval campaign gone largely unreported since 1945?” After giving the issue much thought, I can only come up with one plausible explanation. Until recently, most English-language naval histories of the Pacific War probably began by consulting historian Samuel E. Morison’s magnificent (if imperfect) 15-volume History of United States Naval Operations in World War II, published between 1947 and 1962. To his credit, immediately after Pearl Harbor Morison obtained Roosevelt’s permission to accompany the USN on campaign so that he could be present at the events he was writing about (inspired by Thucydides, no doubt). In the spring and summer of 1945 Morison just happened to be with the US invasion fleet off Iwo Jima and Okinawa, not with the US Fast Carrier Task Force. Not surprisingly, Morison naturally spends most of his final volume, Victory in the Pacific 1945, describing the Iwo Jima and Okinawa operations he was present for, with the Allies’ heavy carrier and battleship raids on Japan not entirely ignored but receiving considerably less attention and detail. In the decades to follow, most naval historians probably just followed Morison’s admittedly authoritative lead and focused on Iwo Jima and Okinawa rather than Japan.

What this means is that there are even now relatively few secondary sources on the 1945 Home Islands naval campaign. But this also provides an opportunity. Not only was a major American World War II campaign still relatively unplowed territory (virtually unheard of in 2020), but the dearth of secondary sources meant The Naval Siege of Japan 1945 was by necessity assembled almost entirely from primary sources. Among these were over sixty USN operational reports, plus many US government studies conducted immediately postwar, including the extensive United States Strategic Bombing Survey. Another excellent primary source was Admiral Halsey’s own 1947 autobiography, which proved just as colorful and straightforward as the man himself. Several of the battleship bombardment narratives were filled out by vivid first-person accounts I was lucky enough to find – these include not only those Americans doing the shooting, but also by various Japanese troops, Japanese civilians, and American POWs getting shot at.

My goal in researching and writing this book was to document every single naval raid and operation against Japan’s Home Islands in the decisive year of 1945. I hope the reader enjoys the detail, and I hope I have gone just a little way toward bringing some much-deserved recognition to an extraordinary but curiously forgotten World War II campaign.

Order your copy of The Naval Siege of Japan 1945 from the website now.