Brian Lane Herder's latest New Vanguard title, US Navy Battleships 1895–1908 is the epic story of the American battleships that turned the US Navy into a global power, and were made famous in the cruise of the ‘Great White Fleet’. In today's blog post, Brian examines the Fleet and President Theodore “Teddy” Roosevelt, the man who came with the idea of The Great White Fleet’s world cruise. 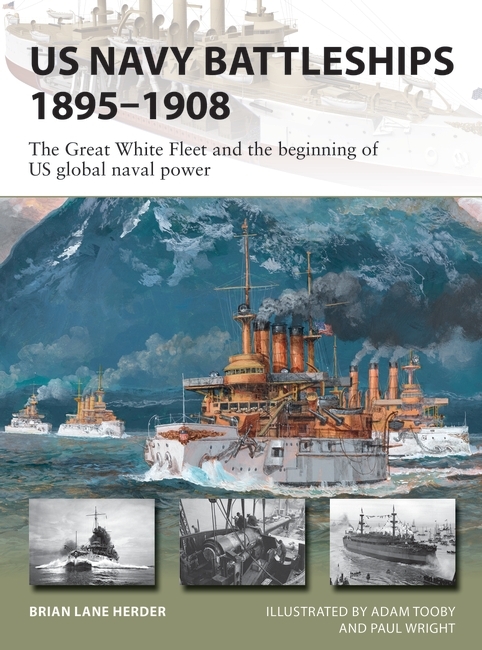 The Great White Fleet’s world cruise was almost entirely the idea of President Theodore “Teddy” Roosevelt. Teddy Roosevelt was one of the most remarkable figures in American history. The 26th President of the United States was born in Manhattan, New York on October 27, 1858 to a wealthy and aristocratic Dutch family. Roosevelt had a sickly childhood, and throughout the rest of his life he pursued “the strenuous life” to compensate. From an early age, Roosevelt proved a true polymath of towering intellectual and physical ability. Unfortunately, space prevents Roosevelt’s full talents and accomplishments to be listed here, but during his life he was variously a scientist, historian, rancher, boxer, hunter, explorer, and linguist.

By the April-August 1898 Spanish-American War, Roosevelt had climbed the US political ladder to Assistant Secretary of the Navy. In late April, Roosevelt directly ordered Commodore George Dewey’s Asiatic Squadron to invade Manila Bay, in what proved a spectacular victory. Desperate to see combat, Roosevelt quickly resigned his government position to join the New York National Guard cavalry. After simply forcing his way aboard the transport at Florida, Colonel Roosevelt and his “Rough Riders” found themselves in Cuba. It was here on July 2, 1898 that Roosevelt won the Medal of Honor for his courage and leadership under Spanish fire at San Juan Hill. Roosevelt later confessed that the Spanish-American War “wasn’t much of a war, but it was the only one we had.” Now a genuine war hero, by 1901, the meteorically ascending Roosevelt had become Vice President of the United States. When President William McKinley was suddenly assassinated in September 1901, the 42-year-old Roosevelt became the youngest President in American history.

As President, Roosevelt took a direct hand in US naval matters, just as he had in 1898. When, in 1901, Lieutenant William Sims wrote Roosevelt directly concerning the wretched state of US naval gunnery, Roosevelt ordered Sims’ reports circulated throughout the entire US Navy. After observing a secret 1902 gunnery practice where American marksmanship proved deplorable, Roosevelt named Sims “Inspector of Target Practice” and had Sims visit each US warship lecturing about how to improve gunnery methods.

In February 1904 the Russo-Japanese War broke out, and within months the Japanese had largely destroyed the Russian Empire’s Pacific fleet. On October 15, 1904, eleven Russian battleships of the re-named “Second Pacific Squadron” departed Baltic ports bound for the Far East. After a grueling 18,000-nm journey, the Russian fleet – low on training and morale to begin with – was suffering horribly from the voyage. The smaller Japanese fleet - better trained, in much better material condition, and fighting in its own back yard - intercepted and decisively destroyed the Russian fleet at the Battle of Tsushima on May 27-28, 1905.

On September 5, 1905, Japan and Russia signed the war-ending Treaty of Portsmouth. Roosevelt, who had brokered the peace conference, was awarded the Nobel Peace Prize. However, Japan had suddenly established herself master of East Asian waters and the only obvious challenger to the USN in the Pacific. For Roosevelt, the parallel between the Russian Second Pacific Squadron and the USN’s Atlantic-based battleship fleet was obvious. If the Japanese fleet could lie in wait and smash a larger Russian battle fleet after it had traveled across half the world, then the same thing could happen to the Americans. Roosevelt was adamant there would be no American Tsushima due to distance, morale, or poor technology or maintenance. In 1907 Roosevelt ordered the powerful US Atlantic Fleet to steam around the world as a technological and diplomatic showpiece. Roosevelt stated, “I became convinced that it was absolutely necessary for us to try in time of peace … and not in time of war.”

On December 16, 1907, Roosevelt watched the Great White Fleet depart Hampton Roads from the presidential yacht Mayflower. The Fleet’s ports-of-call are too numerous to recount here, but the Fleet ultimately made its way south through the Caribbean and down the Atlantic coast of South America, before transiting the Strait of Magellan and reaching the Pacific in February 1908. After cruising up Latin America’s Pacific coast, the Great White Fleet reached California in April 1908, before transiting the Pacific and visiting Australia, the Philippines, Japan, and China in the latter half of 1908.

After numerous port calls in the Indian Ocean and the Mediterranean, the Great White Fleet steamed back into Hampton Roads, Virginia on February 22, 1909. Roosevelt was there to personally greet it. The battleships’ journey had taken 14 months and six days, while visiting 20 ports on every continent but Antarctica. The cruise proved spectacularly successful, with the reliability of both ships and men far exceeding expectations. Nevertheless, as Roosevelt had planned, the cruise exposed numerous technological and logistical issues, which the USN immediately set about correcting.

A month after the Fleet returned, in March 1909, Roosevelt’s second term expired and he was replaced as President by his former vice president, William Taft. The progressive, populist Roosevelt shortly became deeply dissatisfied with Taft's administration, and in 1912 Roosevelt ran for President again, this time on a third-party ticket. Roosevelt’s entry against Taft effectively split the Republican vote, allowing Democrat Woodrow Wilson to win the Presidency.

Between December 1913 and April 1914, Roosevelt co-led a scientific expedition up the unexplored Rio da Dúvida in the Amazon basin. The expedition was successful, but Roosevelt himself nearly died. By 1917 the ailing Roosevelt was begging to be allowed to fight in World War I, even as a private. There was no chance of this happening. President Wilson – whom Roosevelt publicly despised – refused to allow it.

Roosevelt never fully recovered from the Amazon expedition. He died on January 6, 1919 at the age of 60. After performing secondary roles during World War I, most of Roosevelt’s Great White Fleet battleships barely survived him, with most scrapped and the remainder disarmed and relegated to auxiliaries. The two Mississippi-class battleships however, were sold to Greece. They were eventually sunk in Salamis harbor on April 23, 1941, the victims of Stuka dive-bombing attacks.

Despite the participating battleships’ largely inglorious ends, the Great White Fleet was one of the great peacetime triumphs of the pre-dreadnought era. Its famous worldwide cruise remains one of the most celebrated accomplishments of the United States Navy.