Today we're looking at the Soviet Winter Infantry plastic boxed set from Warlord Games, along with a painting video from Pete the Wargamer and a great reference image from Men-at-Arms 216: The Red Army of the Great Patriotic War 1941–45.

Using this boxed set from Warlord Games, you'll be able to put together 40 Soviet Infantry in Winter gear, well prepared for freezing conditions of the Eastern Front. There are a wide range of weapons included, so your men will be well-equipped as they face off against the Germans at Stalingrad.

If you're looking for a suggested painting scheme for these figures, check out this fantastic video from Pete the Wargamer, where he takes you through the entire process of painting one of these figures from start to finish!

We can also examine the equipment of the Red Army at the Battle of Stalingrad in a little more detail with this short extract and illustration from Men-at-Arms 216: The Red Army of the Great Patriotic War 1941–45 by Steven J. Zaloga, with illustrations by Ronald Volstad. 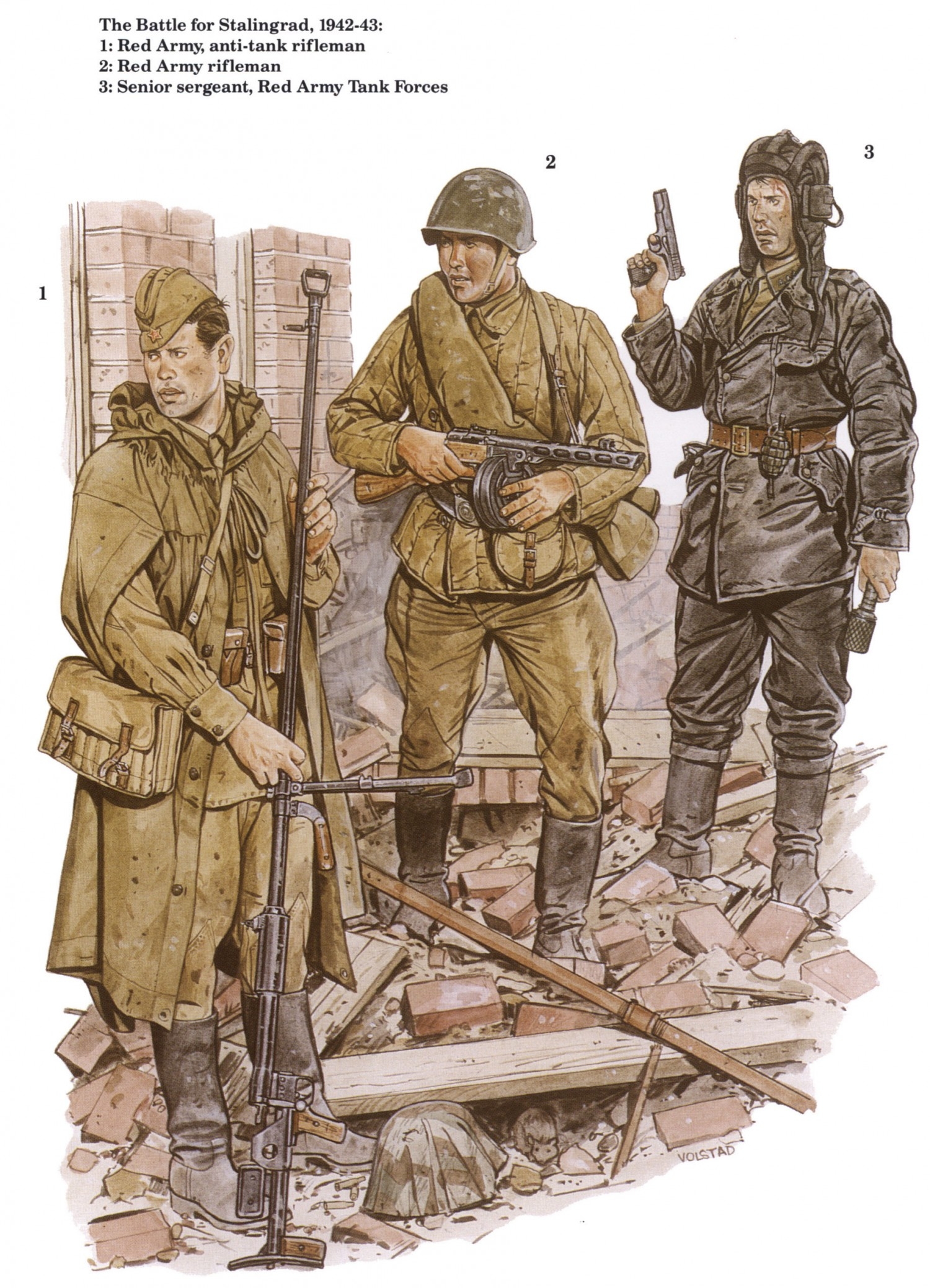 This rifleman is equipped with the PTRD 14.5mm anti-tank rifle, capable of penetrating most German tanks up to 1943 if used at very close ranges. The Germans introduced spaced armour on the front of some tanks, like the PzKpfw III, to reduce the effectiveness of these rifles; the spaced armour tended to break up the projectile. He is wearing the plashch-palatka rain cape/shelter half and a normal pilotka sidecap. The PTRD was usually operated by a two-man team, since the long barrel made it very difficult for a single soldier to carry it. The rifle was supplied from a 20-round cartridge pouch, carried either by the rifleman or his No. 2. There was an anti-tank rifle platoon in each rifle battalion, with six PTRD or PTRS rifles.

By Stalingrad the telogreika padded jacket had become common, even in areas where the winters were not particularly severe, as around Stalingrad. This rifleman wears the telogreika without the accompanying padded trousers, wearing the normal khaki sharovari instead. He has his plashch-palatka cape rolled up, bedroll fashion over his chest. He is wearing the standard Model 1940 steel helmet.

The winter-issue tanker's dress basically consisted of a black leather jacket and trousers worn over the normal winter-issue wool gymnastiorka and trousers. From the three triangles on the collar tabs, this tanker is a senior sergeant. Although tankers could carry small arms, as often as not they were not carried outside the tank. As seen in Plate C3, tankers in extremely cold regions could also be issued warmer clothing, such as shuba sheepskin coats.

We hope that this has helped as you prepare for Bolt Action: Campaign: Stalingrad, publishing on 30 April. Next up we'll be taking a look at the Winter Germans Boxed Set!