On the blog today, Peter Ingman gives a brief overview of the clashes between the Curtiss P-40E Warhawk and Mitsubishi A6M2 Zero, the subject of his latest book P-40E Warhawk vs A6M2 Zero-sen. 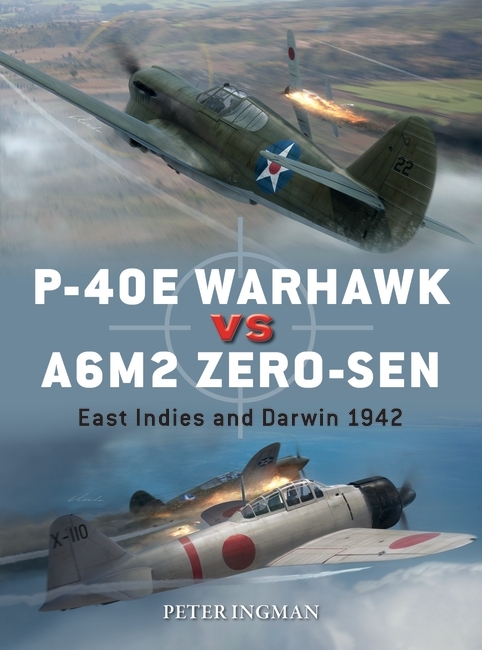 The Curtiss P-40E Warhawk and Mitsubishi A6M2 Zero are two classic World War II fighters with vastly differing reputations. In the first year of the Pacific War, the Zero swept all before it and was both feared and respected by Allied pilots. Indeed, by March 1942 the Japanese had secured a string of quick victories that were relatively cheap in military terms. Often, it was the Zero that was at the vanguard of these campaigns. Due to its exceptional range, it was a superb offensive weapon and time and time again caught Allied aircraft unprepared or on the ground.

In comparison, the P-40E can’t be credited with any major victories. Especially when compared to the newer Allied fighters that became available from 1943 onwards, the P-40E was decidedly modest. Never intended as an interceptor, it had a sluggish climb rate and its performance fell away markedly at medium altitudes and higher up. Weighed down with armament, armor, and other equipment the P-40E was heavy, which at least meant that it could out-dive the lightweight Zero. Otherwise, the main advantage of the P-40E was that it was available when most needed in the first year of the Pacific War.

In the early days of 1942 comparisons of pilot quality was heavily stacked in favor of the Japanese. Quite simply, the key Imperial Japanese Navy land-based fighter units, the Tainan Kokutai and 3rd Kokutai, were at the top of their game. Filled with veteran pilots with years of combat experience over China, these were truly elite units whose skills and teamwork were among the best in the world. Meanwhile, many of the pilots of the United States Army Air Corps who would face the Japanese were fresh out of flight school. However, in general the USAAF pilots were well-led by some long serving officers. For example, the 49th Fighter Group commander, Major Paul “Squeeze” Wurtsmith, had been flying since 1928 and had accumulated some 4,800 hours of flying, most of which was in fighters. Wurtsmith would subsequently prove to be an outstanding leader.

The brief aerial campaign over the East Indies and then the 1942 campaign over Darwin shared continuity in the same group of American pilots battling 3rd Kokutai Zeros with P-40Es. Several of these pilots had P-40E experience from the Philippines in December 1941 where they experienced how difficult it was to defend airfields against Zeros which could appear in strength at just about any time. While the USAAC Far East Air Force in the Philippines was soundly beaten, some hard-won lessons were learnt about the need for dispersing fighters to camouflaged fields and the danger of dogfighting with the ultra-maneuverable Zero.

Subsequently, the Philippine veterans were used to form fighter squadrons in Australia using hastily assembled P-40Es. It was intended that they would return to the Philippines, but when that route was cut, they were diverted to Java instead. There the Americans had the advantage of a camouflaged fighter strip unknown to the Japanese, and during February 1942 the 17th Pursuit Squadron (Provisional) provided a functional fighter defense over eastern Java.

However, the Americans learnt the difficulties of using the slow-climbing P-40E as an interceptor. Again and again, they rose to meet high-flying Japanese formations only to face Zeros holding an altitude advantage. Without the benefit of radar or some other extended warning, the American task was next to impossible. In addition, the P-40Es had only a shoe-string maintenance organization to support them. After a short time, their engines became worn and performance was degraded. By March, the squadron evacuated to Australia bringing with it some valuable combat experience.

Meanwhile, Paul Wurtsmith’s 49th Fighter Group had arrived in Australia – it was the first full FG to leave the US. Although containing many rookie pilots, the 49th was quick to make use of the Philippine and Java veterans. Some of these became specialist P-40E instructors while many others were welcomed into squadrons as flight leaders.

By this time Darwin had been devastated by a huge carrier raid on February 19 and it seemed further assaults on this northern frontier town were likely. Accordingly, in April the 49th FG was rushed to newly constructed fighter strips along the Stuart Highway to the south of Darwin. For the next six months these aircraft would defend the area against Japanese aircraft operating from bases in the Netherlands East Indies such as Timor. The raids were conducted by Betty bombers escorted by 3rd Kokutai Zeros. On several occasions some very large-scale air combats took place, involving dozens of fighters from each side.

Fortunately, the Americans had the advantage of radar, which generally gave them just enough time to scramble and reach the altitude of the intruders. In April, the Americans scored some easy victories. Not expecting significant fighter opposition, the Japanese made the mistake of flying at medium altitude and with modest numbers of Zero escorts. This was quickly remedied and for the remainder of the campaign the Americans entered the fight at high altitude, where the P-40E’s performance suffered, and against large numbers of Zeros.

By all accounts, the 49th FG should have been largely annihilated, facing superior fighters and pilots and in a flight envelope least suited to the P-40E. However, under the expert leadership of Wurtsmith, the Americans proved to be quick learners. Refusing to be drawn into dogfights, the Americans adopted “dive and zoom” tactics which made use of the faster diving speed of the Curtiss fighter. Wurtsmith also gave his flight leaders the freedom to attack if circumstances were favorable, a tactic usually derided as attacking in “penny packets” but something that worked well in the northern Australian environment. While many P-40Es were lost to Zeros, the advantages of a sturdy armored aircraft and fighting over friendly terrain meant the number of 49th FG pilots killed in combat was unusually low: just four.

By September 1942, the end of the Darwin dry season brought an end to the air campaign. It would be fought again in 1943, but by RAAF Spitfires, as the 49th FG was by then in New Guinea. Overall, the 1942 air battles over the East Indies and Darwin provide a fascinating insight into two famous adversaries: the Zero and the P-40E Warhawk.