RPGs, wargames, and Westerns - what have the Osprey Games teaam been up to this week?

This week I played the End of the World, and I’d argue that apocalypse scenario was probably worse than our current one. I found it profoundly strange to do what this game asks of you: to play as yourself. Of course, the first step is to stat yourself. After a lot of furrowing of my brow I gave myself high logic and empathy stats, middling dexterity, and low charisma, willpower, and vitality. After that, we had to give ourselves a bunch of positive and negative traits, with mine including ‘analytical’ and ‘awkward’. The truly strange final moment of character creation is when the other players vote on how accurately you’ve stated yourself, and can modify it. My friends very generously thought I should have higher charisma, but in return I had to take another negative trait. An almost surreal experience. Once we starting playing, things got real real quick. We found ourselves in one of my go-to pubs in Oxford, and one of my friends (the GM) got himself a-murdered by a frenzied zombie. We managed to flee onto a rooftop and make our way onto a back street. From there, we navigated down back streets away from where the zombies seemed to be coming from, largely unnoticed. Well, at least until my friend set off a car alarm that attracted a zombie that scratched him up – and nearly did much worse, if the rest of us hadn’t jumped in a pulped it. Tragically, though we didn’t realise it at the time, the damage had already been done. Some time later, while taking temporary refuge in a café, said friend lost his mind and jumped upon us, trying to devour us. Our escape was a close thing.

In the end, two of us made it out in the back of a mutual friend’s car, passing through the military barrier erected around the city. While we were grateful to have made it out of the immediate danger, the fact that we were able to leave without screening or quarantining didn’t make me hopeful for the containment of the zombie disease…

We're moving from zombies to... World War II Zombies. After finishing my Burrows & Badgers miniatures last week, I made the logical next step and painted up some German Totenkorps from Warlord Games. We had been talking  about playing a World War II cooperative Zombie Survival game in the office before we all got sent home, so I figured I'd take the time now to prepare for that so we can crack on with it when we are all back! 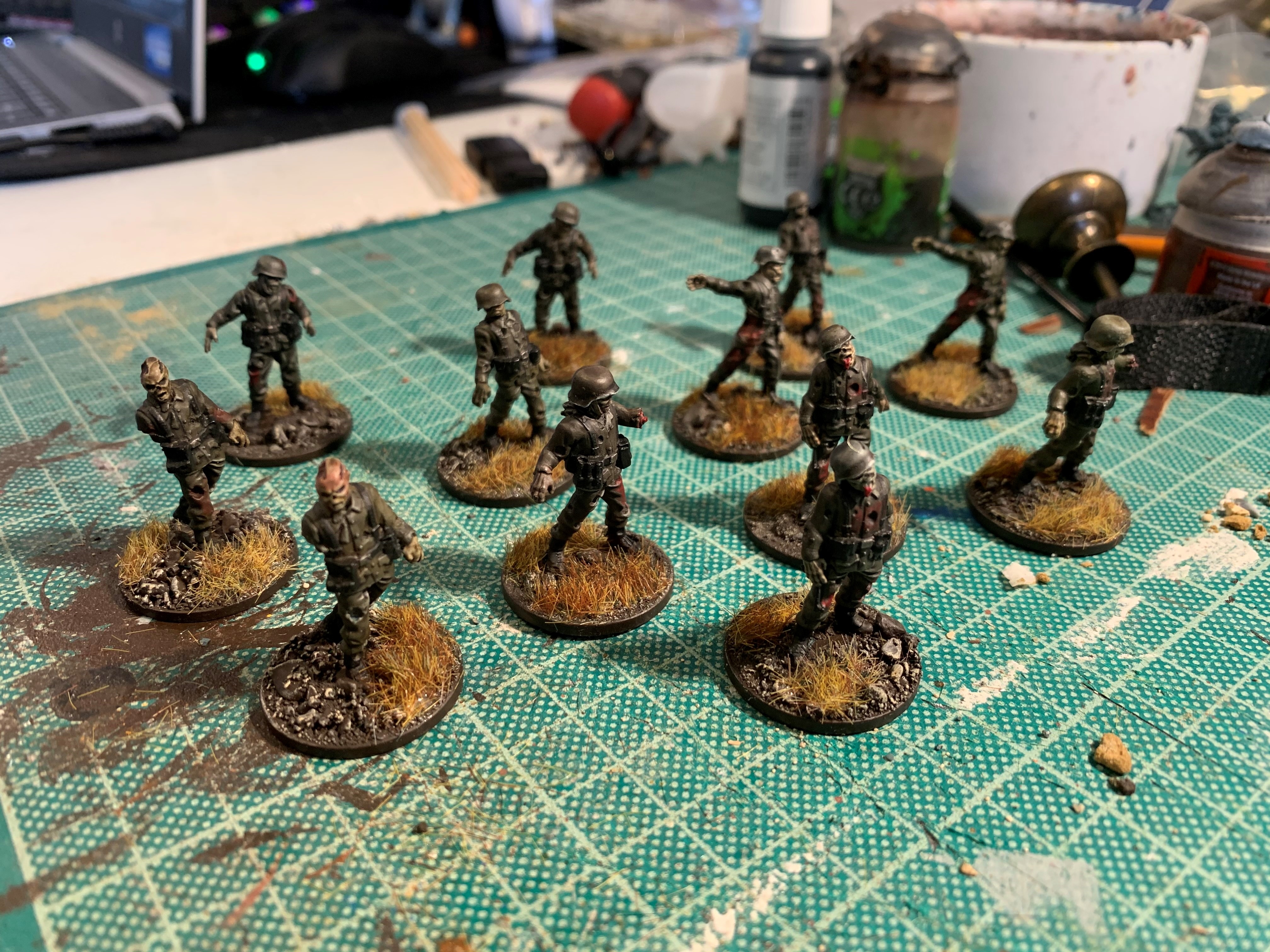 I had been struggling to find time to paint my miniatures - now I'm struggling to work out what I want to work on next! I usually rely on playing games to prompt me to work on something, but obviously opportunities for that are limited at the moment. I have a list of things to work on that include my Oathmark army, some 15mm ACW miniatures for Altar of Freedom, some 15mm Finnish WWII troops for Bolt Action and Chain of Command, and all the figures from the North Star Muskets & Tomahawks: Second Edition Nickstarter

Not much of an update from me this week! My pikemen have advanced from ‘unpainted’ to ‘basecoated’, though I am hoping to get a lick of paint on them this weekend.

That’s not to say that this week has been devoid of hobby…ness. My attention just hasn’t been on the project I’d already started. This is not an uncommon situation in which I find myself. Rather, I’ve recently picked up a few bits and pieces of inspirational reading which are now piled at the side of my bed next to the notebook in which I scrawl ideas, random thoughts, and (occasionally) things that have piqued my interest. 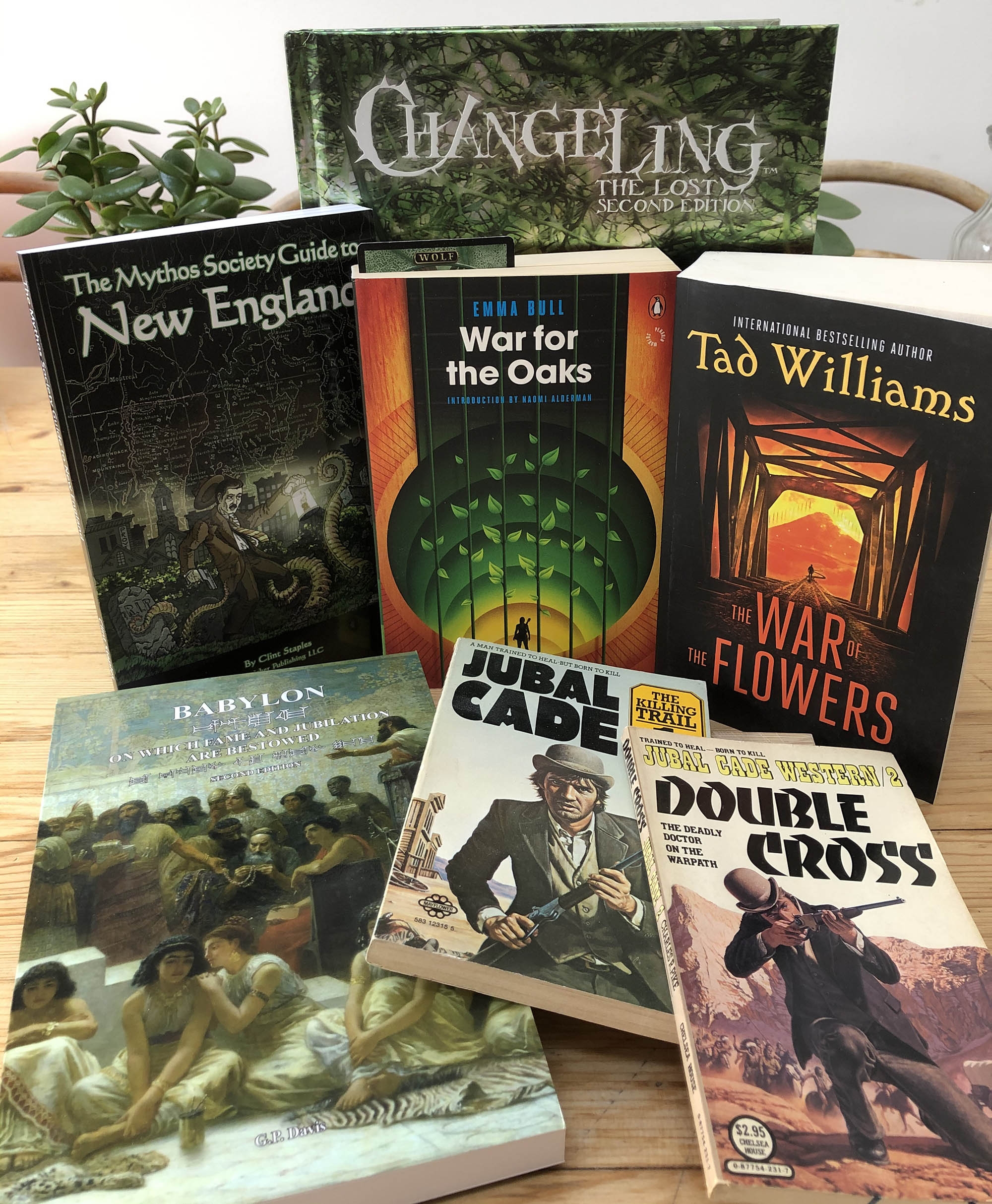 So, fair to say that I’m not necessarily looking at these as sources of inspiration for a single project so much as a random selection of things that are currently of interest. That said, a game dealing with a Spaghetti Western-style gang war between Mythos and Fae cults in ancient Babylon sounds amazing… and terrible.