As you prepare to play Oathmark: Battles of the Lost Age, you may be wondering what you need to play the game. Here's an extract from the book looking at what is required in a little more detail.

Apart from the book, you need several other items to play Oathmark: miniatures, a table, terrain, dice, some sort of measuring device, and copies of the Kingdom Sheet and Army Sheet from the back of this book. Each of these items is discussed in detail below.

Miniatures are the key elements of the tabletop wargaming hobby. Essentially, miniatures are toy soldiers, sculpted to a high level of detail and cast in either metal or plastic. Official Oathmark miniatures are produced by North Star Military Figures and Osprey Games and can be purchased from your local hobby store or online from www.northstarfigures.com. 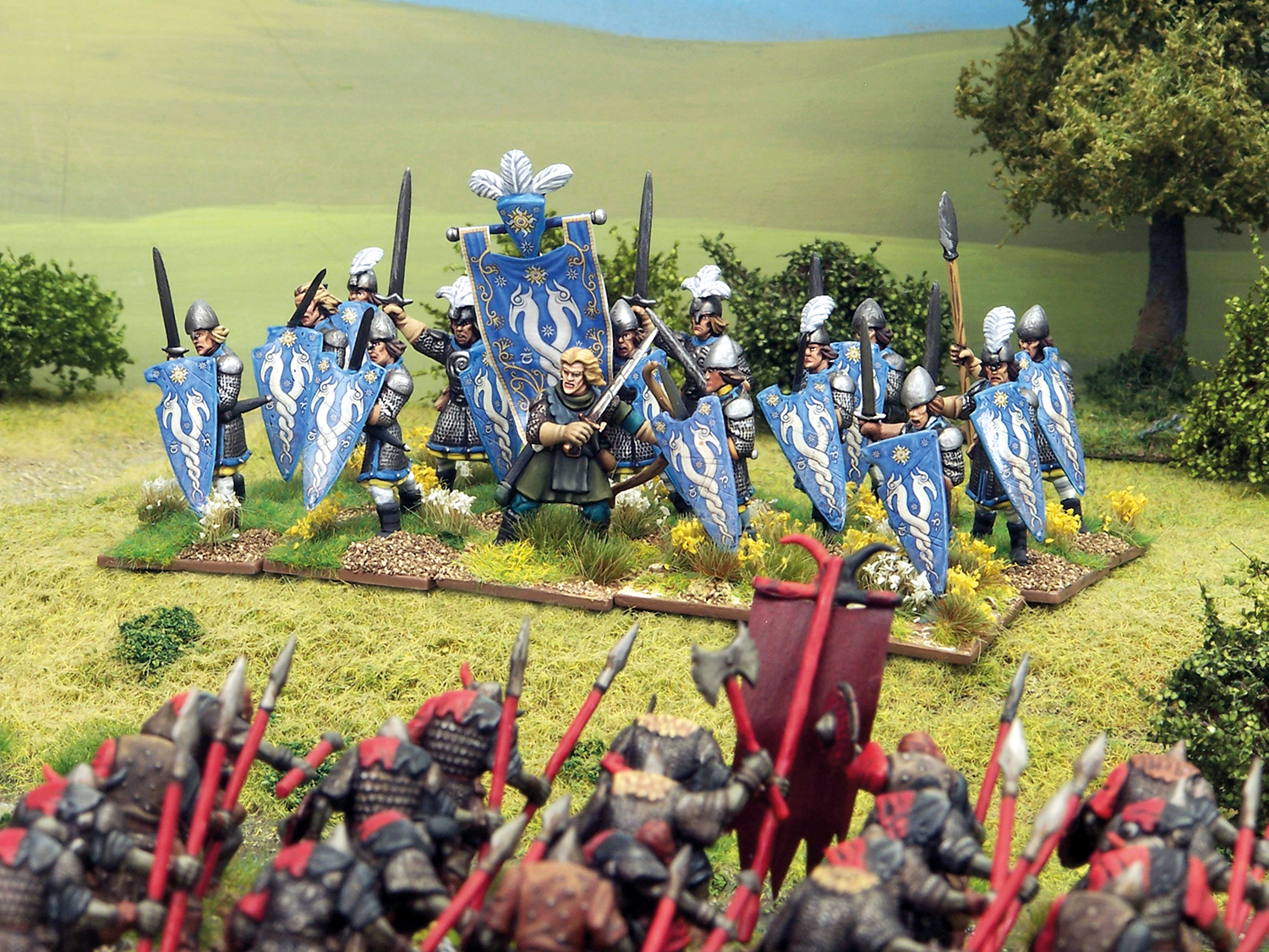 Each miniature in Oathmark represents one man (or elf, goblin, troll, etc.), and is usually referred to as a figure. Most figures are grouped together with other similar figures into blocks called units. All figures and units under a single player’s command are known as an army. This is explained in more detail later.

To play to the game, each player needs their own army with a minimum of about 30 figures, the number that comes in one box of plastic Oathmark Dwarf, Goblin, Elf, or Human Infantry. After playing a couple games at this basic level, however, most players decide to expand their armies to contain numerous different units with varying strengths and abilities. That’s fine; the Oathmark rules work just as well for armies of 300 figures as they do for armies of 30.

It is worth noting that all Oathmark miniatures come unpainted and, in the case of plastic figures, unassembled. So, if you are just starting out, you may also want to invest in some glue, paints, paintbrushes, and other such hobby tools.

A Note on Base Size

Every Oathmark figure comes with a plastic base; in the case of human-sized models, this is a 25 x 25mm square. Larger figures may have larger bases. It is important to mount your figures on the appropriate-sized base, as this represents how much area that figure takes up and controls on the battlefield and affects how the figure moves and fights, especially when it is part of a unit.  The base size of every creature in this book is listed in its description.

Veteran wargames, especially those who use armies from other games, may already have figures with different-sized bases. That is fine. Since most units in Oathmark are five figures wide, it is possible to construct movement trays to give a unit the correct footprint. So, if you have a unit of 10 human archers, you could make a tray 125mm wide by 50mm deep, and roughly organize the archers into two rows of 5 figures each. Even if you use Oathmark bases, you may want to consider using movement trays, as it is much faster to move a unit on a tray than to move each individual figure separately.

After miniatures, the most crucial item is a table. It is called tabletop wargaming, after all! Oathmark does not require a specific table size to play, but you do want to make sure you have enough room for the armies you are using. For example, you could play a game with 30 figures per player on a 2’ x 4’ table. A larger game, in which each player has 100 or more figures under their command, would require a larger table: something more like 4’ x 6’. 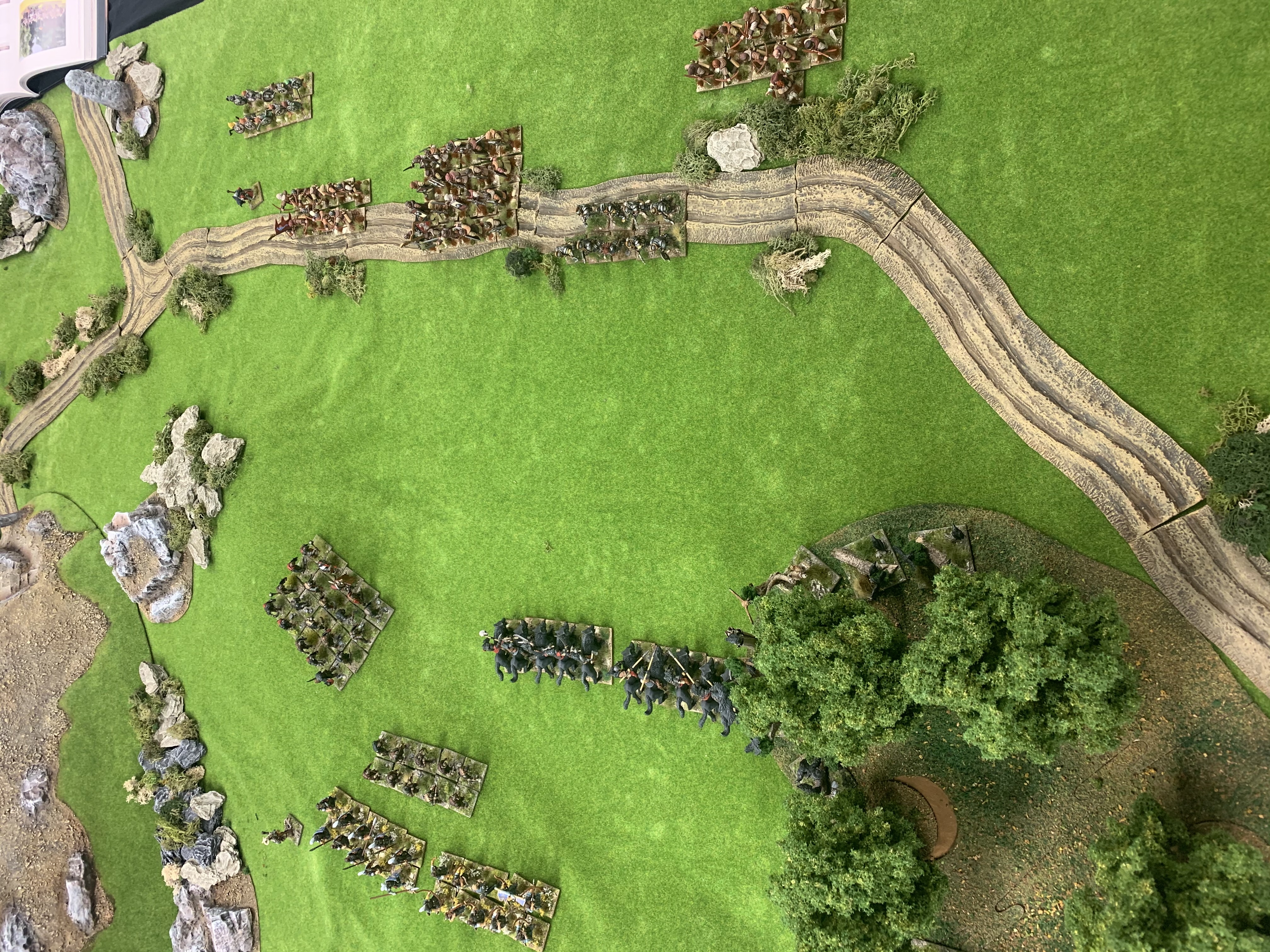 For most people, the decision on table size usually comes down to whatever is available. If this is the case, size your armies accordingly. You do not want huge areas of open table space, but you do want to make sure units have plenty of room to manoeuvre. At the end of the day, smaller tables make for shorter, bloodier games; larger tables allow for slower, more tactical battles.

Most wargamers like to cover their table with some kind of cloth to make it look more like a proper battlefield. Numerous companies sell specific battlefield cloths or mats that work wonderfully, but even a simple green sheet can make a huge difference to the look and feel of your game. The cloth also helps hold the figures in place and keeps them from sliding around on slick tabletops, which can cause minor problems.

While it is perfectly acceptable to play Oathmark on an empty table, most players find the game more visually appealing and tactically interesting when they include terrain. Terrain is any kind of scenery that sits on the table; it can include hills, rivers, villages, ruins, and even ancient standing stones covered in oathmarks left by some long-forgotten warlord. If you are just beginning in the hobby, you can start by using a couple of books to represent hills and a few rocks to represent boulders. This gives players a bit more to think about as they march their armies around the table, and provides some strategic points to fight over.

As you get deeper into the hobby, you may want to upgrade your terrain by either making your own (there are loads of how-to videos online) or by purchasing some of the amazing offerings available from a variety of scenery manufacturers. You can likely find a good selection of scenery available wherever you buy your Oathmark miniatures.

Most wargamers have a love/hate relationship with their dice. They are fun to roll and provide moments of high drama but somehow, they always seem to let you down when it really matters. Oathmark uses ten-sided dice, exclusively. Although these dice may seem uncommon to those new to the hobby, you can easily obtain them from North Star Military Figures or any other hobby dealer. Ten-sided dice are generally numbered 0–9, but the 0 is treated as a 10. Thus, whenever you roll a ten-sided die, it generates a random number from 1 to 10.

To play Oathmark, each player needs five ten-sided dice; ideally, four of one colour and one of a different colour. We call this differently coloured die the Champion Die. It is used in situations where you roll multiple dice but handle the Champion Die result slightly differently than the other dice results.

It is necessary to accurately measure distances when determining how far a unit can move or the range of a missile weapon. All distances in Oathmark are given in Imperial measurements, so you need a ruler or tape measure marked with inches and feet. Players can measure distances at any time during a game.

At the back of this book, you will find the Kingdom Sheet and the Army Sheet. These are essentially blank worksheets you can use to record all relevant information about your kingdom and a specific army. The Kingdom Sheet is generally used before a game, while you are building an army. The Army Sheet is a used during the game, allowing you to quickly locate important stats for your figures without having to flip through the book. You can download extra copies of these sheets from the Gaming Resources Page

Hopefully this has helped you prepare to lead your armies across the Marches in Oathmark: Battles of the Lost Age!