Søren 'Bloodbeard' Bay from Bloodbeard's Garage is back on the blog with a battle report for Zona Alfa, playing the game solo using some of his own house rules. Please note that official solo rules from designer Patrick Todoroff are in the works, but we always love seeing what people come up with in their wargaming!

"Okay Roaches, listen up. This is gonna be our first trip into the zone under my lead. We've been over the rules. Shut up, stay close, do everything I say. One of the guards owed me a small favor, nothing big, but we won't be disturbed.

We're going just inside the cordon, a BTR-80 and team have gone missing - they're toast. No doubt. The weather shifted and the thing has been covered in radioactive rain for days, the army boys ain't gonna get it back anytime soon.

Consider this a team work excercise, see if this team works out. Any loot we'll split between us. No rookie! Nothing for you or your friend. Your payment is your experience gained in a safe environment. You'll get some cash eventually - if you make it. So remember: Shut up, stay close, do as I say".

So my first 12AP team is going into the zone for the first time. I've chosen the introductionary scenario from the Zona Alfa rulebook, but I'll be playing the scenario solo using my own unofficial house rules.

The objective is to clear a small town of hostiles, get to a vehicle and retrieve any loot from it. There's a few zombies and mutated dogs roaming around the area.

Author Patrick Todoroff is currently working on official solo rules for the game, but I was so excited to give the game a try that I made a few tweaks before entering the zone solo.

In setting up this scenario I did read a bit wrong, only having two packs with a pair of dogs in each. It should have been four dogs instead.

The layout is a small town with a broken down military BTR-80 (a Russian APC) in the middle. In two random houses there are some nasty mutated dogs. Around the vehicle in the middle there's also four zombies - part of the military unit that went missing.

A roll on the weather table had this be a high radiation zone - so one less turn to get the job done. Six turns to clear the area and successfully loot the vehicle.

I used some of my red brick MDF buildings for the town and chose to set them up as single storey buildings. I added a few vehicles and a giant pile of junk. I imagine such junk piles all over the zone, left over from cleaning up roads and paths.

Unlike my other wasteland setups, I want an overgrown and swampy feel in this zone. So as a touch up to the board I add clumps of moss all over the place, as nature has started to take back the zone. And then a sprinkle of static grass, dirt, cinder blocks and twigs to add texture to the felt terrain. 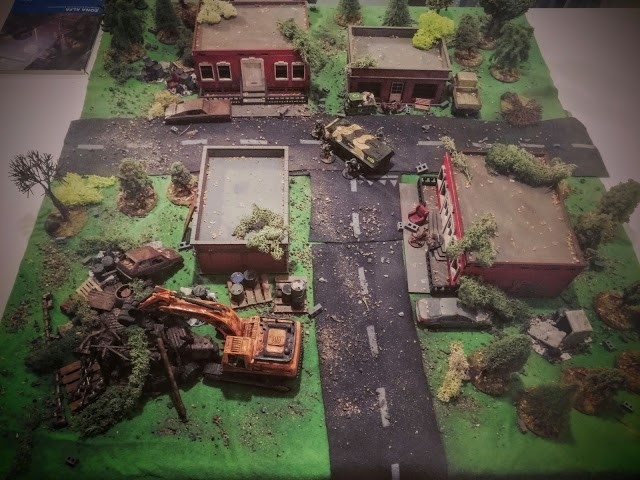 An abandoned excavator, last used to pile up contaminated junk. This is a little nod to the excellent A Roadside Picnic. 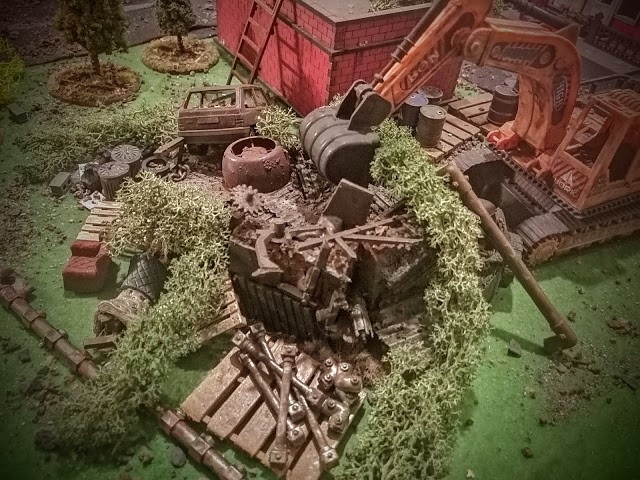 The BTR-80, Russian armored personel carrier and some zombies around it. These are actually sci-fi zombies from Mantic, painted in modern camo and with a few modern bits added (AK-47s and bergen rucksacks). 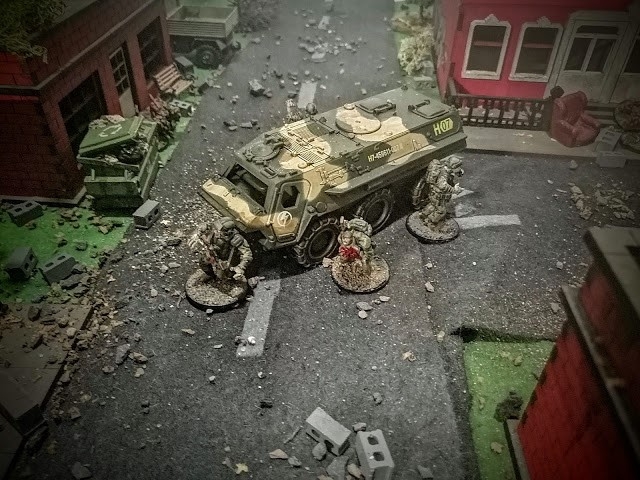 I split my squad into two teams and decided to roll a a dice for the corner to enter from. This way I can't take advantage of the map - and random is good when playing solo. Both teams had to enter the board from the top left corner. 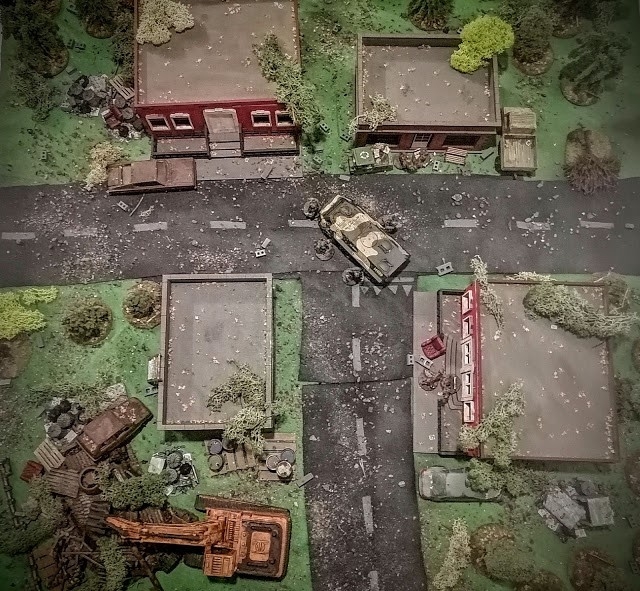 Some of those nasty dogs who roams the zone eating everything they can get close to. I should have doubled the amount of dogs, but only realized this after finished the game. 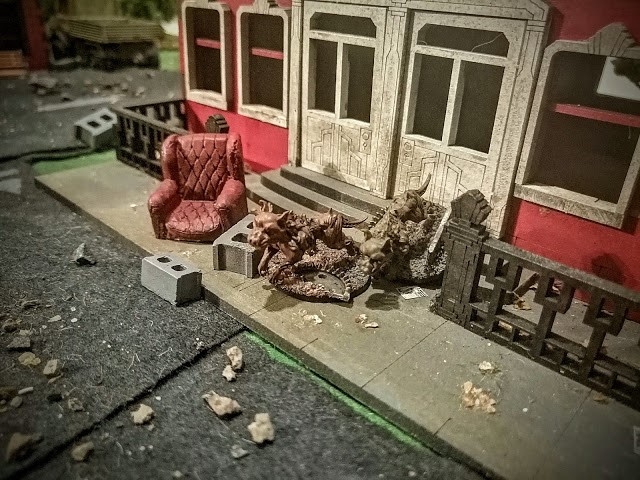 My team is entering the zone. Everything is wet from radioactive rain, they are close, this is their first zone run as a unit. There is my leader and his veteran friend, two hardened fighters, and finally two rookies - my Leader doesn't have a lot of money yet and rookies are free - paid with the experience they get. 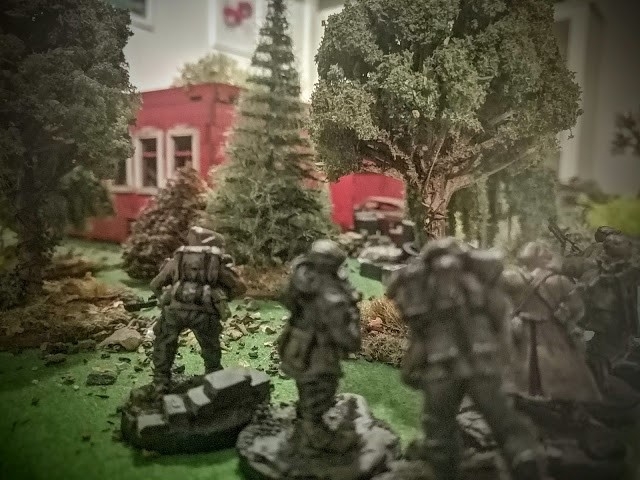 The unit quickly spreads out to form two flanks of attack. The veteran and hardened soldier armed with a light machine gun moved away from the others, staying hidden behind a house. The veteran has the hustle skill - very nice in the first turn - getting 2" more for moving into position. 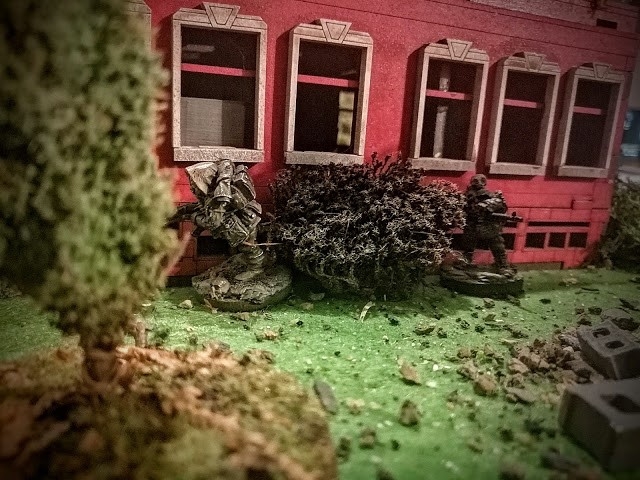 The rest of the unit moved on the other side of the building. The rookies fall a bit behind, but the leader gave an action point to one - giving him a bit of extra speed. They hug the cover to stay out of sight of the zombies.

Through the first turn the monster didn't intervene and take the turn. All my guys are out 12" away and outside of LOS anyways. The quiet before the storm... 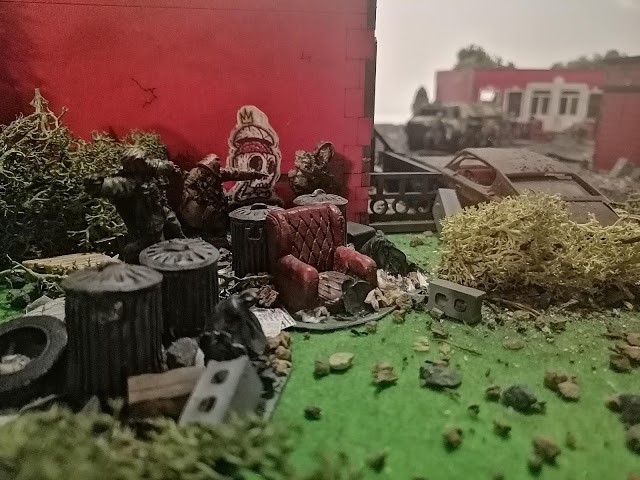 The second turn started with my bone-doc, a hardened trooper, moving behind a car and taking a shot a zombie. He managed to take one out with a clean headshot, but he rolls a fumble and gets a pinned counter - something is jammed in his old AK47 assault rifle.

I consider giving an extra action to one of the rookies, but they are terrible shots - and that would better used for the leader. So he stepped out of cover and fired his battle rifle twice, the red dot sight coming in handy. He takes out another zombie. 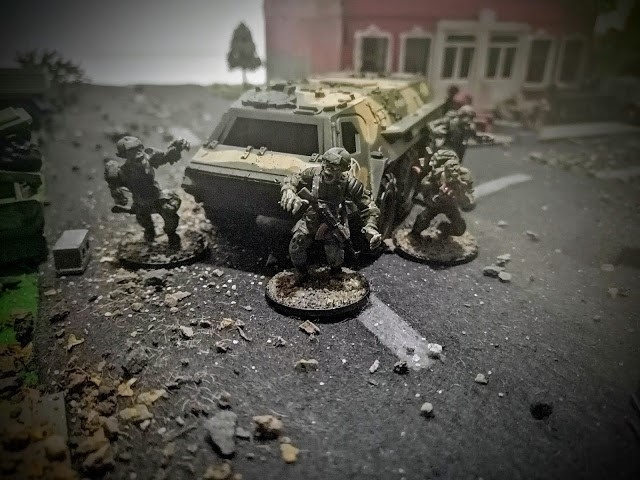 The veteran moves across an alley to hide behind another house. Aiming down the alley he shoots at a visible zombie. The armor of the zombie saves it from death. Having the unload skill, the veteran empties his magazine and with four firepower dice the zombie is brought down. 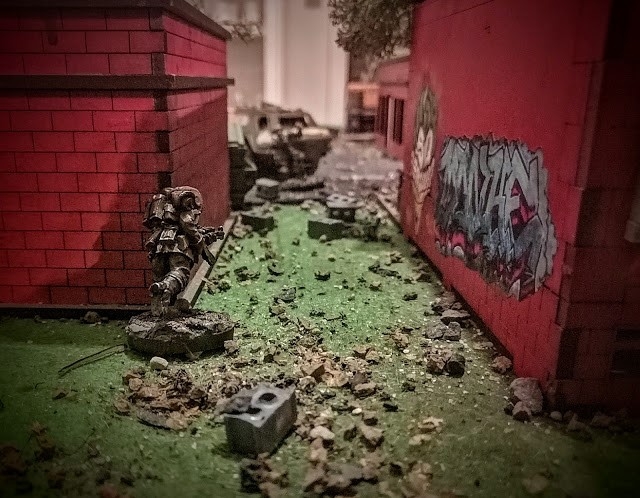 After the veteran's action, the monsters make the 8+ intervention roll and the take over the turn. Being within 12" of an objective, the last zombie and two dogs rush down the alley towards the veteran. This also take them out of sight from the rest of the unit - good for them. 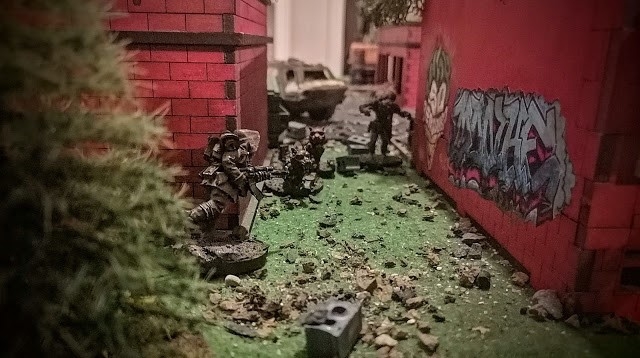 My LMG trooper moves up to the alley and scores four hits with the weapon, benefitting from both the steady hands skill and a red dot sight. He takes out the zombie, as this is a more dangerous target than a couple of dogs.

The immediate threat is the dogs in the alley, and I decided to start out with the LMG wielding soldier. This is the first time getting a critical when rolling dice and I quickly use the extra activation to take out the dogs closing in.

The monsters don't get to intervene at this time and the veteran (also in the alley) has a nice clear shot at the dogs on the other side of the street. Having three action points, he reloads his weapon just to unload it again. With the hail of lead he's able to take out the last remaining dogs and the objective is now clear of enemies. 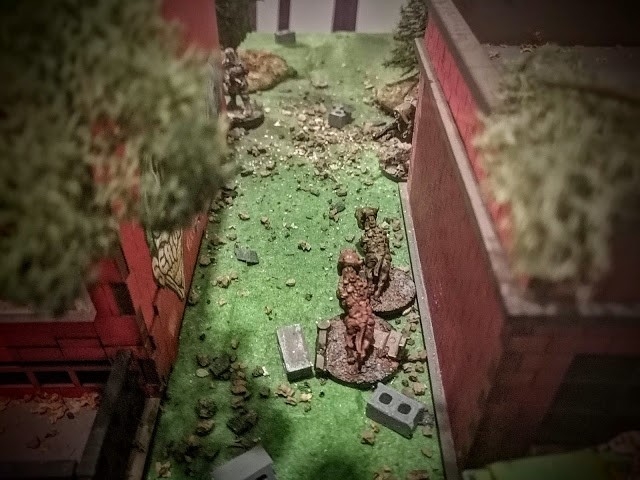 This turn as there's no danger and every man of the crew is running towards the armored vehicle. After a few failed attempts, the bone-doc manages to find the military attaché, a couple of grenades and a pair of binoculars. 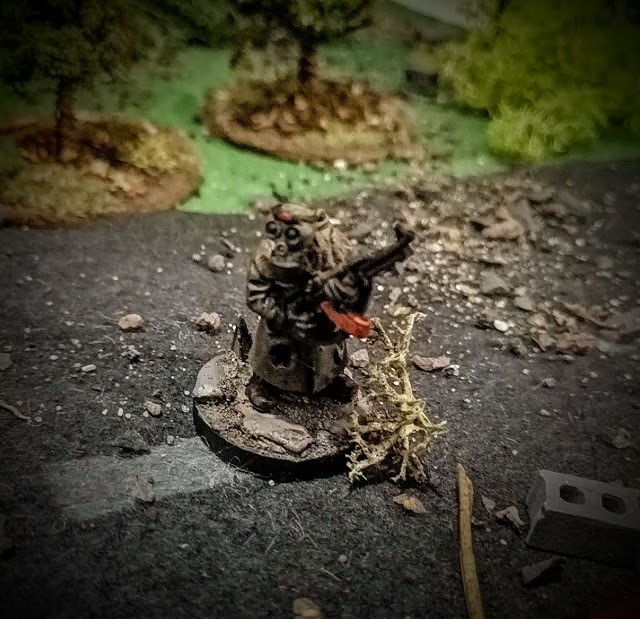 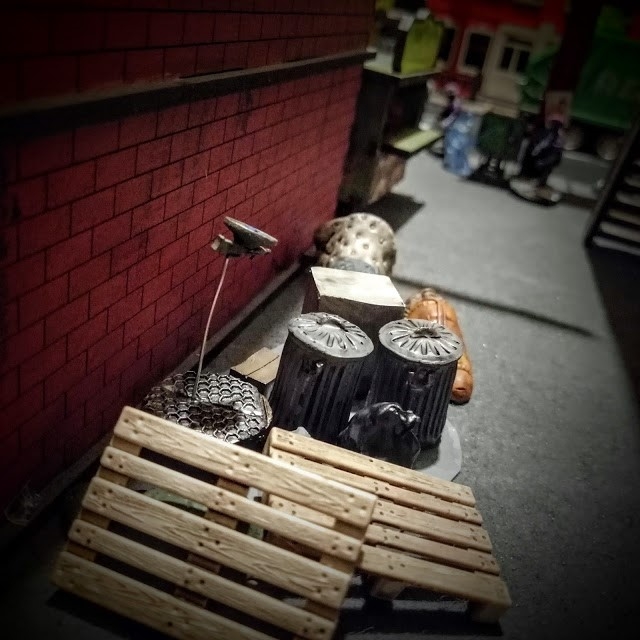 "Not too bad roaches, not too bad. We all made it out alive, found a few pieces of gear for the guys. Hey, you didn't even get scratched, burned or bitten!

Now let's take this attaché to the locksmith. There must be a reason for it to be hidden in that armored car and I don't want to wreck whatever is inside.

Go to the bar and get a drink. I know there's no rubles! Here, you can pay with a couple of 7.62 from those braindeads. I'll get back to you as soon as I get another hint to follow, this time we'll perhaps make it a bit deeper into the zone. 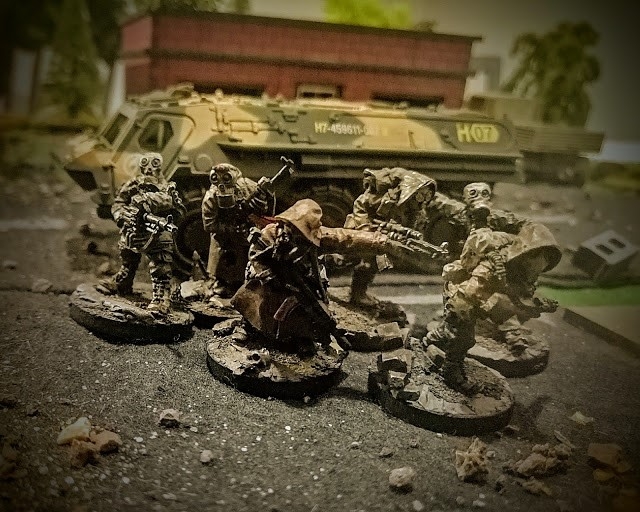 That was a fun little game! My crew made it out and got a bit of gear. The group earned a total of 8 advancement points - not enough for any kind of increase, but it's a start.

Perhaps the game would have been a bit more challenging if I hadn't forgotten those last couple of dogs. On one side, there was no opponnents to shoot at them. But that works both ways.

For the next scenario there'll be bandits with guns - that should change up things a bit. And hot spots. I'm looking forward to the hot spot part of the map. Because you have to get fairly close, the spawned enemies will be bigger trouble.

It's gonna be good, I'm looking forward to entering the zone again.

Want to head into the Exclusion Zone yourself? Order your copy of Zona Alfa here.