Jeremy Bai, one of the authors of the upcoming Righteous Blood, Ruthless Blades: Wuxia Roleplaying, is back on the blog to tell us about the drinking of alcohol in the upcoming game and the cultural inspiration behind it. This article also appeared on his blog, along with several others!

Some background about the cultural and genre inspiration for Righteous Blood, Ruthless Blades.

The drinking of alcohol plays an important role in Chinese culture, and it has for thousands of years. It’s especially prominent in the wuxia genre. For that reason, we included mechanics governing alcohol consumption in Righteous Blood, Ruthless Blades, including Signature Abilities related to drinking. However, the way drinking is portrayed in classic wuxia differs slightly from how it’s perceived by many in the gaming community, at least as it relates to kung fu and Chinese martial arts. Specifically, in my observation, there is a considerable emphasis on ‘drunken boxing’ or ‘drunken fist.’

‘Drunken boxing’ is a real-life type of martial art that imitates a drunk person’s movements. In my opinion, its popularity in Western media stems primarily from its portrayal in the 1992 Jackie Chan classic Drunken Master II. Of course, that was not the first time drunken boxing was portrayed on screen. Jackie Chan’s 1992 film was a loose followup to the original Drunken Master movie from 1978, and there are plenty of other movies that portray it. Although ‘drunken boxing’ does appear in other non-Chinese media before Drunken Master II (including Dragon Ball, Yu Yu Hakusho, and others), it wasn’t until the mid-1990s and later that it grew widely popular in the West. For instance, it appeared in Virtua Fighter 2 in 1994, in Mortal Kombat: Deadly Alliance in 2002, and in Jade Empire in 2005, to name a few. And it found its way into tabletop roleplaying games. For example, you can find it in the Everway supplement Spherewalker Sourcebook from 1996 or in the 2017 DnD 5e expansion Xanathar’s Guide to Everything, in which there is a Monk subclass literally called “Way of the Drunken Master.” 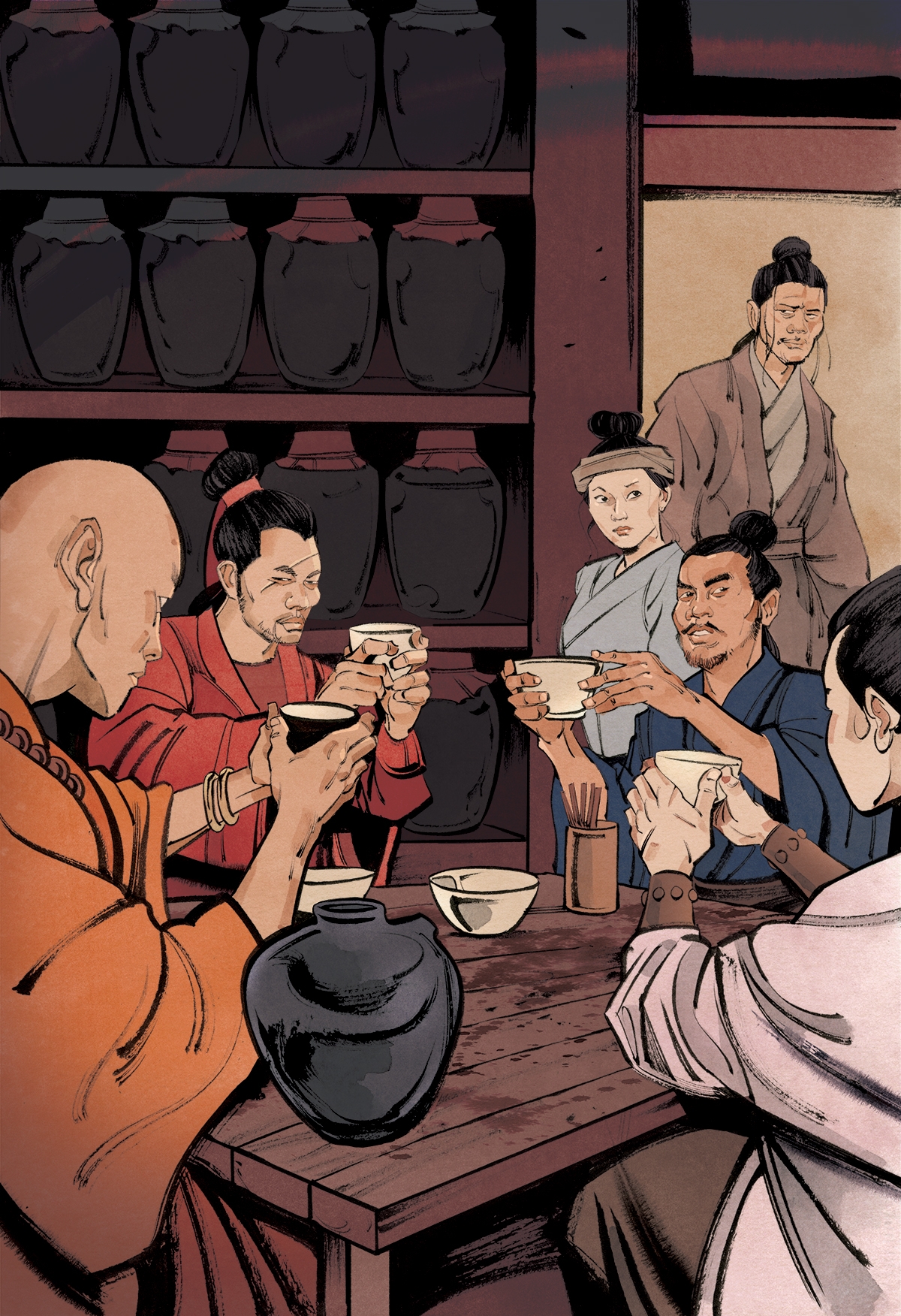 That said, the idea of a martial artist who becomes drunk and then fights in a stylistically drunken fashion is not something incredibly common in wuxia. In fact, martial arts heroes are often portrayed as having an extremely high tolerance for alcohol. While they can get drunk, that doesn’t, by definition, improve or deteriorate their fighting ability (although it can do either depending on the whim of the author). Sometimes, the characters can become completely sober at a moment’s notice, making it questionable whether they were ever really drunk to begin with. For instance, here is a passage from an unlicensed translation of Gu Long’s Sentimental Swordsman, Ruthless Sword, which I edited to improve readability.

Some people say that ‘when you drink to ease distress, you only cause more distress.’ That's not entirely accurate. A small amount of wine can make one remember more of the past, including more painful memories. But when a person becomes truly drunk, then they will forget everything.

Li Xunhuan knew that, so he drank as if his life depended on it.

It’s usually not hard to get drunk. But when a man has enough problems, he will drink more often than an average person. Then, when the time comes that he absolutely needs to get drunk, he won’t be able to.

The sun had long since set, and the night was dark.

Li Xunhuan had consumed a lot of wine, but didn't show even a hint of being drunk.

He suddenly realized that no one else in the room was drunk either. Almost twenty people had been drinking this entire time, yet none of them were drunk. It was definitely unusual.

In the above passage, the consumption of alcohol is tied to past emotional trauma. But there are plenty of examples in wuxia stories where there is no negative stigma attached to drinking and getting drunk. For instance, here’s a clip from the 2008 TV drama version of Jin Yong’s classic Legend of the Condor Heroes. In this scene, the Seven Freaks of Jiangnan compete with the Daoist priest Qiu Chuji in drinking.

Here is more detail from the novel, also an edited version of an unofficial translation of the story.

Seeing that even after 28 bowls of alcohol Qiu Chuji was still looking sober and normal, the Seven Freaks were quite shocked….

Quan Jinfa calculated that his side still had five participants left, each a heavy drinker who could probably drink for three or four more rounds. Their opponent couldn’t possibly hold another twenty or so drinks in his belly, or could he? Even if he really was incapable of getting drunk, his belly could only hold so much.

To emulate this wuxia trope, characters in Righteous Blood, Ruthless Blades have a Drinking Limit that governs how much alcohol they can consume. If they surpass that limit, they must make a Drinking skill roll. Succeed, and they can continue to drink alcohol past their limit. If they fail, they pass out. Other related mechanics go along with alcohol consumption, including various bonuses and penalties, but I won’t detail them here. Suffice it to say, alcohol can play a significant role in the game if the GM wishes to emulate Chinese culture and the wuxia genre in that way. There are many details provided in the sourcebook regarding Chinese drinking culture and how players and GMs can use it in the game.

Of course, there is no universal rule for how alcohol works in a wuxia setting; different authors handle it differently, and even individual authors can change how they use it from novel to novel.

Something else to consider is the type of alcohol being drunk. The character for alcohol (酒) is often translated as “wine,” but that can be deceiving, as 酒 covers all types of alcohol, including beer, grape wine, distilled liquor, and a host of other alcoholic beverages, including Chinese varieties that aren’t common in the Western world. In wuxia settings, the “wine” mentioned would likely not be grape wine unless specifically said to be, as grape wine has only become a common beverage in China in recent years. In most cases, the alcohol consumed in wuxia settings would be either yellow wine or baijiu.
In Righteous Blood, Ruthless Blades, we made baijiu the drink of choice for a few main reasons. First, baijiu is far and away the alcoholic beverage of choice in today's China, and we wanted to create a thematic connection to modern gamers. Second, the famous wuxia author Gu Long was a big fan of liquor, and we sought to pay homage to him. The third reason is more personal. One of the earliest contributors to the game was my cousin-in-law Guo Feng, a wuxia fanatic that I would consider an unofficial ‘wuxia expert.’ He was deeply familiar with the works of all the prominent wuxia authors, and provided a considerable amount of very helpful input. He was also an enormous fan of baijiu. Some of my fondest memories of time spent with extended family in China are of drinking baijiu with him while talking about the works of Jin Yong, Gu Long, and other famous novelists. Sadly, Guo Feng passed away in 2019, long before he could ever see Righteous Blood, Ruthless Blades in print. Although I don’t mention it in the book, our collection of unique varieties of baijiu provided in the rules is also an homage to him.

As for Gu Long, he would even mention specific brands of alcohol in his works. For example, here’s a passage from Dragon King with Seven Stars.

Four more beautiful women, dressed like the others, came in carrying a leopard skin stretched between two bamboo poles. On the leopard skin was a jug of alcohol.

Smiling, the four women placed the Maotai down in front of Ingot.

Guizhou Maotai is arguably the most famous baijiu brand in modern China, albeit somewhat of a modern one. In Dragon King with Seven Stars, Gu Long mentions several other brands of baijiu, as well as some specific types of yellow wine and even imported beverages such as Persian wine.

Technically speaking, the inclusion of baijiu could be anachronistic, depending on the time period of your campaign or adventure inRighteous Blood, Ruthless Blades. Some sources indicate that alcohol was being distilled as far back as two thousand years ago in China. However, it probably wasn’t until about a thousand years later in the Song Dynasty that baijiu became a common beverage. And it probably wasn’t until hundreds of years later that distillation technology reached the point of producing beverages like those consumed today, with a high percentage of alcohol by volume. In other words, if you want your game to take place in a specific historical setting, you might want to do further research to maintain accuracy. A historically accurate campaign set in the Tang or Han dynasties, or the Three Kingdoms or Warring States periods, might not have baijiu in the setting at all.

That said, we encourage a more anachronistic approach in Righteous Blood, Ruthless Blades, which is intended to fit any time period in Chinese history, and any general region within China. And historically, anachronisms are common in wuxia novels and movies, so gamers shouldn’t feel compelled to focus too much on accuracy.

In keeping with the anachronistic flair of wuxia, we include a collection of extraordinary and fictional types of alcohol in the sourcebook. For groups wishing to have historically accurate games, some additional research will go a long way in making that happen. And for those groups who don’t care about historical accuracy, you will have a great time just picking up the game and running with it.

As usual, if you have any questions or comments, please reach out to me via the social media links listed at the bottom of the page. For more information about me, check out my website. And if you haven't already, make sure to preorder the game now!

For those of you who have read to this point, I will leave you with a great clip from the wuxia cult favorite Kid with the Golden Arm, featuring one of the greatest ‘drunken’ wuxia heroes of all time, the imperial constable Hai Tao.

Righteous Blood, Ruthless Blades: Wuxia Roleplaying is an upcoming addition to the Osprey Roleplaying line written by Brendan Davis and Jeremy Bai. It publishes in December - preorder your copy today!