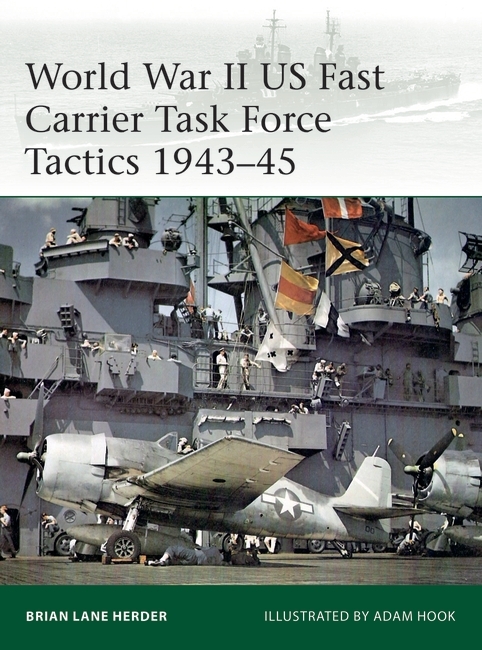 The American carrier war in the Pacific is among the most popular subjects of World War II. Overwhelmingly, books about the Pacific carrier war tend to focus on the actual battles fought, the hardware used (planes and ships), and/or the personnel experiences (usually that of the flyers, but occasionally the admirals and captains). I find all that exciting and informative. I’ve also read it many times, and the older I get, the more frustrated I become to constantly run into cheap throw-away phrases without the author ever enlightening me as to what exactly they are talking about. The perfect example that always appears regarding carriers, but is never explained, is “turning into the wind” – what does that mean? Does the carrier turn upwind? Downwind? Why does wind even matter if carriers have catapults? Finding a good explanation for that simple phrase was the original genesis for the book World War II US Fast Carrier Task Force Tactics 1943–45.

Incidentally, my favorite aspect of history is learning the “nuts and bolts” of how real-life human beings actually made day-to-day things work. In military history, this tends to comprise such abstract concepts as administration, organization, doctrine, and logistics. Unfortunately, this is the part of military history that historians tend to gloss over. But without understanding how history happened, you can’t really understand what happened, or why. For almost 20 years, I scoured bookstores and bibliographies to find a definitive source explaining to me wartime US carrier tactics and doctrine. I never found one. Knowing virtually nothing, I decided to research and write such a reference myself. Almost every sentence in this book was intended to answer questions I have had about how wartime US fast carriers operated.

As an author, anytime you research and write a nonfiction book, you have to deal with the issue of scope – basically, “How big and wide-ranging will my topic be?” Certainly many people would like to see a book about World War II aircraft carrier tactics in general, which would cover all three major World War II aircraft carrier navies - the United States, Japan, and Britain. A finite book size is always an issue, but in this case an additional issue is that the wartime carrier doctrine and tactics of all three navies were different. In addition to the doctrinal differences between the three major navies, there was actually quite a bit of difference between US carrier forces’ make-up and doctrine of 1941–1942, which were developed pre-war, and the US Fast Carrier Task Force of 1943–1945, which exploited wartime construction, wartime experience, and wartime technology. In almost every major way, these were two different weapons systems. I chose to focus on the US Navy’s 1943–1945 Fast Carrier Task Force, which, unlike its predecessors, was unquestionably a decisive weapon system of the Pacific War. However, 1943–1945 US fast carrier tactics naturally evolved from pre-war and 1941–1942 US carrier doctrine, so my book’s narrative does not simply ignore these earlier periods.

We mostly remember the US Fast Carrier Task Force of 1943–1945 as Task Force 58, which was under Vice Admiral Marc Mitscher and his overall Fleet commander, Admiral Raymond Spruance. This exact same force, when under the command of Vice Admiral John McCain and Admiral Bill Halsey, was designated Task Force 38. The task force itself is best known for its carriers and its carrier aircraft, but in reality, the FCTF was an integrated combined arms weapons system comprising fast carriers, fast battleships, cruisers, destroyers, and the carriers’ fighters, dive-bombers, and torpedo bombers. Did carriers automatically supplant battleships after 1941–1942, like so many historians claim? The related question is this: did the US Navy actually underrate aircraft carriers before Pearl Harbor, or is that a convenient myth? We know that Spruance and Halsey each tried to get the carriers’ escorting fast battleships into a surface battle at the Philippine Sea and Leyte Gulf. If such a surface battle had transpired, what would it have looked like?

The book addresses a number of obvious doctrinal and tactical issues most commercial histories skip over. It explains what exactly the Fast Carrier Task Force was, and why it was so important for the US carriers (and their escorts) to be fast. It illustrates what an American carrier Task Group battle formation looked like, and explains the logic behind its tactical lay-out. We explore the command organization of the entire force, beginning with Spruance and Halsey as Fleet commanders, on down to midlevel officers in charge of departments on individual US carriers. We also explore the tactical make-up and command organization of the individual carrier air groups and squadrons themselves. We survey the methods, procedures, and technologies US officers used to communicate with each other within the carrier, between ships, and between the carrier and her aircraft.

Over half of World War II US Fast Carrier Tactics 1943–45 examines actual air tactics and air operations, including night operations. Before I researched this title, I knew nothing about how American carriers organized their hangars and flight decks, and how they executed launch and landing cycles. However, I knew it must have been a complex and highly choreographed ballet to keep everything running smoothly, and to keep planes from simply running out of fuel and crashing. So how did wartime US carriers run their air operations, and what was the reasoning behind it? How long did it take to prepare and launch a coordinated strike? At what range could US carriers strike enemy targets? How long did a strike mission take, and what different kinds of strikes were there? How did wartime US carriers and carrier air groups operate at night? How did the size and composition of a US carrier air group change over the course of the war, and why? American carriers in World War II had catapults to launch their planes. So why were they so rarely used? Writers have spilled much ink about the wooden flight decks of World War II American carriers versus the supposedly superior steel flight decks of their British counterparts. Were steel flight decks clearly superior to wooden flight decks, or have mainstream historians missed something?

We won’t ignore US carrier defensive tactics, either. For example, we explore how far away US task forces could detect incoming enemy strikes on radar, how much time this gave them, and how interceptions were organized and coordinated. “Combat Air Patrol” (CAP) is another buzz phrase that historians sling around without explaining. Here we examine the concept. What exactly did a US carrier’s “Combat Air Patrol” look like? How big was it, and where and how high did it patrol in relation to the task force? Were there different types of CAPs? How did US fighter directors use radar and communication technologies to direct the CAP to intercept the enemy? Of course, enemy strikes sometimes broke through, so we examine anti-aircraft fire, evasive maneuvering, and the art of carrier damage control. Japanese tactics naturally evolved throughout the war. How different were the 1944–1945 kamikaze attacks from conventional Japanese air strikes, and how did the Americans adjust?

An enduring image of the Pacific War is a US oiler refueling two carriers or battleships alongside at the same time. Clearly, logistics were vital in the vast Pacific. How exactly did the Americans sustain US carrier task forces at sea? We explore the methods behind wartime at-sea replenishment, as well as the US Navy’s overarching grand strategy that made extensive forward logistics so crucial to US strategy.

Order your copy of World War II US Fast Carrier Task Force Tactics 1943–45 from the website here to find out more.