This week we're taking a look at the US troops that took part in the invasion, giving you useful references to help you prepare your forces.

Extract from Elite 219: US Assault Infantry (1) by Gordon L. Rottman 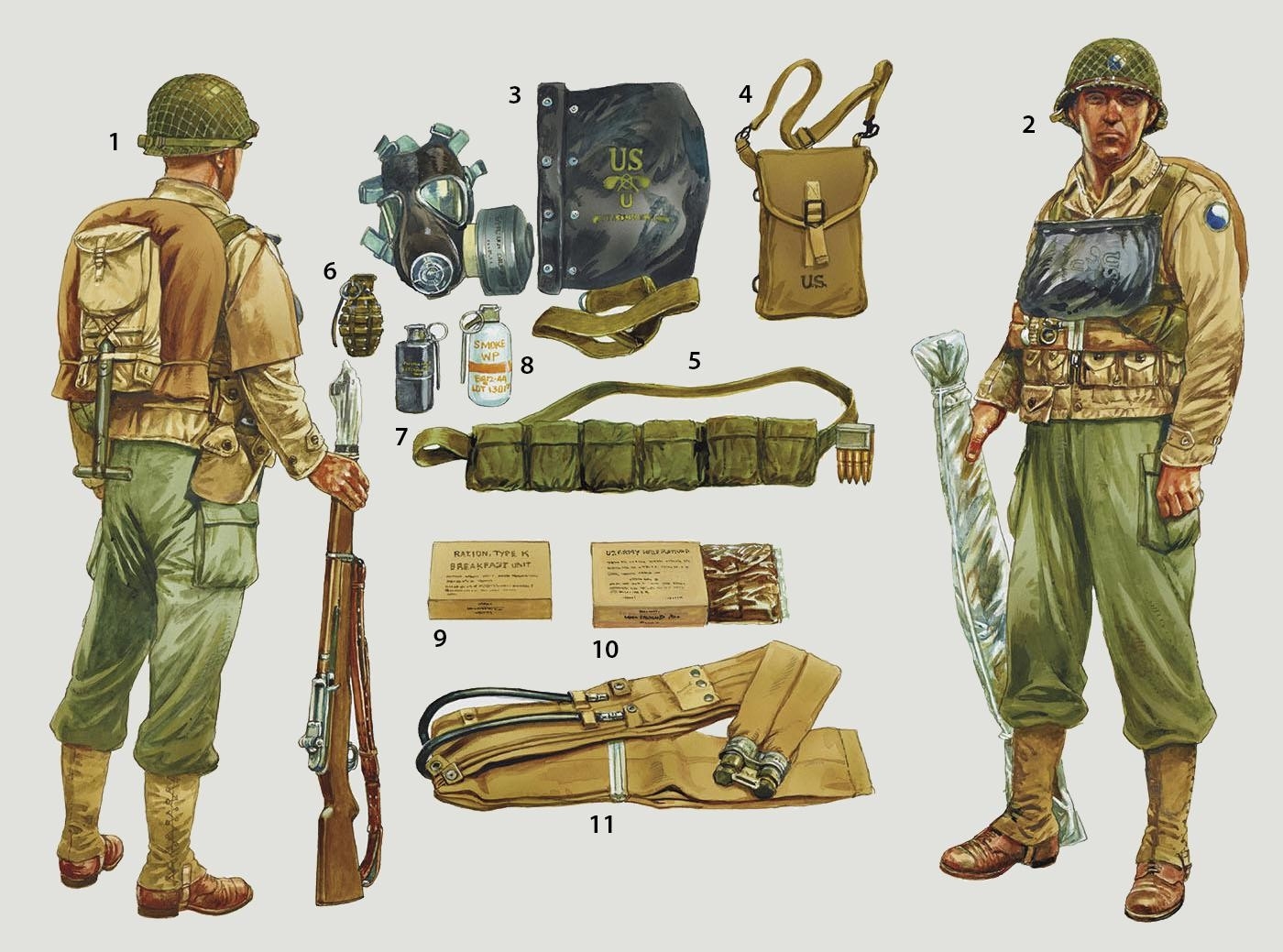 The amphibious operation required the issue of life belts and the waterproofing of weapons and other sensitive equipment; extra attention was also given to the possibility of the Germans using chemical weapons (note A1's gas-detection brassard on his right arm). These soldiers wear M1 steel helmets with the 29th Div sign stenciled on the front, just visible under the camouflage net. The “M1941” Parsons field jacket, bearing the same insignia on the left shoulder, is worn over the M1943 herringbone twill fatigue uniform, impregnated for the Normandy operation with an anti-gas compound. The basic web equipment of an M1923 cartridge belt holding ten clips for the M1 Garand rifle was augmented with at least one M1 bandoleer carrying another six clips; the belt also supports an M1910 1-quart canteen and cover at rear left and an M1942 first aid pouch at front right. The M1928 haversack has a blanket roll tied on, and an M1910 entrenching tool and M1 bayonet in M7 scabbard attached. Finally, these soldiers both have the M5 assault gasmask, and the M1926 inflatable life belt. Their Garands are protected for the landing with either a condom taped around the muzzle, or a Pliofilm bag; the rifle was inserted into this butt first, and the end folded over and tied or taped – if necessary the weapon could be fired while still bagged.

(3) M5-11-7 assault gasmask with its M7 case. It was usually strapped on the chest with the opening edge upwards, but some photos show it attached sideways, or even to one leg. The watertight M7 case was credited with saving some men from drowning, since it offered some buoyancy.

(5) The disposable M1 ammunition bandoleer for 48 rounds of rifle ammunition, with one of the 8-rd clips that was loaded into the Garand en bloc.

Riflemen carried an assortment of hand grenades, including:

(7) Mk IIIA2 “concussion” or demolition; and

(9) The cartoned K-ration meal (issued three per day) was often carried in the trouser cargo pockets; this is a pre-1943 carton in plain buff card, still in use in 1944 alongside the later pattern with brown, dark blue, and green color-coding for breakfast, dinner, and supper meals, respectively.

(11) The M1926 life belt was inflated by triggering two internal CO2 cartridges, and could be topped up by mouth using the external tubes. The belt was fastened by a zinc hook-and-ring type buckle marked “U.S.N.” 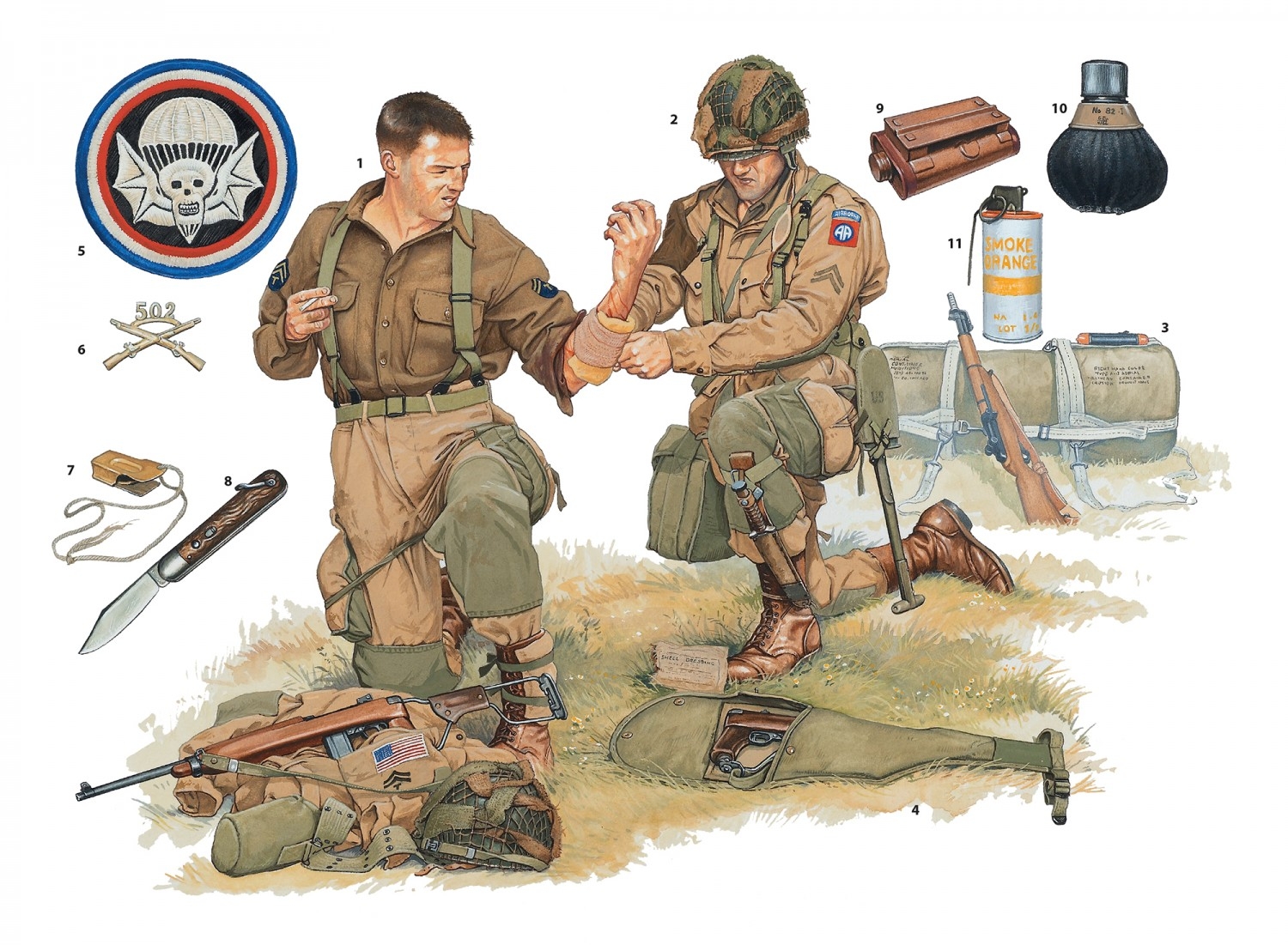 Beneath their jumpsuits the paratroopers of the 82nd and 101st Abn Divs wore the wool flannel shirt and wool serge trousers, both in “olive drab” – though the former was actually a dark tan shade and the latter a mustard-brown. Over the wool uniforms some wore green OD herringbone twill fatigues, impregnated with an anti-vessicant (anti-mustard gas) compound. The riggers of both divisions modified one jumpsuit per man for the Normandy operation. This involved adding impregnated HBT reinforcement patches on the elbows and knees, and also inserts into the bottom and sides of the jacket skirt pockets and expanding trouser pockets. These prevented pocket bottoms ripping out with the shock of the canopy opening, or simply when over-filled. Paratroopers stuffed their pockets with everything from grenades to D-ration bars, and in the 505th PIR the specified pocket contents totaled almost 9lb in weight.

The technical grades, established in January 1942, were a way of recognizing specialist skills, but such men were considered junior to the line NCO leaders. However, they could be assigned as assistant squad leaders – a corporal's position, or a sergeant's from December 1943 – and the Tech 5 or Tech 4 would be addressed as “corporal” or “sergeant”. This Tech 5 has peeled off his web gear and jacket to allow an arm wound to be dressed. As well as their own first aid packets paratroopers were issued these British “shell dressings”; at 6in x 8in opened the pad was larger than the US type, and was pre-medicated. Note that while the jump trousers could be held up by the M1937 web trouser belt, most men used suspenders. His discarded jacket shows the flag patch on the right upper sleeve. His weapon is the folding-butt M1A1 carbine.

This “hard-stripe” NCO also has the M1C helmet with netting and burlap garnish, and the same uniform, showing the 82nd Abn Div patch and roughly handpainted rank chevrons on his left sleeve. On his right upper arm is the pale brown British-made gas-detection brassard looped to the end of his jacket epaulet; the impregnated paper would turn pink-red in the presence of gas. His M1 rifle (background) has an M7 grenade-launcher attached, and he carries a slung grenade bag in addition to web gear based on the M1923 rifle cartridge belt. Note the M3 knife attached to his ankle, and the old T-handle M1928 entrenching tool still being carried. (In North Africa the 505th and 2/509th had used a cut-down version of this.)

The canvas and web “para-pac” measured 56in long (including its parachute compartment at one end) by 15in diameter, and here has a Type A-1 assembly lamp fitted. Colored filters over the lenses at both ends identified the pack contents on a dark DZ – here, red for ammunition (the canopy of the 24ft G-1 cargo parachute would also be red). Individuals sometimes carried these lamps as assembly aids.

(4) The “M1 carbine holster” held the M1A1 (but not the wooden-stocked M1) during the jump, and could also be used to carry it when on the ground.

(6) Infantry officer's collar insignia with regimental number; all regiments had these, for use on dress and service uniform collars in conjunction with the “U.S.” cipher.

(7) Unique to the Normandy operation, the brass “cricket” was much more widely used in the 101st Abn Div than in the 82nd; some were punched with a hole for a retaining cord. Scattered paratroopers used it as a friend-or-foe identifier, pressing it to make a “click-clack” sound, to which the correct response was “click-clack, click-clack”.

(8) The M2 pocketknife was issued to all paratroopers to cut themselves free of suspension lines and harnesses if necessary. It had a 3in switchblade, and was carried in one of two small pockets under the collar of the jump jacket.

(9) Two types of British AT grenades were issued to the US paratroopers. The No.75 Mk II “Hawkins” mine-grenade could be used in either mode, and was detonated by a pressure plate; two thrown into a tank's track would break it. The Hawkins was 6.55in long x 3.75in wide x 2.25in thick.

(10) The No. 82 Mk I “Gammon” grenade was impact-detonated; its expanding fabric bag could be filled with varied amounts of plastic explosive.

(11) The US M16 smoke grenade was available in red, orange, yellow, green, blue, violet and black. The orange was first used in Normandy to mark “friendly” locations for supporting aircraft and naval gunfire observers.