The popular image of the Viking is that of a ferocious warrior; an abnormally large-muscled man with bare arms, a magnificent beard, horned helmet, and armed with a double-headed weapon. But is this a realistic depiction of men in the Viking Age?

Today on the blog, we’re looking at Gareth Williams’s new book Weapons of the Viking Warrior, which explores the development, use and impact of the weapons used by Vikings. We’ll be assessing a couple of potential myths about the Vikings, which Gareth explores in his book, but if you would like to discover more about their success in battle, be sure to order your copy!

Viking as a Warrior 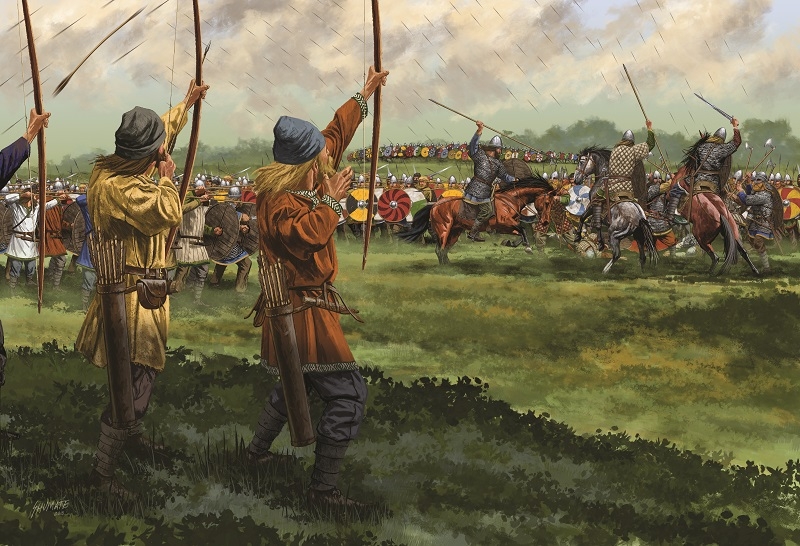 Vikings in battle, mid-10th century
Artwork by Johnny Shumate featured in Weapons of the Viking Warrior

The prevalent image of the Viking in popular imagination is of a warrior. Despite repeated attempts since the 1960s by museums and broadcasters to promote more peaceful achievements, popular culture and literature has seemingly become incessant on depicting Vikings primarily and foremost as ferocious fighters. Even museum exhibitions across the world have symbolised and marketed themselves with swords and helmets. While this may be an essential element of the Viking existence, and one we’re investigating today, it was only one aspect of the Viking Age, as Vikings possessed an abundance of peaceful achievements too.

Most popular representations of the Viking warrior also fail to base themselves in fact, perpetuating myths many still associate with Vikings today.

Arguably the most popular misrepresentation and depiction of the Vikings, and one that continues, is the adoption of the horned helmet. This decorated helmet may look impressive but is sadly not factual, despite it still being a part of their legacy.

As proposed in Weapons of the Viking Warrior, this image has stemmed from 19th-century romanticism, bolstered by imagery drawn from Viking films, and the growing Fantasy genre of the 20th and 21st centuries. These depictions permeated popular culture and our perceptions of the Vikings. While the Celts did adorn their helmets with wings or horns, there has been no evidence for Vikings doing the same, and yet cartoonists, corporate branding and manufacturers of tourist souvenirs continue to conjure up an image that is immediately recognisable as ‘Viking’.

With popular depictions of Vikings’ helmets being wrong, is it any surprise that one of the most commonly associated weapons of the Vikings is also inaccurate?

The double-headed axe is presented as an equal half-moon blade on either side of the shaft, and is heavily used in Fantasy art. Vikings wielded axes of incredible size, but evidence suggests that they only ever swung single-headed axes, which were likely just as useful.

It is probably unsurprising that popular representation of a double-handed sword or a large hand-and-a-half sword were also false. These elongated designs were used as weapons, but not until much later after the Viking Age, and yet many television programmes and films have their Viking warriors smashing through their opposition with these double-handed blades.

To find out more about the incredible weapons that were actually used by Vikings, and to see why Gareth Williams thinks these myths have persisted, be sure to order your copy of this incredible new book, Weapons of the Viking Warrior by clicking the title.

Also, if you’re in the UK, the annual Jorvik Viking Festival is casting a light on women during the Viking Age, and runs until 27 February. Click here to find out more.